Against the odds: The USSR and East-West Germany energy relations

Many analysts and politicians consider the current political crisis between Russia and the European Union as part of a long-term negative trend that will lead to a further decrease in cooperation between the two parties. In reality, the current crisis is rather a temporary one that mostly concerns the state of relations between Moscow and Brussels, but does not damage the relations between Russia and individual member states that much. As history shows, an increase in cooperation is not only possible, but it can also be sought after in times of severe political tension. The best example is the case of the East-West Germany relations with the USSR. Despite the uneasy political circumstances during the Cold War and political sensitivity concerning the issue of cooperation between the two German states, the USSR and West Germany managed to establish the base of the gas interdependence model, which was to become a backbone of the contemporary EU energy security. In a time of severe political crisis the two adversaries managed to build a long-lasting cooperation based on a sensible economic model that benefited both sides. Who could have predicted such an outcome? In the late 1960s both the Federal Republic of Germany and Germany's Democratic Republic showed significant interest in developing the gas industry of the two states. The 1973-1974 surge in oil prices urged many countries to seeks diversification away from oil towards other sources of energy. Natural gas seemed to be the most prospective alternative. During the 1970s natural gas production in the Soviet Union demonstrated a sharp increase, as a result of the opening of giant natural gas fields in Siberia and implementation of large diameter pipelines, used to connect the extraction points with the large consumption centers in the West part of the USSR. The gas relationship between the FRG and the Soviet Union began its history in 1970 with the signing of a 20-year contact between the Soviet Foreign Trade Ministry and the West German company Ruhrgas. The deal was part of a much larger arrangement know as “gas for pipes”. Two additional contracts were signed in 1972 and 1973, which further intensified the cooperation and set the stage for the emergence of the gas interdependence model. Coincidently or not, in 1973 both the GDR and FRG received their first deliveries of natural gas. The subsequent cooperation was based on long-term oil-indexed contracts, spanning between 20 and 30 years with minimum take-or-pay prerequisites requiring between 75 and 85 percent of the quantity to be purchased.

In 1980 the supplies to the two German republics reached a cumulative quantity of 17.2 bcm of natural gas, which was arriving through different pipelines. Despite the increase in gas cooperation, supplying energy to West Berlin remained a problematic issue because the city has been cut off from other sources of electricity since 1952 and could use only coal and oil. Building a pipeline to West Berlin had to pass through the territory of the GDR. Despite the very short additional span of the pipeline that needed to be constructed in order to reach West Berlin, the issue posted a serious political risk and unpredictable consequences for all parties.

The 1981 Urengoy long-term gas pipeline contract with Germany’s Ruhrgas proved to be a game changer. The initially contracted deliveries under the contract were 10.5 bcm per year. The potential profitability of the project was so immense that the Soviet Union was ready to make concessions and apply pressure where needed in order to secure the successful realization of the deal. Amendments to the contract envisioned prospective supplies to West Berlin starting from 1985 – this was a key point that held a great significance for what was about to follow. 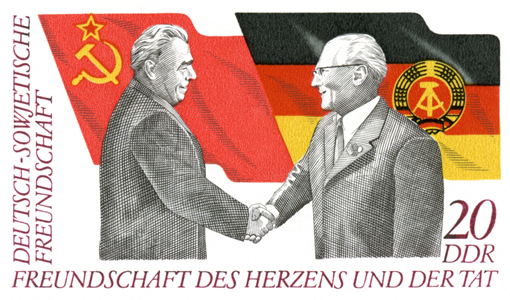 The increase in energy cooperation between the USSR and West Germany was not perceived positively on the other side of the Atlantic. Natural gas exports from the USSR to European countries faced serious resistance from the United States. The newly elected Reagan administration was adamant in its quest to limit Soviet influence over the old continent. Some American leaders even expressed convictions that increased dependence of European countries on Soviet natural gas supplies will make them vulnerable to political pressure under the threat of cutting off gas supplies (pretty much the same rhetoric that we hear nowadays). The pinnacle of the Anti-Soviet campaign was reached during the 1981 meeting at the Ottawa summit, where President Ronald Reagan attempted to convince European leaders not to accept any further natural gas supplies from the USSR (sounds familiar 1,2,3). The failure to convince his European partners left the Reagan Administration with the only remaining option – to impose sanctions on gas compressor station elements, that were produced in the US. This eventually led to a major political crisis and the sanctions were removed several months later. The Urengoy pipeline constructions continued and as a result of the previously imposed sanctions the pipeline was largely built with the usage of Soviet equipment through import substitution (once again a familiar scenario4).

By the time of the fall of the Berlin Wall in 1989, Soviet deliveries of natural gas to West Germany comprised around 30% of its total consumption. What’s more, at that point in time deliveries to West Berlin had proceeded without being interrupted for several years. Despite the significant vulnerability of West Berlin in a case of a conflict or crisis and the serious objections from the United States concerning energy security and perceived dependence, the energy cooperation established solid roots and intensified. Even more unpredictably, less than a decade after the first deliveries of gas to West Berlin were carried, Germany reunited and a very strong and successful gas industry was built as a result. The reunification of Germany led to the unification of gas industries. The company Verbundnetz Gas (VNG) was created from the East German gas company Schwarze Pumpe with additional equity from West German companies, namely BEB, Ruhrgas, and Wintershall. The creation of the VNG was followed by an increase in investments in local pipeline distribution networks during the 90s. Subsequently, gas demand in the eastern part of Germany increased from 12 bcm in 1990 to 16 bcm in the year 2000. The composition of the natural gas also changed significantly. While in 1990 only 60% of the total volume was of high CV (caloric value), in 2000 nearly 90% was of a high CV. Furthermore, the share of coal usage in residence heating fell dramatically from 73% in 1989 to 10% in 1998. The intense gasification of the eastern part of Germany and overall increase in the usage of natural gas in the country not only supported the rapidly growing German economy, but it also helped in cutting down greenhouse gas emissions through the substitution of coal with the more eco-friendly natural gas. Nevertheless, low coal prices continue to make coal an attractive energy source for Germany, even nowadays. The case of energy cooperation between the Soviet Union and the two German states is a lesson from history that we should all learn from. The situation then is in many aspects similar of the current crisis – political tension, sanctions, and pressure from the US, just to name a few. Nevertheless, one way or another the crisis will be solved and leaders from Europe and Russia should acknowledge that the cooperation between Russia and European states is a natural one that should be encouraged and sought after, despite the problems that exist.

Högselius, Per. Red Gas: Russia and the Origins of the European Energy Dependency. Palgrave Macmillan. 2013.