Military and Security aspect of the Kosovo crisis Part I

Imagine a part of the U.S.A., from which the U.S.A. started - where is the cradle of your history? This is Kosovo for Serbia. Novak Djokovic, world tenis player No 1

In NATO bombing of Yugoslavia which began on 24 March, 1999. more than 2,000 people have been killed and nearly 5,000 wounded. There were severely damaged infrastructure, commercial buildings, schools, hospitals, media houses and monuments...In addition to the stability of Bosnia and Herzegovina, unilaterally proclaimed independence of Kosovo is a key area of interest of the international community and the countries in the region. These missions are priorities for the United States and NATO for years to come and involve a total restructuring of the Balkan security system by all the European security organizations along with the United States.

Events and developments around Kosovo in the last decade have directly contributed to the elements addressed in Serbian National Security Strategy, and that the sovereignty and territorial integrity of the country. It is more than clear, that Serbia needs to meet the challenge that lies ahead. But the question is how to do it, with virtually destroyed economy and constant surveillance and the activity of the countries that have recognized the unilaterally proclaimed independence of Kosovo and Metohija? Intelligent policy on the walk in a minefield was the only solution .David did not beat Goliath with power, but by cunning and cleverness... 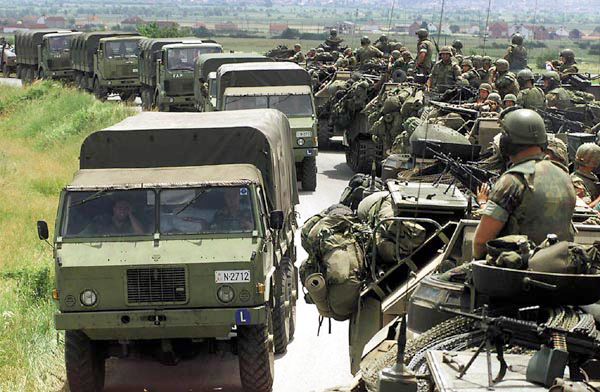 The signing of the agreement on the normalization of relations between Belgrade and Pristina, the security situation in northern Kosovo has improved but remains fragile. Security services monitor developments in northern Kosovo to be able to timely warn of possible deterioration of the security situation but, for now, there is no reason for concern. But in the medium and long term danger still exists.

The first risk is the transformation of the Kosovo Security Forces which was established in January 2009 according to the Ahtisaari Plan, into Kosovo Army. Serbs in Kosovo will never be able to accept that military power as a guarantor of security, or that the Army of Kosovo will be friendly towards Serbia. Second, security risk is the possibility of some paramilitaries in Kosovo in addition to the direct damage, they can make a major problem in diplomatic circles if they be used as an instrument of someone's actions.

Creation of a Kosovo army is the last step in completing the Kosovo's statehood. Troops already have infantry units, special forces, honor guard, light and medium weapons, heavy machine guns on armored cars. They have uniforms, emblems, tactical units, and the main tactical composition of the battalion as the other normal armies of the world. A few years ago some European officials have stated that they wish to see Kosovo flag among military contingents in Afghanistan in the period that coincides with today's. The Minister of Security Forces, Agim Ceku, has publicly advocated for this cause, claiming repeatedly since early 2013 that “this is going to be the year of the Kosovo Army.”

The moment it happened all the story would be over. KSF has about 2,500 members, that number will increase, but these forces exist on a symbolic level and the extent to which they can be an instrument of foreign policy so Kosovo could send troops to peacekeeping missions.

"This process should be completed by the end of the year and we will immediately make recommendations to the government and our partners in NATO, what is needed to ensure that Kosovo should be safe and be able to support the building and preserving peace around the world "Ceku said. But the wishes are one thing and reality is another.

Hard to believe Kosovo would do anything without getting the green light from Washington, especially given the fact that Kosovo still is pretty much a legal black hole, can't be left to its own devices. If Kosovo is indeed defying the US, then we shall start wondering which country really has the greatest influence upon it. Regarding certification by NATO, it is not so unlikely to happen. Formal recognition of Kosovo by all members may remain impossible for quite some time, but its membership in international organizations is not seriously objected to. So whether KSF receives this approval/certification will not really depend on its recognition status, but on other, background factors.

Establishing a national army for Kosovo though, raises serious concerns for NATO regarding the future relationship of this new army with the Alliance. At NATO’s headquarters in Brussels, there is a clear consensus that NATO will seek to maintain and prolong its relationship with the KSF, aiming to postpone the transformation of the KSF into an army to sometime in the future. Reviewing NATO’s operation in Kosovo, NATO Chiefs of Defence on September meeting in Budapest, welcomed the progress made in terms of security and stability. “Our intention is to gradually reduce the size of KFOR when conditions allow. Any further decision will be taken based on real improvements on the ground,” emphasized General Bartels. In the case of reduction of KFOR troops, it will means that the preparations for the official proclamation of Kosovo's army is in the progress.