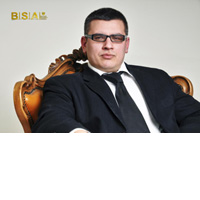 Aleksandar Đelošević is Head of Balkan Security Agenda, neutral regional platform and strategic thinking on Defence and Security. He is an experienced professional in International Security, Author of several notice analysis on terrorism threat in Europe, and Co-author of First Vocabulary of Europian Security in Balkan region. His research interests focus on Geopolitics, Southeast-European politics and Balkan Security.

A regular commentary on strategic affairs on South East Europe

"One day the great European War will come out of some damned foolish thing in the Balkans (1888)."
— Otto von Bismarck

Strategic Balkan is, first of all, a Balkan that develops a realistic view of its potential and limitations.
It need the courage and openes to think about themselves, Europe, and future in more realistic terms. Balkan countries need stability and cohesion at home if they want to be strong abroad. Also, Balkan should be rich if it wants to be matter in the Europe. Finaly, Balkans need to develop a limited but ambitious agenda for its external affairs. The key to this, and for security as well, will be understanding, and the ability to make tough policy choices.The ability to understand global interests, smart diplomacy to reduce the risks of conflict and overcome misunderstandings towards regional cooperation will depend on future developments in the Balkan Peninsula. The Balkans is a geopolitical center of the zone. In the past 20 years a lot has been done to eliminate the destabilizing surpluses of weapons of all kinds created in a decade of conflict in Southeast Europe. There have also been very important processes to create trust among the countries in the regions that military policies do not represent any threat to neighbours. The progress has been a remarkable and quite inspiring example of cooperation in a very sensitive security environment.Balkan will not become one country again, but it has realised that its strength lays in becoming a more united region, and eventually more united in Europe. This blog, will contribute to the clarification of key events for the better understanding of the situation on the ground in the region of Southeast Europe.