Military and Security aspect of the Kosovo crisis Part II

No country can act wisely simultaneously in every part of the globe at every moment of time. Henry A. Kissinger

The biggest struggle that will need to be done is to keep KSF story within NATO to stop it become Kosovo Army. In the current situation, potential Kosovo army, can not be compared to the capacity and strength of the Army of Serbia, which is perhaps the strongest in the region and capable of defending the country from a much larger threat. Albania as first neighbour, dont has a large military facility through which could significantly raise the capacity of the Kosovo army, if formed, but as a NATO member, through a variety of programs in the Alliance can do much to help Kosovo. Kosovo army would, if formed have the most support in Albania, which will probably give some surplus weapons in Kosovo, and Kosovo, though having no air force, soon will receive helicopters. Albania has no combat aircraft, but rapidly developing air forces helicopter component. Albania, a NATO member, and as such, the contract Alliances, may be invited to respond if the authorities in Kosovo provoke confrontations with neighbors such as Serbia, Montenegro and Macedonia. In addition to the fact that there is cooperation between Kosovo and Albania go and reports that Tirana has recently given way to Pristina port Shengjini on the Adriatic Sea to a new "independent state", so she had access to the sea. But it is a fact that Kosovo army would have as many powers, as it allowed NATO and KFOR. 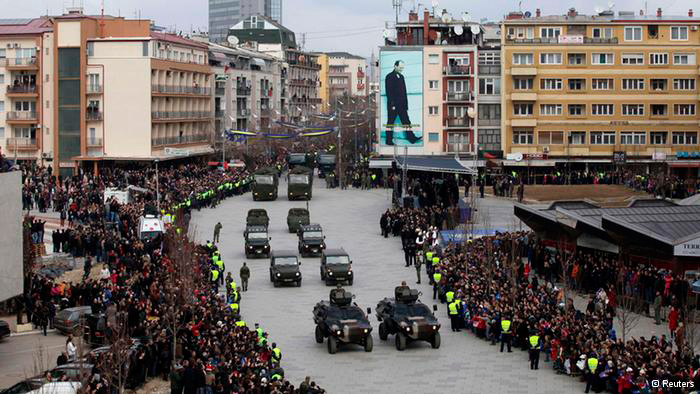 During these days we are witnessing the Albanian coordinated activities inside the Macedonian Parliament, then their protest in front of the UN building during the speach of Montenegro President Milo Djukanovic and increased activity of Kosovo officials to prevent voter from northern Kosovo Serbs to vote on November 3rd Elections. Following the unification of Kosovo, the scenario is clear. First will be raise the issue of Western Macedonia, and then the rest of the Balkans with an Albanian population.

In addition to the current territory of Albania Shiptar great country, it is planed to enter Kosovo and Metohija, Presevo valley in southern Serbia (Presevo, Bujanovac, part Medvedje), the western part of Macedonia, Southern and eastern parts of Ulcinj in Montenegro and parts of the municipalities of Plav and Rožaje and Southern Greek Epirus, with the Greeks who for a long time play on card of assimilation of ethnic Albanian minority.

"Great Albania" may not exist formally, but legal and practical function yes, since the border between Kosovo and Albania as it does not exist, and between Kosovo and Macedonia is more imaginary than real. A major role in the creation of a "Greater Albania" have Turkey. Recently Ankara official said that Bosnia and Herzegovina is a domestic political issue of official Ankara, and that Balkans were stable while they're here, managed. Turkey again has clear imperial ambitions on the Balkans.

The distribution maps in terms of security, sphere of influence in the region is given to Germany under the auspices of the United States, namely Kosovo diplomacy itself was created under the direct hand of German diplomacy. United States because of the organized crime at home  that had a origin from Balkan area by Albanian groups do not want to directly support the option of creating a Greater Albania. By the FBI relevant data, Ethnic Albanians affiliated themselves with the established LCN families in New York, acting as low-level participants. As their communities and presence have become more established, they have expanded to lead and control their own organizations. Organized crime figures maintain ties back to the Balkan region and have established close-knit communities in many cities across the US nation. Albanian organized crime activities in the U.S. include gambling, money laundering, drug trafficking, human smuggling, extortion, violent witness intimidation, robbery, attempted murder, and murder and they have recently expanded into more sophisticated crimes including real estate fraud. In the case of unification threshold to organized crime rose sharply and therefore that within the U.S. On the other hand, the dominant leaders in Kosovo believe that the very independence of Kosovo is realy a compromise in the direction of creating a Greater Albania. The so-called state of Kosovo declared its independence, but with the condition that there is no right of union with another state.

There is almost no doubt that the military agreement, in Prizren, between KSF commander Agim Ceku and Albanian Defence Minister Arben Imami, a small step in the creation of a Greater Albania. However, the agreement between Pristina and Tirana Kosovo is primarily for propaganda significance because it is the point to show that Kosovo may enter into such agreements. The Word "agreement" is very interesting because it was signed by one member of the NATO pseudo-state which is not a member of the UN, and with Albania as a member of NATO, the alliance "is actually signed an agreement with Kosovo." The agreement contains procedures for entry and exit, as well as temporary and status of members of the Armed Forces of the Republic of Albania and the members of the so-called Kosovo security forces in the territory of another Party. The other option, that Kosovo forces are present in Albania, is not something that particularly worried, but the first option is certainly something to think about and take a stand. It should be reminded, that Albania, at a time when there was not a NATO member, has a bilateral agreement on military cooperation with Turkey, a NATO member, is very similar to this most recent between Tirana and Pristina. According to the Albanian-Turkish agreement also provided for each room of the fighting force in others. However, it is symptomatic that the pattern of earlier ethnic Albanian-Turkish military deal now mapped to contract Prishtina-Tirana.

Pandora's Box in the Balkans is preparing to reopen and it could happen again 2016.