In the following a programmatic article by the more Putinbiased Russia expert and Gazprom consultant for the EU Prof. Alexander Rahr, in which he propagates an eco-alliance between Russia and the EU. After that my assessment.

The ever-growing ecological movement in Germany, supported by broad sections of the country's population, has supplanted the newly emerging peace movement and completely marginalized the new left-wing social justice movement "getting up". The Germans are more interested in saving the planet from global warming than in disarmament. People in Germany are over-sensitized to green issues, and the atomic threat of war, which has never been so great as it is today, does not give anyone the necessary importance here. 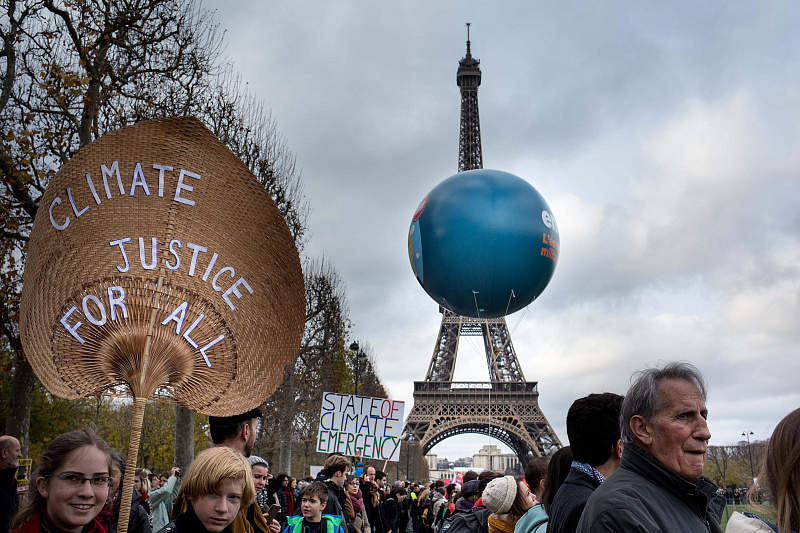 Protesters gather near the Eiffel Tower in Paris, France during the 2015 UN Climate Conference. (Clement Martin/Sipa USA via Associated Press)

Germany and the EU do not seem to grasp the seriousness of the situation when power politics dominate international relations and disarmament agreements collapse. Politicians are driven by the demands of the Fridays-for-future mass demonstrations. Protests, or political discussions about the question of a nuclear-free world - which seems much more urgent than climate policy - do not exist. Should it come to the stationing of new nuclear missiles worldwide, the threshold to nuclear war sinks in a frightening way.

Germany and the EU need to wake up. The old East-West conflict is history, the confrontation NATO / EU versus Russia - secondary. Europe is on the verge of a global US-Chinese confrontation that may lead to a second Cold War with all the ensuing consequences.

The European continent must consolidate again. A common approach EU-Russia is without alternative. Both sides need an overarching theme, a common external threat that unites the continent on a new, contemporary level. If peace policy does not unite the sides, then there can only be one global ecological agenda.

Russia and the EU must organize a summit, where they quickly agree on environmental and climate change measures in the sense of a green alliance. Here, the EU and Russia can shuffle their geopolitical ambitions and controversial value conflict, focusing on the truly important goals that move Europe.

What is forgotten in the current German eco-debate is that Germany alone can not reach the Paris climate targets. German foreign policy must separate itself from its normative values. Instead, other major powers, notably Russia, must be won for a global environmental alliance.

Russia, the largest country in the world, is crucial to global climate rescue. Here reforestation measures can help to reduce the CO2 content in the atmosphere. Germany and Russia can jointly produce hydrogen (from natural gas). Russia urgently needs modern waste disposal facilities from Germany. Russia has the largest freshwater reservoir in Europe - a commodity that is gaining importance in the green economy.

If you get closer to ecological issues, make important commitments, regain confidence, and decide on a road map, today's current conflicts will disappear from the agenda.

Which political party in Germany will be the first to adopt these proposals?

As it stands, the next German government will become a black-green coalition. Weber (CSU / EPP) has even described this as a model for the future. The Greens see themselves not only as an environmental party but also as value-orientated party (Wertepartei).To counter this, Putin would have to make some concessions to the repression of the opposition and the LGBTIQ movement, as well as to comply with the Minsk agreement The Green Party will then put aside its concerns about ecological cooperation with Russia.

It will be important to make clear to the Greens that the Siberian forests destroyed by China, such as the Amazon, are the green lungs of Eurasia and of humanity. But preventing further deforestation and reforestation are not the only fields of a possible cooperation. Sasha Rahr still names properly water managmement, hydrooxide technology, technology for the management of waste and rubbish as concrete examples of a coperation. And .-for sure- there are certainly other fields of cooperation. Within the EU, especially Poland will act against such cooperation, especially as a US puppet as Great Britain before the Brexit was the Trojan horse of the USA (De Gaulle)..

But Poland is in danger of isolating itself as a “coal state” and a disruptor to a humanitarian project for menkind within the EU. Poland will also try to bring the values orientation of the Greens against Russia into play but is in the glasshouse because of its own authoritarian PiS government.If PiS-Poland tries to veto any EU-Russian ecological cooperation and wants to play the anti-Russian bully, then a coalition of the willing inside the EU will be the alternative and will have an overwhelmingly majority within the EU.

The fact that Russia has now joined the Paris Climate Agreement at the UN summit in New York makes such cooperation much easier. An important step in the right direction thanks to Putin.

However, Putin sees the Siberian forest as similar to Bolsanaro the Amazon as a matter of national sovereignty. Bolsanaro refused to call the Amazon the green lung of humanity. Similarly, Putin does not want supranational institutions such as the UN or the EU to intervene in Russia's national sovereignty and determine its forests. This must be kept in mind by every NGO and every EU-Russian eco-alliance and both sides have to create cooperative solutions with incentives that are acceptable to Putin. But Putin, for his part, has now documented, by Russia's accession to the Paris Climate Agreement, that he is different on that point from Trump and Bolsanaro, and more ready for pragmatic compromises. Conversely, every eco-alliance with Russia has to make sure that results are achieved and Putin does not stick to non-committal announcements in order to be able to hang himself a propaganda green cloakor that he uses the EU as "useful idiots" (Lenin) The deeds should be measured this way.

An environmental alliance between the EU and Russia, as a confidence-building measure, could also become the entry into a more comprehensive New East Policy (Neue Ostpolitik), defining Ukraine and Belarus as neutral bridging states between the EAEC and the EU, and advocating a mutual disarmament initiative within NATO, as well for a renewal of an economic and ecological modernization partnership.