Arguments for a MIX of Industrial Ordnungspolitik and Market Elements. What About Skolkovo?

Yuri Koffner in his RIAC article “Back to the future: German industrial Ordnungspolitik” wants to give Germans advice how to become a hi-tech nation comparable to the USA and China. What he proposes is also Back to the future, the old neoliberal program former German governments had executed for almost 2-3 decades without any success. Tax reductions, let the market decide, niche policy, not much state intervention, venture capital, etc. The point is that this neoliberal ideas didn’t work from the 90s to the 2020s to create real new hi-tech industries in Germany which could match US or Chinese standards. The recipe of their success is a mix of neoliberal policy elements AND state intervention. The internet and the IT technology including Silicon Valley didn’t only start because of some ingenious individuals in a garage only, but also due to the fact that the Pentagon and the state-sponsored military industrial complex wanted a decentralized communication and control infrastructure in case of a war. And when Germany and Europe made industrial Ordnungspolitik which we just call industry policy Germany and Europe had the AIRBUS and other projects which challenged the US monopoly of Boeing and other industries. Even the nuclear industry in Germany was largely possible because of industry policy and state intervention. And the so called cheap nuclear electricity had state subsidies as incentive and also support for the whole infrastructure and this technology had also the potential to build nuclear weapons which Franz Josef Strauss and Adenauer wanted to get till the Nonproliferation treaty stopped them from doing so and they complained that this would be a “new Versailles.” Juri Koffner also claims that climate change would not be man-made, ignores it as a real problem for mankind and that all this renewable energies and energy turnaround would be nonsense and misleading for Germany’s and the EU’s h itech future development. Here speaks Mr. Resource Empire! But Putin has signed the Paris Climate Accord and is also not following Koffner’s advice when developing Russia’s new high-tech industries. 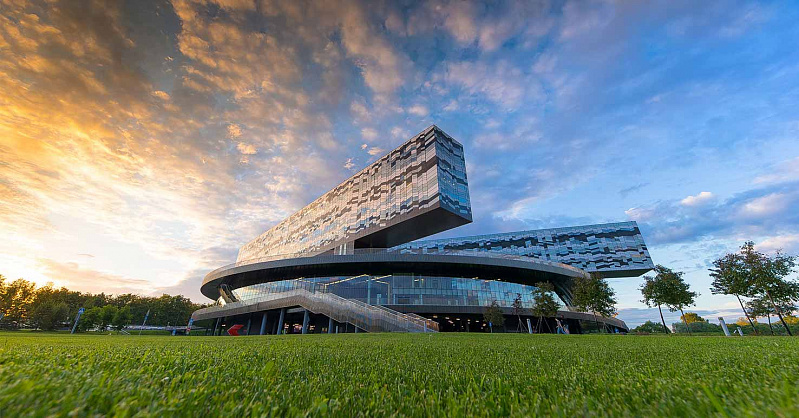 The owner of the German newspaper Münchner Merkur Dirk Ippen like Yuri Koffner spoke out against active industrial (Ordungs) policy in his keynote. The economy would know better what is profitable and sustainable, the state is the worse entrepreneur, industrial policy is obsolete, indeed the work of the devil. Greetings from the old neoliberalism, which wants to leave everything to the companies, but wonders why Europe is getting more and more technological problems. Dirk Ippen gives some good arguments against Altmaier's industrial policy but forgets the new environment in which today's Western and German industry operates. His approach to the market may still have worked at a time when there were no Asian state-controlled economic giants such as China, South Korea and Japan that pursue active industrial policy, which is largely their recipe for success - from the shipping industry to solar cells and New Silk Road and basis of the Asian economic miracle Be it the South Korean chaebols, the Japanese MITI and its keiretsu, the Chinese companies that will receive billions in funding under Made in China 2025. Mr Ippen should also remember his own conservative role model, Franz Josef Strauss, who made AIRBUS a successful competitor to Boeing through active European industrial policy. It should also not be forgotten that many innovations in the USA also make their success with the help of the military-industrial complex such as the Internet. Friedrich List should also be mentioned with his educational tariffs, who provided for the protection of new industries through tariffs until they are competitive.

Ippen and Koffner also forgets that not only the state, but also business enterprises can make wrong decisions, such as VW, for example, which is completely one-sided on electric cars, while Toyota on hybrids, the chief of the German Technical museum Professor Heckel on hydrogen technology and others on fuel cells and the entire infrastructure from power plants to charging stations and battery technology will not exist for the foreseeable future, so he should reconsider his argument. On the other hand, his arguments regarding state research policy and the scientific community make sense again. Neoliberals consider industrial policy to be state capitalism, see even supporters of the market economy as Franz Josef Strauss as state capitalists and also ask what should have changed earlier so that one can legitimize industrial policy today.

The answer: The state capitalist system of China has not yet existed in this form as a competitor to the West and China relies fully on active industrial policy and state control. The most prominent examples of this are the Made in China 2025, which aims to make China a world leader in the high-tech area of ​​artificial intelligence, blockchain technology and quantum computers within a short period of time, as well as the New Silk Road, a global project of the century. It is therefore appropriate if the German federal government has now launched a program for AI, in my opinion there should be an EU high-tech fund that will make up for the technological deficit of the Europeans compared to the USA and China. You can also see this in the field of quantum computers. The entire EU spends just 1 billion euros on this revolutionary and disruptive technology in a decade - a drop in the ocean for 28 countries. Also, Europe has so far not been able to produce its own Google, Facebook or similar large companies, just as it is not even able to develop its own drone, but has to procure it from the USA and Israel. Franz Josef Strauss would have seen it differently. Industrial policy also serves to promote strategic new industries so that one does not get into strategic dependencies. A new study by the Pentagon “Assessing and Strengthening the Manufacturing and Defense Industrial Base and Supply Chain Resiliency of the United States” aims to ensure a rapid transformation to a war economy in order to make the United States fit for war in a longer Sino-American war.

Especially as China and the USA are preparing for a “protected war” (Xi Jinping) state intervention and industry policy will be strengthened.

In short: State intervention and industrial policy will be intensified on the part of the USA and China. Therefore, Europe cannot actually afford the luxury not to react to these changing framework conditions and prolong its neoliberal agenda.

The question is not whether to do industrial policy, but what kind and for what projects. To rely entirely on e-cars like Volkswagen shows that entrepreneurs can also be prone to wrong decisions. The state can do that too, and it is just as likely that this mistake is also made, but so can private industry, which is why one should not see failed projects as an argument per se against industrial policy and the state does not only need to focus on one priority project, but on a diversified one Set industrial policy with several priority projects, especially since other basic research and framework conditions are also promoted. In short: It depends on a healthy mix between state and private research and development, but one should not put this into fundamentalist opposition and question one of the two sides. I would like to make one more important argument: Strategic industrial policy also requires strategic thinking politicians or technocrats and educated engineers like the CCP leadership who do not chase after the next technological fashions ,but who are fairly interested, technologically and economically adept.

A Dobrindt, who was both Minister for Transport and Digital and didn't even know what a quantum computer was, a Dorothee Bär as responsible politician for digitalization and Dobrindts successor Scheuer, who are more concerned with e-games conventions and e-scooters and air taxis as new industries of the future, in order to attract nerds and PlayStation addicted young people and not discussing quantum computers, AI, blockchain technology, synthetic fuels, etc., would have been more of a shame for FJ Strauss . And whether Altmeier, who first states in his industrial policy strategy that you first have to get a technological overview what technologies Germany and Europe has and thus document his and the political caste's extensive ignorance, or a Christian Lindnerwho like Juri Koffner rejects industrial Ordnungs policy per se and only wants to hand everything over to the free market, seem more like the recipe for failure. There has to be a mix between industrial Ordungs policy and new market elements as venture capital.

The EU has now at least decided on a new Green Deal as “Apollo project” (President of the EU Commission Urusla von der Leyen), but it is questionable whether the EU budget and the ECB-funded grants and loans have a uniform thrust in the direction of new technologies and analog and digital infrastructure construction and not to fill any financial holes in the state budgets. Long story short message.: A European hi-tech investment fund or some sort of industrial policy would be needed that promotes new high-tech technologies and brings them to a breakthrough so that the technological gap between Europe and the United States and China can be closed.

A European investment fund that promotes new industries and start-ups, as well as existing national champions nationally and European, but as a new EU Manhattan and Apollo project. A kind of Apollo project from cloud computing, quantum computing, AI, blockchain technology, robotics to nano and biotechnology and also such new developments in Silicon Valley as artificial meat. New ecological technologies would have to be also addressed, which can already be part of the current New Green Deal of the EU. Trillions of savings are in the bank accounts with zero interest rate policy and are not invested in productive new technologies, but are continuously decreasing. Bringing this dead, unproductive capital to a productive utilization is the idea of Walter Kohl in his book “Which future do we want?”(Welche Zukunft wollen wir?).

A European Silk Road Marco Polo 2.0 would be needed, a project that in addition to the systematic development of a high-tech industry in research. Development and production also remove the investment backlog in the analog and digital infrastructure in Europe, which are also prerequisites for the use of these new technologies, leaving the young generation with a well-functioning infrastructure for the future as the legacy of our generation, a common interest project that unites today’s Europe, a vision and concrete material advantages, as well as jobs and economic growth then generated in a multiplier effect. However, Juri Koffner and the Russians should more care about their own technological gap and underdeveloped hi tech industry. A former German diplomat who worked for the German embassy in Moscow for a long time wrote, “I was able to visit the dreamed-up innovation center near Moscow Skolkovo in 2016 and was quite disappointed. In any case, the project has nothing to do with Silicon Valley, but rather reminded me of the research campus at RWTH Aachen University or the Max Planck Institute in Geltow near Berlin or the HU campus Berlin-Adlershorst. Not bad, but certainly not earth-shattering.”

OTHER RECORDS
The Technological Revolution in China and the USA: What About Europe and Eurasia?
Ralf Ostner
RECP, START and Germany´s Indo-Pacific Strategy
Ralf Ostner
Biden-Victory: After the Election is Before the Election
Ralf Ostner
Tags
EU, High-tech, Ordnungspolitik, Skolkovo