Annegret Kramp-Karrenbauer and her revolutionary foreign policy objectives for Germany

On the one side he portraying AKK as the brute force of German neomilitarism, on the other side he wants to have a neutral Germany-at best without weapons and independent from the USA. Both are not acceptable as a neutral Germany couldn´t be in an equal position with highly militarized and armed Russia on its own and on the other side he is criticizing AKK for its neomilitarism which could give Germany the position to become neutral and independent from the USA and Russia. 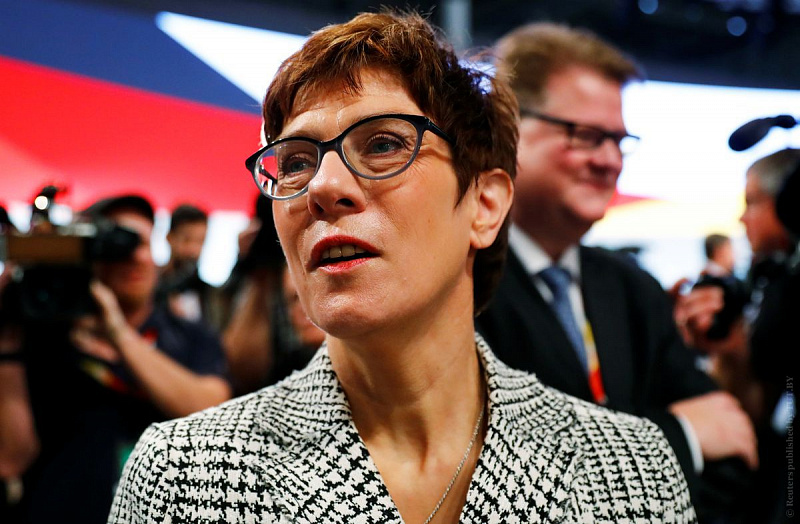 We don´t know exactly what Putin-Russia wants: A German NATO exit and militarily weak Germany it can control or take over, a highly militarized Germany which will ally against the USA and the West together with Russia, maybe China or some sort of Eurasia. However the German party for this would be the AfD, but it would also not be sure if a rearmed AfD-Germany would automatically team up with Russia or unite with the Trump-USA. But all this is more theoretical talk, let´s look at the facts.

The article claims that Germany would make a U-Turn and become some sort of neofascist and neomilitarist country under AKK. First: the Germaný army is so underfinanced that you need some sort of reconstruction. Secondly: That Germany hast o play a more important military role in the future struggle for a new world order is also undisputed, but there is still a lot of opposition to it from the Green Party, the Social democrats or the Left Party. On the one side, it is good that AKK is pronouncing this hardcore approach, on the other side one has really to keep in mind what the capacities oft he Germans and ist military could be.

First Germany is a country that is prohibited to have arms of mass destruction, nuclear, chemical or biological weapons, air crat carriers and so on. Secondly, the budget for such a rearmament program is limited and will have many opponents. Third, AKK is not automatically the next chancellor in Germany but disputed in their own party. Fourth it is a question of capacities. The German army is not prepared to establish a security zone in Northern Syria, could only send two little vessels and maybe 1 submarine to the Indo-Pacific. Germany nowadays is not the Germany of Wilhelm 2 or Adolf Hitler, a Wehrmacht able to fight at all fronts, with a military culture like under Hindenburg and Ludendorff, when the Prussian military-controlled large parts oft he society. Today you don´t even have a joint staff of chiefs, an integrated military command or charismatic military leaders which could influence German politics or society. Germany conversely is dominated by post-war pacifism questioning the military and even each of its operations. The German army is a parliamentarian army and its generals and officers are not know t the German public or youth as that has been in former times.

The German army is now not a conscript army anymore, but a voluntary army. And its role is also not clear: Defense of ist own or NATO territory in Europa or out- of area operations like in Afghanistan or Mali. AKK cannot find even support for a robust mandate fort the German army in Mali. Therefore the U-turn is not the revival of German militarism, but the strengthening and normal reconstruction of underfinanced structures oft the German military. No German politician with the exception of the right-winged AfD wants to see a revival of German militarism. It is necessary that the underfinanced German military is strengthened, but this doesn´t make Germany a new military power, especially compared with the USA, China, Russia, France, Britain or other militaries. Even when the Germans play the vanguard troops of NATO in the Baltic this doesn´t mean that they will be that powerful that they could start a war without the USA. At best they are a supplementing power, but not a power on its own or a major force. Germany even doesn´t want to get out of NATO or to replace NATO by a European military.

Germany is a mostly militarily castrated country that tries to want to get some reputation. Germany has not the capacity nor the political will or the will of its partner that it could develop in Germany before WW1 or WW2. Same with Japan in Asia. Germany and Japan became the losers of the last world war and are so restricted in their military capacities that they won´t become a new military power that could seriously challenge Russia or the USA. Germany tries now to get more positions within NATO and on the second track push a European pillar within NATO, but Germany won´t ever become a leading military power.

Manfred Weber, the former candidate oft he European conservatives (EVP) is now propagating a European cybercommand as the first step to a European army, but this is also empty talk as the German military has just 150 cyber command officers and compared to US, Russian or Chinese standards this is nothing, even f you team up with other European forces. Instead of trying to push a ridiculous fake militarisation with big talk about the German army to be sent in security zones in Syria or the Indo-Pacific. Germany should more concentrate on diplomacy and to try a New East Policy with Russia. Of course, Russia will only make a compromise, it feels that it cannot split NATO or the West, but on the other side, Russia won´t be impressed by a fake German neomilitarism which speaks out loud, but has no hard power and is mostly empty talk.

A former German diplomat summarizes the so called U-turn of AKK towards allegedly neomilitarism as follows:

“ Of course, there can be no talk of neo-militarism etc.

AKK’s initiatives seem to suggest something different, namely that a politician without previous knowledge and experience listens to an ambitious adviser (Nico Lange), who was once a professional soldier, but also has no profound expertise and resilient networks.

In other words: not neomilitarism, but the activist, poorly advised and foreseeable doomed attempt to profile yourself as a security politician and future candidate for chancellor. „