Erdogan’s Neo-Ottoman Empire in the making-what does the West want?

Print
Erdogan advances in establishing his Neo-Ottoman Empire. The list is long: after supporting the Muslim Brothers everywhere in the Greater Middle East, equipping Islamist homicide militias from Syria to Libya, he becomes partly responsible for these civil wars and refugee flows, now portrays himself hypocritically as saviors of refugees and human rights, and is silencing the EU through the refugee deal, which he now wants to expand to Libya. After establishing a military base in Sudan, now marching into northern Syria and moving Turkish troops to Libya and also seeing his claims to gas deposits in the Mediterranean and the latter as his Mare Nostrum, building a second Bosporus channel, refusing NATO ships to pass through the Bosporus to the Black Sea, procuring S 400 rockets from Russia despite all NATO protests, as well as Russian nuclear power plants and, with Putin, sees itself as a new regulatory force in the MENA region, he is now reaching out to Pakistan and Central Asia. 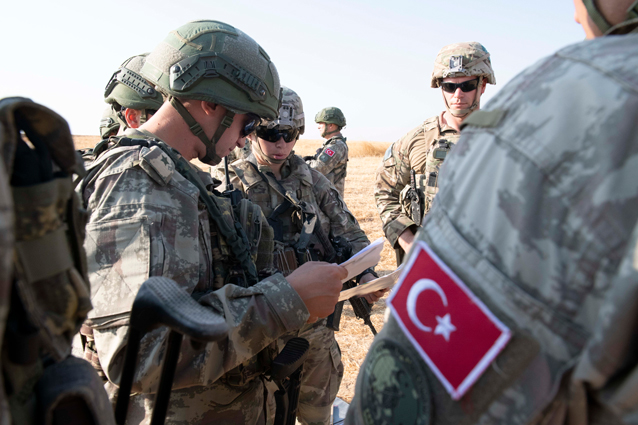 The U.S. has resumed talks with the Taliban, and the Indian Secretary of State is outraged that the Financial Action Task Force took off Pakistan from the terrorist financing list when it met in Paris. The Western states think Pakistan could help to find peace in Afghanistan and influence the outcome of a postwar order through Pakistan´s alleged influence on the Taliban. Interesting article in this context:

https://www.middleeastmonitor.com/20200131-turkey-pakistan-plan-landmark-deal-for-dual-nationality/ Erdogan is now approaching Pakistan. Dual citizenship, military cooperation and the supply of attack helicopters are being discussed. I am currently working on CENTO, the Middle East NATO that existed under the leadership of the UK and the USA from 1955 to 1979, which included Turkey, Iraq, Iran and Pakistan, which was also sometimes referred to as the Middle East Treaty Organization (METO) and Baghdad Pact. Turkey also planned a military alliance with central Asian Turkic states in 1992, but Uzbekistan refused to do so because of the fear of Turkey having too much influence in Central Asia, and the question remains in the future as to whether such military alliances would be conceivable again given the new constellations, SCO and neo-Ottoman ambitions.

“A military alliance must serve a purpose. At first, NATO stood for it

What would that be at TUR / PAK?

I think a coalition of the willing is conceivable. ”

Especially since Pakistan is also interesting for Turkey and Saudi Arabia because of its nuclear weapons, both may also want to buy themselves and they are also expanding their nuclear industry as well as Egypt. This should be even more on the agenda if Iran wants to develop nuclear weapons after the ruptured nuclear deal with the United States and if Trump tacitly accepts North Korea as a nuclear power. Erdogan certainly thinks about the option of a nuclear-armed Neo-Ottoman Empire, which would make him independent of the United States and Russia.

Some experts are asking whether Turkey will one day become a member of the SCO and whether it will also be integrated into China’s new Silk Road. However, that also depends on the extent to which Erdogan would forego neo-Ottoman ambitions within Central Asia and the SCO or whether he would not also stir up the Central Asian Muslim brothers and Uyghurs against the secular Central Asian authoritarian rulers supported by Russia and China and not in cooperation with them but in confrontation with China and Russia. And China and Russia are also seeing how troublemaker Erdogan behaves in western alliances like NATO. Questionable as to whether they want to have more troublemakers in the SCO, as now also hostile Pakistan and India are now full members.

Turkey´s rapprochement to Pakistan now also creates Iranian dreams of a coalition between Iran, Turkey, Pakistan, Russia and China. If this is realistic or born out of Iranian desperation about the US sanctions remains the question:

“An Iranian envoy has proposed a new bloc of five countries — Turkey, Pakistan, Iran, Russia and China — to boost cooperation and resolve issues in the region.

“Countries like Iran, Pakistan, Turkey, Russia and China have the potential to form a new alliance for better future of the region,” Iran’s Ambassador to Pakistan Seyyed Mohammad Ali Hosseini said in a lecture at the Islamabad Strategic Studies Institute (ISSI) on Tuesday.

In view of cooperation among important regional countries, Hosseini said, Economic Cooperation Organization (ECO) — a political and economic intergovernmental organization of Iran, Pakistan, and Turkey — can play its role in the economic development.

“ECO provides an appropriate opportunity for Iran-Pakistan to coordinate their policies in line with economic growth and render necessary ground to facilitate economic activities and encourage investment and trade and remove transit hurdles between the two countries,” he added.

The Iranian envoy said Pakistan, as an Islamic and neighboring country, attains special place in the foreign policy of Iran.

“Iran and Pakistan have participated in most of OIC [Organization of Islamic Cooperation] conferences. Unfortunately, due to role of some countries, this organization has not been effective in addressing issues of the Islamic Ummah and taking positions in the support of Islamic cause,” he said, without naming the countries.

Talking about Pakistan’s Gwadar and Iran’s Chabahar Ports, the ambassador said the two ports complement each other.

“Establishment of rail network between Gwadar and Chabahar and its link up to Europe and Central Asia through Iran, will usher major economic development in the region. On the other hand, construction of Railway track on Pakistani territory to China, linking the two ports will lead towards economic development in this region,” Hosseini concluded." https://www.aa.com.tr/en/middle-east/iranian-envoy-proposes-new-alliance-of-5-countries/1724935

Should this become a reality, the New Silk Road in China would develop rapidly and in some cases the Asianization of Asia predicted by Parag Khanna in his book "The Future is Asian"would materialize, perhaps even an Islamization of Asia.

Some experts believe that the EU is only a visitor to the developments in the Greater Middle East. The question is whether that is positive or negative. After the US imperial overstretch as a result of the Iraq war, after the strategic overexpansion of the EU and NATO in the east, Russia and Turkey are now expanding in the Greater Middle East, but it remains to be seen whether both will also suffer imperial overstretch, especially since when you look at Erdogan’s ambitious neo-Ottoman dreams. The EU and NATO could first need a breather, which they could use for consolidation and reorientation.

But it seems that Western goverments and liberals have not learned their lesson. They want Assad been toppled and then a democratic, peaceful Syria would emerge. The new hope is an internal power struggle within the Assad family, especially by his cousin. The Guardian writes:

"Leading the cast is the Syrian leader Bashar Al Assad, and Syria’s first lady, Asma al-Assad, but star billing has so far been taken by the president’s first cousin, Rami Makhlouf, who last week took to Facebook to do the unthinkable: air the normally inscrutable family’s dirty laundry.

Makhlouf, Syria’s most powerful tycoon and its richest man throughout Assad’s reign, complained that his cousin was sending secret police to seize his assets and shutter his businesses. In doing so, he laid bare a power struggle that now threatens the very existence of the Syrian regime, sparking a fissure in the ruling Alawite sect, and leaving regular Syrians aghast.

Without a hint of irony, Makhlouf boasted of bankrolling Syria’s infamous security forces, who have tortured and disappeared thousands of people in nine years of war, then complained that his employees had been treated in “an inhumane way”

Only some questions: Does the West and its supporters really think that the ousting of Assad would bring a more pluralistic and secular-democratic Syria? Aren´t the secular-democratic forces like the former Free Syrian Army, the Southern Front not marginalized to the point that you only can choose between a secular dictatorship or an Islamist dictatorship? Would his cousin be for democracy? Could he have control over the Baath party and their warlords?Would he even have the power to toplle Assad? Would he built a democratic Syria by elections and integrate all the Islamist parties and militias? The Carnegie Foundation thinks that the cousin cannot seize power as Assad controlls the militray and the security, while his cousin and his firends are running the economy. The anaylxis thinks that Assad´s powerstrugglke with his oiligrach cousin and the Caesar santction Act oft he USA will bring the Assad regime tot he brink of econmic collapse and will cause capital flow to other countires.But what hast the West to gain from this? Would a power struggle within the Assad family not restart the Syrian civil war as the Islamist militias and the Muslim Brotherhood would now see a chance to seize power? Would Russia support the cousin if he guarantees them their military bases in Tartus and Lakthkia? Could he do this? Would Assad´s cousin not just oppress the opposition as much as Assad did? Is he a democrat or just wants to replace his cousin as a leader? Couldn´t the result be that a weakend Baath party and the weak Assad cousin or Assad would become an easy victim for Islamists and the Muslim Brotherhood? Wouldn´t Erdogan-Turkey use this opportunity to get rid of the cousin with the Islamist murder militias and the Muslim Brotherhood and expand his own neo-Ottomanian empire as he is already doing in Libya?

In Libya Erdogan is sending troops who openly engage in the war, while the Russians retreat as General Haftar failed with his offensive on Tripolis and the Erdogan-backed forces are going in the offensive. General Haftar threatened to attack Turkish troops, but at that time Putin decided to withdraw his inofficial Wagner mercenary troop in order not to get in a direct confrontation with Erdogan-Turkey and be drawn in an imperial overstretch quagmire. The West is so stupid that he just wants to see Assad toppled and the Russians out of Syria. They seem to ignore that the Islamists and the Muslim Brotherhood and Erdogan-Turkey will be the winners and not a secular- democratic new government. Or is it the new policy of the West to promote Islamist and NATOpartner Erdogan´s neoOttoman empire? However, if a power struggle emerges in the Assad family, Russia could also face big problems in Syria. Russian strategist Karaganov´s idea of Russia of a global supplier of international security would after Libya have its next limits. The West has toppled now all secular despots from Mubarak,Ben Ali, Saddam Hussein to Ghaddafi instead of fighting the Muslim Brothers and Islamists. The anti-IS front was the only exception. But it looks like the West wants to repeat its pattern to topple a secular despot like Assad in order to get the Muslimbrotehrhodod or other Islmaists in power and to support the expansion of Erdogan´s neo-Ottoman empire. Tha question remains: Is this Western policy done by purpose or does the West exist anymore or will be the neo Ottoman Empire unintended result of its prolonged regime-change policy against Russia and Assad and Haftar? And can Russia define psjeres of interests with Erdogan in Libya and Syria if Assad´s and Haftars rule are in decline?

OTHER RECORDS
Why I as a liberal democrat support EU-Russian cooperation
Ralf Ostner
NATO and China: How to Respond to the New “Potential Threat“?
Ralf Ostner
EU-Russian ecological cooperation needed despite and because of the Covid crisis
Ralf Ostner
Tags
Turkey, USA, Security, Russia, Middle East