The Russian state corporation ROSATOM has played a leading role building new nuclear power plants around the world. ROSATOM owns 67% of the world’s nuclear power plants currently under construction. ROSATOM also provides a significant portion of energy in Russia itself with 18.7% of the total electrical production inside the country. ROSATOM has built and operates 33 nuclear power plants in 12 countries around the world. It owns a total portfolio of $300 billion of orders for the continued construction of nuclear powers plants. ROSATOM’s most commonly used export for nuclear power worldwide are the VVER-1200 series reactors. VVER is the Russian abbreviation for water-water energetic reactors. These are pressurized water reactors with generation III + designs. This means the reactors incorporate the latest technologies for operational reactors and can contain passive safety features to prevent reactor meltdowns. Reactor safety has been an important issue in light of the 2011 Fukushima Daiichi nuclear disaster in Japan. ROSATOM has several ongoing construction projects providing VVER reactors in countries like India, Iran, Turkey, and China. With the completion and operation of these reactors, carbon emissions are expected to decrease worldwide. This can help end the environmental crisis of global warming which is linked to carbon emissions. 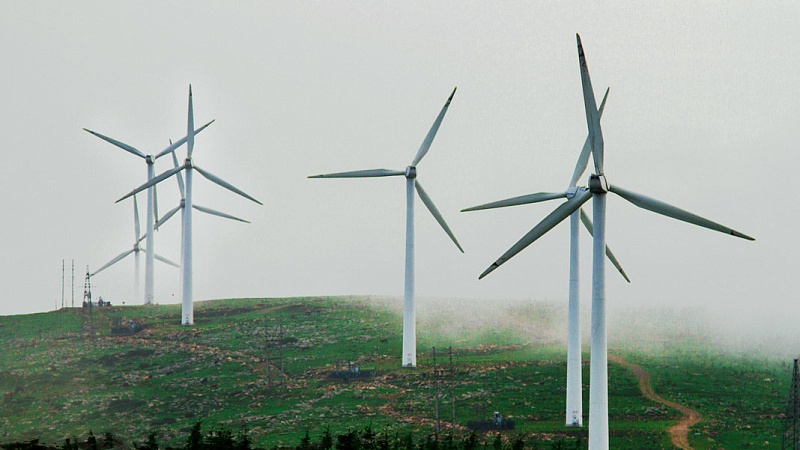 Russia and India have just negotiated an agreement known as the Action Plan for Prioritization and Implementation of Cooperation Areas in the Nuclear Field. According to this agreement ROSATOM will construct six Russian designed nuclear reactors in India. These new reactors will use VVER generation “3+” technology. The site of these newly designed units is located in Kudankulam, India. After the completion of these initial reactors, construction can begin at a future site that will continue to utilize the local Indian population as part of India’s “Make in India” policy initiative. “Make in India” is government sanctioned program started in 2014 that encourages foreign companies to invest in manufacturing centers inside of India. With foreign companies operating within India, they are able to employ the local population and utilize the infrastructure in the area bringing in more capital into the region. According to the World Bank’s “Doing Business Report” (DBR) India has jumped 23 places from 100 in 2017 to 77 in 2019 regarding companies’ abilities to conduct business within India. This jump is attributed to the Indian government’s policy on easing restrictions on foreign companies applying for licenses to manufacture inside the country. ROSATOM’s nuclear program in India is just one example of the success of “Make in India” policy helping to improve India’s standing in the World Bank’s annual “Doing Business Report.”

Russia remains actively involved in construction of nuclear power plants inside Iran. The Russian company ROSATOM has already completed the first reactor in Bushehr, Iran and it has become operational by 2011. The second and third units are expected to be operating by 2024 and 2026 respectively. These new nuclear reactors, known as VVER-1000 units will utilize Generation III+ technology. The president of Iran’s Atomic Energy Organization, Ali Akbar Salehi believes that with the completion of the second and third units, this will save Iran 22 million barrels of oil and prevent the release of 14 million tons of pollutants. The United States and other leading Western powers like Great Britain and Germany have reached an agreement with Iran, allowing it to pursue a nuclear energy program for peaceful purposes. This agreement known as Joint Comprehensive Plan of Action (JCPOA), has also received support from Russia and China. According to this agreement, economic sanctions would not be imposed against Iran while it pursues a nuclear energy program with the understanding that Iran would limit its uranium enrichment capabilities. Highly enriched uranium is a necessary component in constructing a nuclear weapon.

However, U.S. President Donald Trump has decided to pull the U.S. out of the JCPOA agreement and reinstitute economic sanctions against Iran. By May 2019 Iranian President Hassan Rouhani has warned that Iran would begin enriching uranium beyond the limits imposed by JCPOA in response to the new U.S. sanctions. If Iran enriches uranium beyond the limits of JCPOA then they could potentially develop nuclear weapons. A nuclear armed Iran can pose a significant threat to states like Israel and Saudi Arabia, creating unrest in the Middle East, and destabilize the region.

In an international conference in Vienna July 7, 2019, Russian diplomat Mikhail Ulyanov said that Russia remains committed in ensuring Iran keeps its uranium enrichment levels below 5%. Iran still relies on Russian involvement in its nuclear program and Russia remains a key partner in the JCPOA program that the U.S. had been a signatory to. There is still the possibility that Russia and the West can reign in Iran’s ability to develop nuclear weapons, but the U.S. would need to remain a part of the JCPOA agreement and refrain from imposing sanctions against Iran.

ROSATOM has also invested heavily in the construction of Turkey’s first nuclear power plant, the Akkuyu power plant. Turkish President Tayyip Erdogan noted that the Turkish economy has grown an average of 5.8% from 2003 to 2017 and with a growing population, energy demands will increase. In addition, President Erdogan hopes Turkey will decrease its dependence on imported energy. In the long run, it is Erdogan’s dream that Turkey will eventually be one of the top ten richest countries in the world. The Akkuyu power plant will utilize 4 units producing a combined total of 4800 MWe of power, costing a total of $20 billion. The first unit will be operational by 2023 and the remaining three should be completed by 2025. With all four units operational, the Akkuyu power plant will provide 10% of Turkey’s energy needs. Russia uses the “Build, Own, Operate,” BOO initiative with the construction of Turkey’s first nuclear power plant in Akkuyu. This allows Russia to finance and operate the Akkuyu power plant and Turkey will pay back for the financing and construction of the power plant over a period of at least 15 years. Success of the BOO program will allow ROSATOM to continue constructing nuclear power plants in other developing countries interested in pursuing nuclear energy.

Pollution remains the most important health concern in China today. According to a New York Times article in 2007, cancer was already the leading cause of death in China and it was directly linked to air pollution caused by carbon emissions. In fact, despite hopes global carbon emissions had already peaked because of the increasing use of renewable energy sources, by 2017 world-wide carbon emissions continued to rise. This rise in global carbon emissions was linked to China’s reliance on coal burning for growing energy needs. This rise in coal energy is attributed to China’s growing industrial production and a decrease in energy from hydro-electrical plants because of ongoing droughts in the region. By early 2013 smog levels around Beijing were 30 times higher than what is considered acceptable by the World Health Organization (WHO) and traces of this smog were detected as far away as California.

A solution to this ongoing health crisis is that China will decrease its dependence on fossil fuels such as coal and substitute it with other energy sources. China’s National Development and Reform Commission, also known as the NDRC, has implemented new policies to increase China’s reliance on nuclear energy. By Oct. 2018, the NDRC’s goal is for China to increase its dependence on nuclear energy from the current 4% to 28% by the year 2050 in hopes of decreasing the global temperature rise to less than 1.5 degrees Celsius. China’s long-term goal is to decrease carbon emissions which leads to global warming and pose a significant health risk for the population.

In order to decrease carbon emissions China had plans to build various types of new reactors. Some of the reactors planned for operation included the AP1000 designed by the U.S. company Westinghouse. AP1000 is a Generation III pressurized water reactor that utilizes passive nuclear safety. Passive nuclear safety measures are important in the field of nuclear energy especially in the wake of the Fukushima Daichi nuclear disaster in 2011. In that disaster a massive earthquake and tsunami knocked out the primary and backup systems designed to keep the nuclear reactors from suffering a core meltdown. When the primary and backup systems went offline this led to a reactor core meltdown causing an explosion which released dangerously high levels of radiation throughout the area. Since then, passive systems have become critically important in designing future nuclear reactors.

China’s strategic goal of increasing its dependence on nuclear energy hinged on the delivery of the U.S. designed AP1000 reactors. However, the future projects involving AP1000 reactors are at risk because the U.S. company Westinghouse has recently declared bankruptcy. The bankruptcy means China may not receive the AP1000 reactors and would need a suitable substitute to replace them.

China has several options to replace the AP1000 like the Hualong-1 and the advanced CANDU reactor. The Hualong One is a Chinese nationally designed reactor based on previous French designs incorporating a 3-cooling loop. However, the Hualong One’s main purpose is for export. One Hualong-1 reactor is already destined for Pakistan’s Karachi Coastal Power Station. The advanced CANDU reactors are Canadian designed reactors considered critical in reducing greenhouse gases like carbon emissions. In 2017, Canada and China signed an agreement for the construction of 2 advanced CANDU designed reactors that will operate 100 km southwest of Shanghai. The advantages of using advanced CANDU reactors are that they use natural uranium and would not be needed to convert into enriched uranium. These reactors also use regular light water for coolant making the design cheaper than traditional pressurized water reactors. However, these reactors are fairly new have not been thoroughly tested at normal operational capacities. As of now, China only plans on utilizing 2 reactors of this design.

The final alternative is ROSATOM’s VVER-1200 units for China’s burgeoning nuclear industry. Based on an agreement between Russia and China signed in June 2018, ROSATOM will build two VVER-1200 reactors at China’s Tianwan plant with two additional VVER-1200 reactors in Xudabao, China. The final two reactors are slated for completion no later than 2028. ROSATOM has the advantage in exporting nuclear reactors in China since its competitors like Westinghouse are bankrupt and advanced CANDU reactors are new technologies that have not been thoroughly tested in an operational capacity. VVER designs are already proven technologies that have existed for decades with proven track records of safety. It should be worth noting though, China wants to invest in newer generation 4 reactors for the future such as fast breeder reactors and molten salt reactors. If ROSATOM intends to stay competitive in China’s energy market in the foreseeable future than it would be worthwhile to invest in these new types of reactors.

Countries like China will continue to invest in renewable energy sources like solar energy and wind power, but global energy demand will continue to rise in the future. With growing environmental concerns over carbon emissions, nuclear energy will remain a viable option as an alternative source of energy in lowering carbon emissions. ROSATOM CEO Alexey Likhachev says, “Nuclear energy makes an ideal basic energy, ensuring a constant supply at a predictable price.”