A recent address by senior State Department official Daniel Rosenblum signaled a shift in the direction of American policy in Central Asia, reflecting some critical economic, political and security developments in the area. The June 9th speech comes after an unprecedented five-country tour of Central Asia-- Kazakhstan, Kyrgyzstan, Tajikistan, Turkmenistan, and Uzbekistan-- by Secretary of State Kerry last November.

In the same address to the House Foreign Affairs Committee last year, Rosenblum detailed the usual multifold approach to Central Asia— the promotion of state sovereignty, security, economic development, political reforms, and human rights. This year’s speech indicated a marked change, outlining “two, fundamental long-term national security interests” in Central Asia: one, the independence of sovereign states in the post-Soviet space, and two, the stability and security of the region, i.e. the prevention “of violence and the emergence of conditions that could result in states becoming havens for terrorist groups hostile to the United States.” Calls for increased human rights and political reforms were less pronounced this year. Maintaining the states’ independent sovereignty and countering terrorism, “[disrupting] and [destroying] the finance and recruitment efforts of Da’esh [ISIS] and other international terrorist groups” have been pushed to the forefront of US Central Asian policy.

Details about Central Asian fighters in ISIS are somewhat limited, but experts agree that their numbers have grown significantly in the last year. The Soufan Group estimated that 2,000 citizens from Kazakhstan, Kyrgyzstan, Tajikistan, Turkmenistan, and Uzbekistan have joined ISIS as of December 2015, while the Russian Federal Security Service’s (FSB) estimate is around 3,000. Reports from individual states’ governments show even higher numbers. 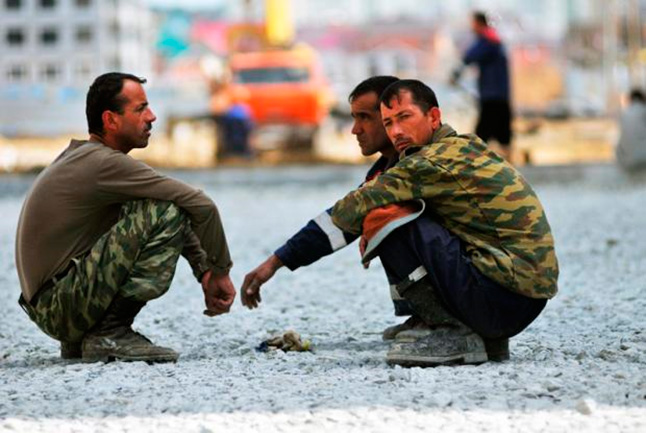 Photo of Central Asian Construction Workers in Russia from www.dandc.eu.

The majority of Central Asian ISIS fighters are migrant workers recruited in Russia, where huge numbers of Central Asians find work due to the paucity of employment opportunities at home. The remittances they send home make up a substantial portion of their countries’ economies. In 2013, personal remittances made up 50 percent of Tajikistan’s GDP, and in Kyrgyzstan, 30 percent. But with Russia’s economic recession and the ruble’s decline, the value of remittances sent home has plummeted; in Tajikistan, for example, by 65 percent in US dollar terms last year. It is now also more difficult for Central Asians to work in Russia, in light of a recent hike in prices of monthly work licenses and the institution of expensive procedures and tests, like a Russian history and language test. Hundreds of thousands of migrant workers from Central Asia have even been banned from Russia, apparently from fear of ISIS foreign fighters returning en masse. Thousands of Central Asians, most of them young and male, are now returning home. This, coupled with a strapped economy, could create instability.

In addition, Turkmenistan, Uzbekistan, and Tajikistan, which share a border with volatile Afghanistan, face some risk of Islamic violence spilling over as Western troops continue to pull out of the war-torn country. According to some sources, the number of deadly incidents over the poorly guarded Afghanistan-Tajikistan border has become increasingly frequent. Russia has promised to help secure the border against any incursions and to increase troop numbers from 6,000 to 9,000 by 2020. The Central Asian states are unlikely to be able to defend themselves against an assault on their own.

Central Asian governments have responded to the threat of ISIS recruitment aggressively, which, to the frustration of their citizens, has largely taken the form of religious repression and curtailment of civil rights. As part of their anti-radicalization campaigns, states have suppressed anti-regime religion-based groups, thus eliminating some peaceful political outlets and alternatives to violent radicalism. As Western scholars and Central Asians citizens have noted alike, these policies are more likely to be counterproductive than not.

Taken together, these factors may render Central Asia more vulnerable than ever to ISIS penetration, a prospect reflected in Rosenblum’s speech. Here is a breakdown of the professed goals of this year’s speech, with some comparisons to those of the speech last year, in each of the five Central Asian countries: 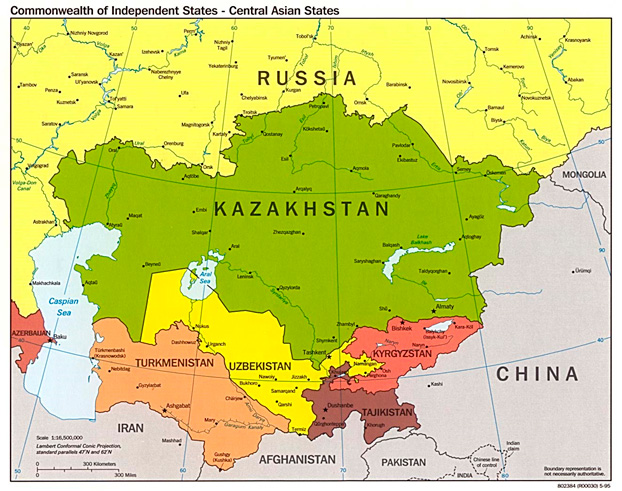 Commonwealth of Independence States – Central Asian States from the Perry-Castaneda Map Collection from the University of Texas Libraries.

Kazakhstan – The budget request of $8.8 million reflects a 5 percent increase from 2015. This year's speech emphasized Kazakhstan as the most advanced economy of the region and also its potential for further regional integration, economic development, investment, and partnership with the United States. Last year, it criticized Kazakhstan’s counterterrorism policies that limited religious freedom and peaceful political activity, while this year, they were not mentioned.

Kyrgyzstan – The budget request of $51.8 million reflects a 39 percent increase from 2015. Again, as in the speech last year, emphasis was on helping build Kyrgyzstan’s nascent democracy and improving governance. This year, there was a stressed importance on helping Kyrgyzstan diversify its economy in order to reduce reliance on the remittances of migrant workers, which is indirectly related to countering ISIS and violent extremism.

Tajikistan – The budget request of $41.6 million reflects a 44 percent increase from 2015. Last year, the speech emphasized enhancing Tajikistan’s military for better regional security, especially along its lengthy and mountainous border with Afghanistan. This year, the focus was on the economic stresses of falling remittances and consequent social tensions, and the necessity of building employment opportunities within the country, “where [Tajiks] are less vulnerable to recruitment and radicalization by violent extremists.” Human rights protection, while mentioned, was emphasized less strongly than last year.

Turkmenistan – The budget request of $4.8 million reflects a 43 percent increase from 2015. As he did last year, Rosenblum focused this year on security and infrastructure development around its border with Afghanistan. This year there was also a greater focus on educational programs to develop Turkmenistan’s human resources and diversify its economy. Rosenblum acknowledged the restriction of fundamental freedoms in Turkmenistan again this year.

Uzbekistan – The budget request of $11.6 million reflects a 9 percent increase from 2015. Again, as in last year's speech, he emphasized Uzbekistan’s position as the geographical center of the region and thus integral to regional security and economic connectivity. Last year, the speech focused extensively on human rights— improving prison conditions and labor rights, and eliminating the dependence on forced labor. This year, emphasis was on economic independence and resilience, and making Uzbekistan an important partner in “combating criminal networks and terrorist groups.” Stressed also was maintaining stability and sovereign independence.

Besides the marked focus on counterterrorism and regional security, a comparison of the speeches from this year and last year also reveals a greater attention to promoting sovereign independence and positive relations with the US, reflecting growing fears of Russia trying to re-establish a sphere of influence in the post-Soviet space. This year, Rosenblum requested funding to help professionalize and improve the production of media content as well as increased funding to support the consumption of alternative news sources in order to counter Russia's soft power influence in the region, where many still speak Russian and are familiar with Russian culture. Russia retains a powerful influence on both print and electronic media, and the most popular social media websites are Russian. Rosenblum also mentioned China’s economic and infrastructural ambitions in the region, i.e. its massive Eurasian integration initiative known as One Belt, One Road. Evidently, Central Asia has become an important arena of international interest.

Perhaps in no other region in the world is the promise of greater economic connectivity, growth, and prosperity as well matched by its potential for regional instability and insecurity. As Rosenblum noted, Central Asia, celebrating its first quarter-century of independence this year, is currently undergoing a momentous shift in its trajectory. The US, among other world powers, is now seeking a greater role in influencing that trajectory.