In the minds of many the sports diplomacy and sports marketing that support competitive athletic tournaments like the FIFA World Cup and the Olympic Games deserve a Nobel peace prize.

But recent events in Brazil indicate that the model could use a “reset” to remain relevant to future generations. RT, Pravda, and Facebook (which is backed by important Russian investors), have provided social platforms that have emboldened Brazil’s young and restless in their opposition to the sports model. 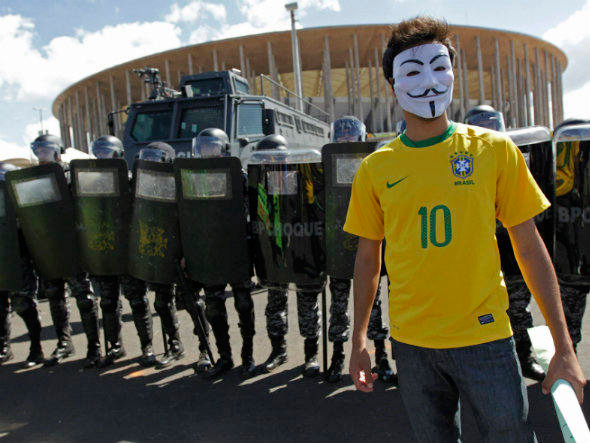 The demonstrations have featured placards, speeches and popular blogs and social networking sites in Portugese and in English, which is the first language of FIFA, the international governing body of association football and many international businesses. One London-based blogger who called for “a conversation about Brazil” included among the references on her LinkedIn profile, Alistair Campbell, the controversial media adviser to former Prime Minister Tony Blair who engineered Britain’s participation in the $3 trillion dollar Iraq war.

As a result of popular blogging, an influential minority in Brazil has mobilized a groundswell of popular opinion that is questioning the role played by sports as a force in the social restructuring that is unfolding in a fragile multipolar world.

How and Why Did This Happen?

It’s all about the economics, income distribution and social inclusion that cause Brazil to have growing pains as it’s multicultural model comes of age.

As the world’s 6th largest economy Brazil seemed to be doing all the right things. The official blog of the International Monetary Fund has predicted Brazil will pull ahead of France to become the world 5th largest economy in 2015.

The International Olympic Committee voted in October 2009 to make Rio the host city for the 2016 Summer Olympic Games, rejecting bids the from Spain and the United States. Rio is the first city in South America to host the Olympic Summer games.

Although many Americans were unhappy that Brazil earned the “first world” status to be awarded major sports competitions U.S. president Barack Obama acknowledged the value of sports diplomacy and did a publicity photo modeling a jersey of Rio football team Flamengo during his 2011 visit to Brazil and promised to return for the FIFA World Cup.

Relatively immune from the global crisis that developed in 2008 Brazil, coincidentally, began to experience a slowdown in growth a few months after the Obama visit. Experts and government officials cited structural problems caused by the ongoing global crisis and the so-called “currency wars,” which were exacerbated by Washington’s policy of “quantitative easing” administered by the Federal Reserve Bank.

The consumer sector of the economy remained stable thanks to government tax breaks on household items and some utilities, and television, newspaper and magazine advertising campaigns featuring sports marketing as a key component. Football legend Pele and millionaire stars like Robinho, Ronaldinho and Neymar are important influencers of consumer purchasing habits.

Many young males in Brazil would be happy to grow up and become the next Neymar. Few have aspirations to become the next Sergey Brin, whose emigrated to the United States from the former Soviet Union and grew up to be a co-founder of Google.

Social Confusion Trumps Social Inclusion- Middle Income vs Middle ClassBut inflation pushed up the cost of basic food items and public transportation sparking a classic revolution of rising expectations particularly among those who view education as their ticket to middle income status in Brazil.

It should be noted this status is not to be confused with traditional interpretations of “middle class” or bourgoisie, including Marxian constructs. Even Brazil’s government confuses the terms “middle income” and “middle class.”

Many economists and academic observers refer to this confusion as “the middle income trap” and you can Google the term on the internet for free access to how various institutions and experts define it nearly any language you want.

For example, at a November 2012 press event the Minister of the Secretariat of Strategic Affairs, Wellington Moreira Franco, said increased participation of “the middle class” in the economy is essential for Brazil’s growth and development.

According to the Brazilian government report “Voices of The Middle Class,” 52 percent of the total population of the country is considered “middle class”, with per capita income ranging from R$ 291.00 to R$ 1,019.00 per month. In relationship to the U.S. dollar at that time, when $1.00 was buying 2.07 reals, the Brazil “middle class” stretched from $140 per month to $492 per month.

Brazil’s income stability program, similar to the “dole” in Britain, is 660 reals per month for those who qualify, the equivalent of $318 per month by the November 2012 exchange rate.

Due in large part to inflation the current dollar to real rate is $1 buying 2.25 reals. The minimum wage in the United States state of Massachusetts, which has a large population of legal and non-documented Brazilian immigrants, is $8 per hour or 2,880 reals for a 160 hour work month at current exchange rates, far above the Brazilian “middle class” (or middle income) distinction.

With Bloomberg reporting consumers paying annual credit card interest rates as high as 323 last year the ability to pay for private education that is necessary to enter the job market, buy the high value added products like digital cameras, cell phones, mens sundries and other items romoted by athletes became limited, making sports marketing and FIFA, which is closely associated with it, a target for a cash strapped younger generation.

Marketplace volatility made 2012 a very interesting year for sponsorship. “A scenario full of contradictions,” according to James Andrews, a senior vice president of Chicago, Illinois company IEG, which follows world licensing arrangements between major companies and FIFA, The Olympic Movement and others.

Reuters and others report that the statistics developed on inflation by the Brazilian Institute of Geography and Statistics (IBGE) send a mixed message. On a 12-month basis through mid-June the inflation tracker known as ICPA-15 is above the government target at 6.67 percent . But the June monthly inflation is listed at just 0.38 percent, in alignment with some government analysts and financial markets experts. Food price inflation, for now, has slowed.

The Dilma government has had conversations with demonstrators and those who claim to lead various factions of what has been described as a leaderless “anonymous” movement.

But it is political season in Brazil and with Dilma running for reelection as the Workers Party candidate next year anything can happen. The FIFA World Cup will go off in the middle of Brazil’s presidential campaign and a BRICS summit is scheduled to take place in Brazilia during the same time frame.

After Dilma praised the demonstrators for helping to create a new era of transparency, she met with her cabinet and proposed a public discussion and referendum on government reform. Meanwhile, the Brazilian media is sending signals that the government seeks to stretch out the process over time to avoid further social conflict that could disturb financial markets and the excellent credit rating Brazil holds with major international rating agencies. Unlike France, which has a history and clear legal pathway to create a 6th Republic, Brazil has neither. It is uncharted water.

Pope Francis visits the World Catholic Youth Festival in Rio in a few weeks and the Dilma government has guaranteed his security. In an uncharacteristic move, ABIN, the Brazilian intelligence agency famous for its copycat version of the CIA “kids” cartoon website designed to generate recruits, used the internet to share its role in providing institutional security to the nation. ABIN coordinates with government agencies in around 80 nations to reduce the risk of disruptive events at sports venues and events like the visit of Pope Francis.

The modern Olympic Movement and have successfully used competitive sports to prepare emerging generations for military service and wars, create role models, and to energize popular support for job creation through international trade. Brazil is a poignant reminder that the consequences of using soft power techniques to create social reform can generate a hard power response to insure institutional security and economic stability. Looking at the “Arab Spring” and the pre-Olympics riots outside London in 2011, and now Brazil and Turkey, the world and the media need to come to grips with that political reality.