Proliferation And The Psychopathology of Prohibition

While praised as a triumph of contemporary diplomacy the United Nations regime to stop the spread of weapons of mass destruction (nuclear, chemical, biological) seems to have enabled every nation that wants a WMD capability to obtain the technology to become a threat, or in the case of terrorists and other non-state actors, to employ proxy governments who engage in WMD commerce to use it as a bargaining chip for other objectives.

In spite of four Nobel Peace Prizes (Bunche, Arafat, Rabin, Peres), one of the big drivers of terrorism continues to be the destruction of the State of Israel.

Libya and Palestine are cases where opportunistic leaders have helped drive that issue. While Washington spent around $3 trillion on its decade long war in Iraq the four decade presence of Moammar Gaddafi and Yassir Arafat on the world scene has probably caused the same amount of expenditure and loss of human life in efforts to stamp out terrorism.

Libya possessed a 10mw research reactor a year after Col. Gaddafy and his clique of young officers took power in 1969. It was installed by Soviet experts. The government of King Idris signed the Nuclear Non-Proliferation Treaty in 1968. Idris came increasingly under the economic influence of Occidental Petroleum, who signed an oil exploration deal with Libya in 1965. The multinational oil giant was controlled by American industrialist Armand Hammer, whose family ties to the Kremlin date back to the October revolution. The current outgoing chairman of Oxy Pete is of Palestinian heritage.

Gaddafy's regime ratified the NPT but worked around it.  The quality of Libyan scientists capable of developing an explosive device was problematic. Ghaddafy shifted his stratregy to supporting terrorism and operations directed at Israel and its friends, including smuggling of nuclear technology. His regime subsequently shifted to providing havens for Islamist terror groups, causing more killing and more defense spending to counter it.

Gaddafy’s Libyan “socialist revolution” preceeded the Islamic revolution in Iran by a decade. While both were driven by the theopolitics of Islam and by oil politics Great Britain, Soviet Russia and the United States all helped make Gaddafi a poster boy at the intersection of terrorism and weapons of mass destruction.

Even after Libya relinquished its WMD arsenal in 2003 Gaddafi remained an iconic figure in the world of Islam, continuing to hold extreme views on the Israel question. His regime continued to empower terrorists. His social media “brand equity” rivaling the Ayatollah Khomeni, Usama bin Laden and Yasser Arafat until the time of his death and in some circles still does. 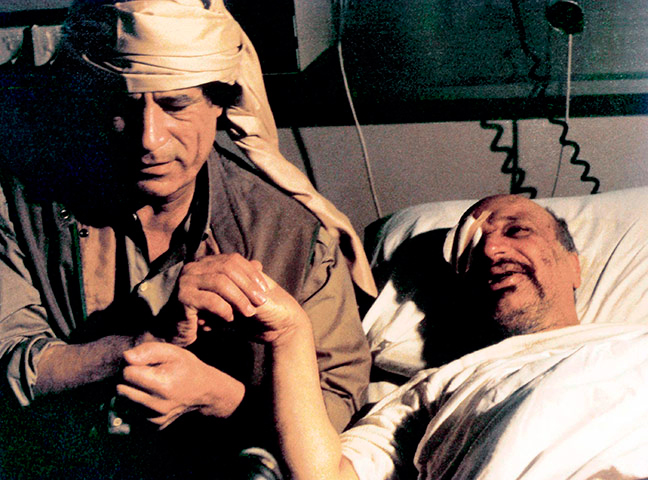 Nobel Laureate Arafat “the non-communist” and his East German Connection

While seen as a non-communist alternative to Dr. George Habbash, Arafat’s connections and motives are as convoluted as Gaddafy’s.

A year after West German chancellor Willy Brandt won the Nobel Peace Prize for his Ostpolitik, designed to bring the democracies of western Europe and the socialist nations of eastern Europe together Arafat met with leaders of the German Democratic Republic in East Berlin.  In 1972 the first terrorist attacks were made on U.S. military bases in West Germany the Baader-Meinhof gang and the Red Brigades. A Palestinian terror group calling itself Black September conducted a dramatic attack on the Munich Olympic Village.

Willy Brandt would be hung by his own petard when in 1973, the government of West Germany, somehow, was informed that his top aide, Guenther Guillaume, was an agent of the Stasi, East Germany’s security service. Brandt resigned as chancellor in 1974.  Guillaume was jailed for a few years and traded back to East Germany, where he became an author and national hero. None of this stopped West Germany from being a center for terrorist attacks, kidnappings and murders of prominent businessmen.

A former two star general in the Romanian intelligence organization Securitate, Mihai Pacepa, has said that in order for Arafat to seem “more Palestinian” the Cold War-era KGB had invented a background legend for Arafat with a birthplace in Jerusalem. Pacepa defected to the US in 1978.  Romanian president Nicolai Ceaucescu put a bounty of $2 million for the death of Pacepa. The former head of Romanian intelligence also claims that both Arafat and Ghaddafy put up bounties of $1 million each for his death. 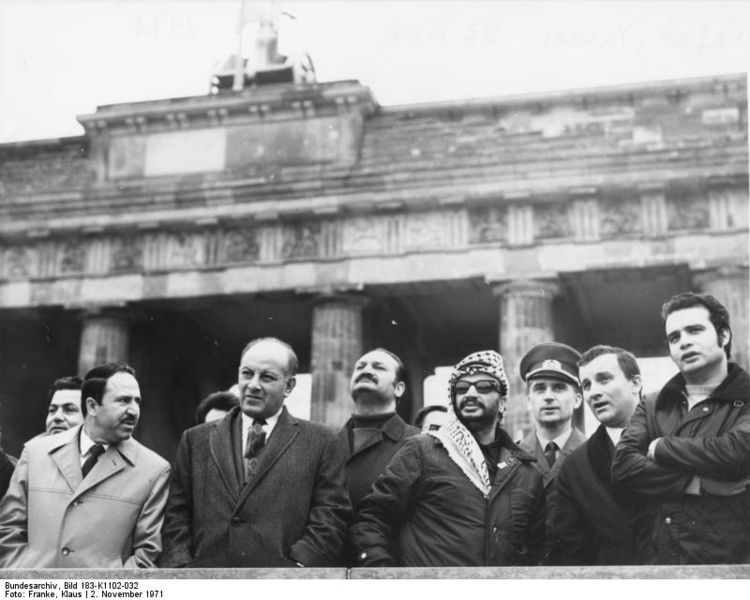 For a variety of reasons that would distract from the current trend in positive diplomacy in the Syria situation the background for those bounties are not discussion points in this small blog post.  Pacepa did fall into the trap of other high level defectors who use their notoriety and hyperbole to write voluminously about the same sort of conspiracies and operations that they ran away from and play it back to “the other side.”

French biographers Jihan El-Tahri and Christophe Boltanski claim in their 1997 work The Seven Lives of Yassir Arafat (Les sept vies de Yasser Arafat) that a birth document indicates he was born in Cairo, Egypt in 1927, where he spent his early childhood and attended university.  His father was a Palestinian textile merchant.

Both the PLO and Libya provided arms and some training to the Provisional IRA, among other groups.

Avoiding Back To The Future… Action Not Theoretical Analysis

The Putin-Medvedev era marks the first time a sizable group of Russian youth have had the opportunity to study abroad in the United States and Great Britain at major universities and become sensitized to arms control, soft power and the concept of nuclear non-proliferation. Universities in Russia are teaching and examining diplomacy with broader international perspectives.

Unfortunately, some conservative interests in the United States continue to push the old Cold War propaganda line that this form of educational exchange is merely a ruse to place intelligence operators. Using the academic world instead of Facebook. Likewise in Russia, some in what the same conservative US media like to call “the Slivki faction,” suggest the same thing.

One thing is for certain. There is limited work left for arms control and non-proliferation industries. Predictive analytics and electronic intelligence gathering make it easier to spot potential problems without the huge coterie of government employees, and contractors. NGOs and foundations who depend on government leaks and open secrets, whose experts have drawn lucrative salaries, are now no different than industries that need to downsize. Absent of political will, there will never be another UN supported economic sanctions action like the one placed on Iran.  Soft power advocates are buzzing up hopeful discussions that may lift it.

As for missiles, drones and other objects that can carry some form of WMD payload, there is the Missile Technology Control Regime, a voluntary regime which has about as many holes in it as Swiss cheese.

Witnessed by events, the political reality indicates that terrorism is the new weapon of mass destruction, and that peacekeeping is becoming the new war.

That’s all I’ve got to tell everybody today. Thanks for reading. Feel free to comment and look for another Institutions and Competition blog post in a couple of weeks.