A groundswell of popular articles and academic monographs are appearing that discuss nuclear guided missile warfare, modernizing delivery platforms, warheads and sophisticated guidance systems. On the power curve one sees a major realignment of diplomatic relationships among major powers that seek to control threats but provide opportunities for new situations to develop.  Refugees and fundamentalist agitators have become pawns in the game.

The trend is reinforced by news and expert analysis about the development of nuclear weapons and guided missile delivery systems among emerging nations, including threats posed by the so called “rogue states,” and the dual use technologies that are alleged to sometimes mask those efforts.

Little is being said, however, about the straw that stirs the drink, namely, the uranium itself, which has its own dual use beyond weapons, namely, powering commercial reactors that generate electricity for the global nuclear power industry.

During a time when defense industries everywhere are dealing with tough budget cuts the big money in the uranium economy is made by adding value to the basic product. Major powers are competing to control the political reliability of uranium producing nations, particularly those who also offer hydrocarbon potential.

In the security and intelligence communities, including those who generally oppose each other, there is a common, unwritten rule that the best security is quiet, silent. You don’t see it, feel it or hear it. This view was confirmed recently by Sergey Ivanov, chief of staff for Russian Federation president Vladimir Putin, responding to questions from the international online media platform “RT.”

France is an example and it is using nuclear diplomacy to increase its global footprint. France derives around 87 percent of its electricity from nuclear generated power. You don’t hear much about it.

Uranium- a retro cold war diplomacy with a post-colonial hangover

According to uranium and nuclear industry trade publications, the spot price in today’s sluggish market for one pound of milled uranium hexafluoride U308, sometimes called “yellow cake” is $35.75.  Three pounds of this milled and processed uranium product is currently worth $107.25, slightly more than a barrel of Brent Crude oil, which is currently selling in the $102 range.

This “yellow cake” was made famous by U.S. secretary of state Colin Powell and British prime minister Tony Blair in their effort to talk up the nuclear threat that would sell the president George Bush $3 trillion Iraq war. The “yellow cake” in question was alleged to have come from Niger, which has a historic contractual relationship with the French state owned uranium mining and processing industry. Some American media outlets, including Time magazine, dismissed the claim at the onset as being false. The consequences of the $3 trillion war continue impact the world economic order, particularly the fossil fuel sector.

Uranium mining is a small industry with a club-like tradition.  Commercial uranium mining began during the 1890s at Johannestal, in the Austro-Hungarian empire (today part of Czech Republic).

Ironically, the “yellowcake” that was processed into weapons grade uranium and used in the two nuclear devices that were dropped on Hiroshima and Nagasaki by the orders of United States president Harry S. Truman (who was told nothing about America’s nuclear program until the death of U.S. president Franklin D. Roosevelt) was mined in the Belgian Congo, once the private property of King Leopold of Belgium.

Today the ex-colony known as the Democratic Republic of the Congo continues as major venue for the mining of uranium through a contractual relationship with the French state-owned company Areva.

World annual production of U3O8 for now is growing but the market is considered “slow.” As a result spot uranium prices do not impact the broad energy market like spot oil prices do. But the market remains a target of opportunity for “pump and dump” specialists, and for speculators and arbitragers seeking to control, or otherwise stockpile inventory.

Last year, according to the World Nuclear Organization just 68,864 tons of U308 were produced, meeting 86% of world demand for nuclear power generation. According to the WNO around 63 percent of the world-wide production of uranium comes from mines located in Kazakhstan, Canada and Australia.

Even with French president Francoise Hollande sitting at 18 percent popularity in the polls France has conducted interventions in its former colonies;  the Central African Republic, Mali and Niger all of which contain uranium deposits.

China has become the new player in the club and its presence is being felt along Africa’s Uranium Road, the meridian that stretches from the Western Sahara to Sudan, where most of Africa’s major uranium producers are located. Sudan has been a long been a nation that has looked askance at unregulated uranium deals. Namibia and South Africa are also important producers but operate in a different sphere of geopolitical influence.

France Washington and the Soros factor

Uranium-rich Niger, a longtime client of France, has become the latest target of speculator-philanthropist George Soros.

Niger is the world’s fifth largest producer of U3O8. But its current production is three fold less than newcomer Kazakhstan.

Through a contractual arrangement with Areva “yellow cake” from Niger is underselling top producer Kazakhstan by a big margin, which could be considered dumping by the World Trade Organization. But the uranium club doesn’t play by WTO “dumping” rules.

According to nuclear and mining trade publications Russian energy giant Gazprom and around twenty other international firms, including German operators, are active in mining or holding stakes to mine uranium in Niger. But the dominant organization is Areva.

Areva revenue last year was reported at around $13 billion, but business journals say the state run company has been struggling as of late.

Mahamadou Issoufou, the president of Niger, is a former Areva administrator. He has surprised the French government by seeking to renegotiate the long term mining contract with Areva in order to obtain funding to implement social and educational programs for the cash-strapped nation.

Negotiations have reached an impasse.  If Areva agrees to an upward increase in the price of uranium in the current ten year contract all companies involved in mining and as stakeholders would face pressure to comply.

In this context the Voice of America reported on Febuary 18th  that Niger is hosting exercises and talks organized under the ageis of the United States and other major powers that includes several Uranium Road nations with the goal of responding to terrorist and energy concerns. The report tallys the total number of troops, including US units and cadre at around 1,000.  The New York Times reported last year that the United States has set up a drone base in Niger.

Algeria “The Russia to Europe’s South.”

Algeria is the largest country in Africa, roughly 3.5 times the size of the U.S. state of Texas. Yet friends of George Soros, notably the European Council on Foreign Relations, have had the hubris to call Algeria “the Russia to Europe’s South.”

Do you see Russia using loaded language like “the messianic billionaire” employed by Soros biographer Michael T. Kauffman, a former New York Times foreign correspondent and winner of the coveted George Polk Award?  You can visit the Amazon online site and buy the Kauffman biography of Soros for as little as $0.01.  Yes, just a penny.

Another Soros funded organization, the International Crisis Group (ICG), has advocated the inclusion of Al Qaeda in the government of Algeria to help “democratize” the nation. In December Algerian military sources revealed to western media that a high level Al Qaeda leader was killed along with other cadre in a helicopter attack on his vehicle as it travelled across the southern desert.

Citing terrorist concerns emanating from uranium and gold producer Mali, the government of Algeria last November closed its southern border and increased its military presence throughout its remote southern desert regions. Senior government officials speaking to the media described the move as a “sovereign decision.”

Niger shares common borders with Algeria and Mali. It sits just below Libya and to the east of Mali.

Algeria has been experiencing problems in the refugee camps controlled by the Polisario Front and located in its remote southeastern Tindouf region. Some news reports claim the camps, which contain upwards of 95,000 refugees, serve as a recruitment area for fundamentalists with connections to Al Qaeda.

In a development related to these events, the Khaleej Times newspaper and online site reported that on January 29th  Lieutenant-General Ahmed Gaid Salah, Algerian Deputy Minister for National Defence and Chief of Staff of the People’s National Army of Algeria met at the headquarters of the Military College at El Ain in Dubai, with counterpart Lt-General Hamad Mohammed Thani Al Rumaithi, Chief of Staff of the UAE Armed Forces.  Expanded bi-lateral military cooperation was discussed.

According to the United States Department of Energy, the Emirates have the world’s seventh largest natural gas deposits but investment in sophisticated techniques are required to process it into liquid natural gas, which can be offered by Algeria, Russia, France and the United States, among others.

Will Russia play an expanded role in across the Maghreb and in the Sahel regions of Africa?

The threat potential in and around the Tindouf camps and elsewhere in southern Algeria continues to grow.

Russian Foreign Minister Sergey Lavrov has met three times with Algerian counterpart Ramtane Lamamra over the past six months, most recently on February 11th, in Moscow. While a broad range of bilateral issues have been mentioned in public communiques the focus has tended to be on the problematic Syrian situation.  A press bulletin issued after the Moscow meeting featured generalities and did not go beyond Syria. 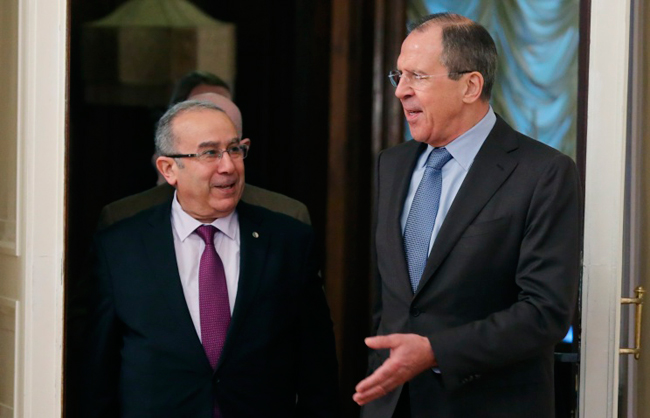 Washington’s response to security issues across Northern Africa and West Africa has taken on a back to the future dimension and continues to drive the growth of the Pentagon’s Africa Command strategy.

The first of four destroyers featuring sophisticated guided missile systems arrived recently at its new home port at the U.S. Navy base at Rota, Spain, near Cadiz.  Spain’s government has approved temporary stationing of an additional 500 U.S. Marines on Spanish soil, raising the total troop count to 1,000. Spanish troops have already conducted joint training operations with the English language version of El Pais reporting that their objective is to operate as a rapid response force.

Algeria will hold a presidential election on April 17th. Some voices that wield influence in the National Liberation Front (FLN) party are calling for president Abdelaziz Bouteflika, the nation's 76 year old longtime leader, to remove himself as a candidate.

Whatever happens, quiet diplomacy between France and Algeria, including a bi-national coordinating committee for security and military coordination in the fight against terrorism, headed on the French side by premier ministre Jean-Marc Ayrault, and Russia’s fraternal relationship with Algeria, will help maintain the modern infrastructure that supports stability in the geographically largest nation on the African continent.