As the Godfather of association football, FIFA president Sepp Blatter has been implicated in major corruption scandals in the past. But this time with the investigation of Qatar and Russia the prize in this high stakes game could be his job.

Led by Michael Garcia, the former U.S. attorney general and prosecutor who was involved in the Victor Bout affair, FIFA’s internal ethics “chamber” is finalizing its investigation into the awarding of venues for the finals of the 2018 Russia and 2022 Qatar World Cup.

The headhunting has intensified to the point that Union of European Football Associations (UEFA) president Michel Platini of France, a FIFA executive committee member who has been under investigation by Garcia’s group, is bragging in the media that he is the only alternative to replace  Blatter. 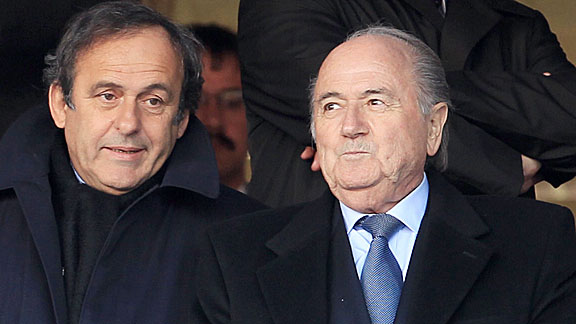 FIFA in the crossfire of geopolitics

With Ukraine and Syria dominating media coverage, billions of dollars are moving around to influence the outcomes in those crises.

Much of that money comes from sources who have a stake in the outcome of the FIFA investigation; Qatar and their arch rival Saudi Arabia, the United States which has pivoted to a Cold War-style posturing and Russia, which western media sets up as the “bad actor” in the Ukraine situation. Add Edward Snowden and Victor Bout to the mix and Octoberfest becomes Propgandafest.

Because of this what many nations and non-government actors driven by western morality call “corruption” has vaulted FIFA’s reputation beyond the entertainment world into the political arena where the results of the private investigation could cause more serious collateral damage.

In the world of Islam (“the Arab world”), India, China, Indonesia and Brazil, however, corruption is not corruption, it is just “life.” This means that those who crusade against what they perceive as corruption become, wittingly or unwittingly the servants of cultural imperialism. It cuts both ways.

For example, Garcia’s corruption investigation touches Qatar. It’s no secret that Saudi Arabia and Qatar are enemies on the FIFA football pitch and are backing different causes and outcomes in the Syria dispute. The United States, with its retro-fitted Cold War propaganda posture, is showing a certain faiblesse in organizing sanctions to punish Russia for what was a predictable regional geopolitical hard power move while the European Union sat on its hands, too busy eating expensive mussels in Brussels to help out before Russia made its game changing move.

FIFA pays the piper. But does it call the tune?

Major sponsors who use football as a global marketing and character building vehicle will pleased when FIFA’s impartial, independent, in-house inquiry runs to form and preserves the status quo. That means strong rebukes, a few firings, dans les couloirs discussions that precipitate individuals choosing to resign their FIFA connected activities.

No matter how much you steal or bribe or fix games when you are in the FIFA club, once you resign, FIFA holds you harmless. That’s how the system works.

Michael Garcia, the American lawyer who also serves currently as FIFA’s “in house” ethics investigator has been on a world tour in an effort to gather information for his highly publicized inquiry. But one place he hasn’t been personally asking questions is Russia.

As a result of his involvement in the Victor Bout affair Garcia is banned from entering the Russian Federation. He was, after all, the holdover U.S. attorney for the southern district of New York during the administration of president Barack Obama in March 2008 (until December 2008) when a federal grand jury indicted Bout on a long list of conspiracy charges.

A former Soviet era air force officer and “esperanto expert” Bout, who Russian media call a “businessman,” was caught in a theatrical “sting” entrapment operation designed to make him violate the laws of the United States. He was not caught committing a real crime like those involved in the arms for hostages “Iran-Contra Affair.”

In this instance he was caught committing a crime conjured up by law enforcement officials, the mechanics of which are not much different than what you see in Hollywood movies like the current blockbuster “American Hustle.”  In the movie a law enforcement operator masqueraded as a wealthy Arab oil sheik in full mufti.

Doubling down on the double game.

Martinez is part of an elite American group of former senior public servants who hire themselves out as investigators, ethics consultants and panel members and provide non-binding opinions.

Kenneth Noble is former director of the U.S. Secret Service and longtime Director of Interpol. Based in Lyons, France at the crossroads of Italian and French organized crime interests, Noble is tangential to the group since his work supports global justice and the world law enforcement community in a world of rapidly changing values and institutions. Noble is on the record being supportive of the Martinez investigation. How much back channel help he has provided his American friends Freeh and Martinez over the years is not publicly known.

Garcia was named to head up of FIFA’s internal ethics group in 2012 after Freeh left the position. Discreet and seemingly beyond reproach, Freeh never openly bragged or took credit for what actions his private findings on behalf of FIFA may have precipitated. 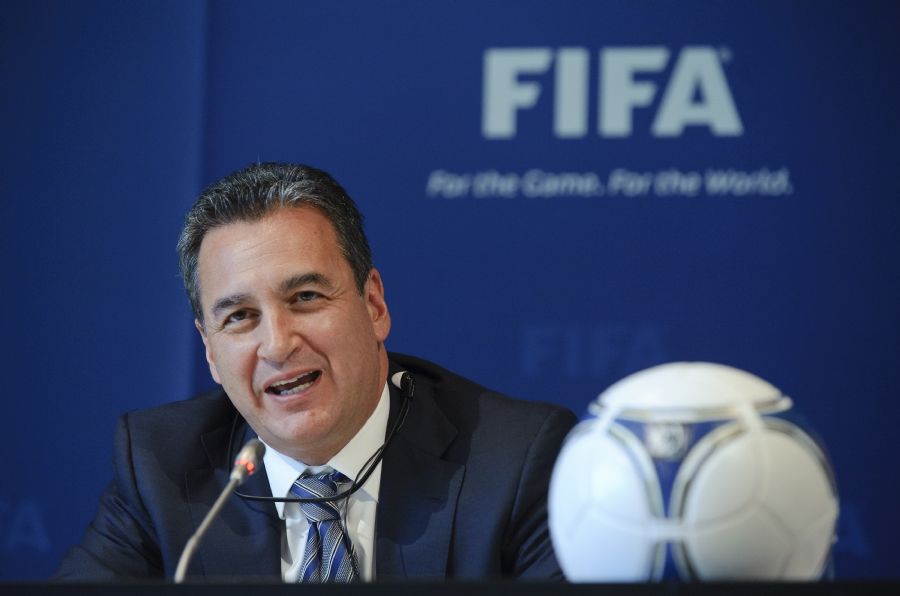 Following the last series of investigations developed during Freeh’s watch FA vice president Mohammed bin Hammam of Qatar was suspended from duties and resigned after it became known he was involved in a movement to challenge Blatter and do whatever it takes to get himself elected as president of FIFA. He was banned for life from FIFA football.

Jack Warner of Trinidad and Tobago had been a vice president and a member of the FIFA Executive Committee since 1983. He also served as president of CONACAAF, the FIFA region that represents the United States, Canada, Mexico, the Caribbean and Central America, since 1990.

After being re-elected for a new term as head of FIFA’s CONACAAF division in the spring of 2011 he resigned. Media reports had been buzzing up a long string of activities including vote buying connected to FIFA World Cup venues and improper sale of FIFA World Cup tickets and other charges. Later he vowed he would “rather die” than be questioned by special investigator Freeh. Major media reports say that he took money from executive committee members by telling them their contribuions would keep Sepp Blatter from turning FIFA into a French controlled organization.

Hammam would later have his ban from football overturned by a court of law.  According to various media sources in London, the Court of Arbitration of Sports in Lausanne, Switzerland found that findings developed during Freeh’s tenure were nothing more than speculation, from a legal basis. But FIFA findings are valid only inside the global realm of FIFA.

FIFA watchers Freeh, Martinez and Noble have all been connected directly or tangentially to the Victor Bout affair. Both The Independent in London and The Voice of Russia have proposed trading Victor Bout for Edward Snowden. FIFA will release the findings of the private Martinez investigation after the World Cup ends in July. Snowden’s one year permit to stay in Russia expires in August.

Although the idea of a Bout for Snowden trade boots the ratings of news and conversational media sites and traditional media the prospects of a deal are highly unlikely.

It’s been known for several years that some of Victor Bout’s activities also served the interests of the government of the United States. The New York Times has covered the story. As one might expect, since it touched the murky world of intelligence connections the covereage drew little attention or response from official or foreign policy circles.

According to The New York Times article bylined Scott Shane and dated August 29, 2010, Lee Wolosky, director for transnational threats at the National Security Council under president Bill Clinton said that he and his colleagues were astonished to learn from news reports that Mr. Bout’s companies were used as subcontractors by the American military to deliver supplies to Iraq in 2003 and 2004, earning about $60 million.

In the article Wolosky indicated that his information came from a book published in the United States, “Merchant of Death,” by Douglas Farah and Stephen Braun.

Farah is a former reporter for The Washington Post foreign service who is now a consultant. He has testified before the U.S. Congress several times.

Braun was chief of operations for the U.S. Drug Enforcement Agency (DEA) from 2005-2008 when the Bush administration was planning the “sting” operation to trap Victor Bout.

Not everyone among FIFA’s inner circle is pleased with the scope of the Martinez in-house investigation. Enough so that it was reported recently in London by The Times, and The Guardian, that unnamed FIFA officials attempted to launch a “plot” to remove Garcia from his job during his recent surprise visit to FIFA’s huge headquarters complex and underground bunker in Zurich.

The “palace coup” attempt to oust Garcia was confirmed in the London media by Jim Boyce, a FIFA vice-president who is Britain’s representative on the 24-man FIFA executive committee. Another member of the committee, Prince Ali Bin al-Hussein of Jordan and UEFA boss Michel Platini backed up Boyce’s story.

Platini noted that while he was aware of the “palace coup” activity, that he personally did not directly see any activity with the motive of removing Garcia. The names of the alleged "coup" perpetrators have not been made public as of this posting.

A few years ago when FIFA was accused of improper activity president Sepp Blatter invited his old friend Henry Kissinger to join a review board that would analyze its workings and issue recommendations.

The tactic of bringing on the man who helped make “soccer” a multi-billion dollar enterprise in the United States was to assuage the mounting concerns of investigative journalists, corporate ethics enthusiasts and millions of irate fans everywhere who think the FIFA culture is innately corrupt.

Kissinger, who recused himself from accepting Blatter’s offer to participate in a “solutions committee” back in 2011 for personal and business reasons, offered Blatter and FIFA one oblique word of free advice, “modernize.”

The recusal of Kissinger in 2011 was followed by FIFA selecting former U.S. attorney general Garcia to replace former FBI director Freeh the following year, 2012. Meanwhile the organization’s reputation continues to be synonymous with corruption. That’s a tough challenge for sports diplomacy and sports marketers to overcome.

The tectonic plates of geopolitics

The impact of the FIFA private investigation. The future of Edward Snowden and Victor Bout. Conflict resolution in Syria and Ukraine. All of these events will intersect in the next few months in the real world and in the virtual world of social media and digital diplomacy that thrives on the internet. For those who posit that geopolitics and hegemony are dead concepts, the convergence of these forces has the potential to change the geopolitical landscape in the same way tectonic plates change the surface of the Earth.

That’s all I have to say to everybody for now. As always, comments, rants and fulminations are welcome;)