Can Russia help save Peronist Argentina from itself?

In a move that is likely to heat up South Atlantic oil politics it has been announced that Russian president Vladimir Putin will visit Argentina after attending the BRICS summit in Brazil.

The visit comes at a time when the ruling Peronists are once again falling into disarray thanks to their economic policy blunders.

During the regime of Peronist president Carlos Menem the nation defaulted on $97 billion in sovereign debt, some of which remains in dispute.

During the late 1960s and early 1970s, with “Pocho” exiled in Spain, left wing Peronist Montoneros created a shadow guerrilla government that conducted a civil war in some regions of the nation. Peron’s return set off years of bloody internecine warfare in the party designed to eliminate the Montoneros.

At the same time the policies of witch doctor and social welfare minister Jose Lopez Rega put the economy on the road to ruin and gave impetus to the “Dirty War” which segued into a coup and the ill-fated attempt by Argentina’s military junta to occupy the strategic Malvinas (Falkland) Islands.

In search of a money machine

Last year Argentina’s president Cristina Kirchner said she wished she had a little machine that could print money.

In a nation famous for its counterfeiting and capital flight president Kirchner now needs a bigger money machine and the Kremlin and Russian intelligence are aware of that. Cristina’s government no longer has the political capital to pressure the media to hide the fact that her government has created another economic meltdown.

Argentines are paying more for the parallel “blue dollar” than they pay to buy Euros. In New York, federal district court judge Thomas Griesa has just ruled illegal the recent payments made by the Kirchner government to some banks holding bonds issued by the government of Argentina because the move favors one group rather than including all institutions holding defaulted sovereign debt.

Poneman met with president Cristina Kirchner and reviewed with her progress made in the ongoing bilateral energy partnership, which includes development of smart grids and other sustainable technologies. He also discussed unconventional extraction methods, including fracking and horizontal drilling, in a meeting with Economy Minister Axel Kicilof, who is the intellectual author of Argentina’s controversial expropriation of the privatized national oil company YPF.  With the reputation of U.S. oil companies involved, Poneman has Argentina on a short leash regarding the energy partnership and will check back on progress at the end of July.

U.S. energy companies, including Chevron, have acquired interests in the “new” YPF.

In a recent visit to Moscow Argentine foreign minister Hector Timerman held discussions with counterpart Sergey Lavrov, who confirmed the Kremlin's support for Argentina's position regarding the disputed Malvinas-Falkland islands. The United States does not support Argentina's claim.

With nearly 30 years of experience as an author, lawyer, scholar and public official who follows Argentine affairs, Poneman also reached out to an emerging generation of students and faculty at a forum held by the University of Buenos Aires; discussing sustainability and U.S. president Barack Obama’s climate change initiative. 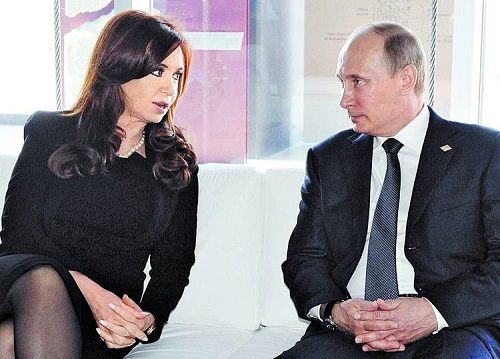 According to published reports in the Buenos Aires Herald, and elsewhere, the Putin visit to Argentina will include discussions on oil, arms and heavy equipment. The outcome of the visit could impact Argentina’s energy and economic relationships with regional allies it shares with Russia, Bolivia and Venezuela. South America is wide open for energy business and the budding relationship between gas producers Bolivia and Algeria are a reminder of that.

The upside for Russia is that none of the Latin governments have openly supported the U.S.-led sanctions regime designed to punish Russia for its presence in Ukraine and Crimea. There is also an opening for bilateral commercial deals since a highly publicized trade agreement between the Mercosur (Mercosul) economic union and the European Union (EU) has been slow tracked due to internal bickering among the EU nations.

Who’s really in charge in Argentina?

The primary question president Putin and his team face when they visit Buenos Aires is who is running the show.

When she was United States secretary of state Hillary Clinton on more than one occasion questioned the mental health of president Cristina Kirchner and even caused a public diplomacy kerfuffle, implying that Argentina’s president was not a person capable of running the government. Ironically, ABC News and other U.S online and print publications have reported that Ms. Clinton, a leading contender for the Democratic Party presidential nomination in 2016, had surgery in December, 2012 to remove a blood clot in her  head.

BBC and other major media reported that president Cristina Kirchner had successful surgery in Buenos Aires late last year to remove a blood clot on her brain after complaining of numbness in her left arm.

During her leave from governing the presidency was assumed by vice president Amadou Boudou.

Now, with Amadou Boudo no longer a credible vice president to succeed Cristina and a complicated succession issue running in the background the heavily stage managed appearances of the Argentine president are an indication that the personal attack on her leadership ability by Hillary Clinton continue to have credibility.

Boudou, a swashbuckling, motorcycle riding, larger than life character for over a year has been fighting charges of “passive” corruption and bribery that have turned into a major legal battle that make his leaving the government a fait accompli.  As of late he has been out of the country, on an extended tour of Central American nations.

Without a vice president, technically, the succession to fill in temporarily for the president if she or he becomes unable to rule falls to the vice president of senate Gerardo Zamora of the minority Radical Civic Union. The Peronists are perplexed over how to resolve this issue.

A Broke and Balkanized Argentina 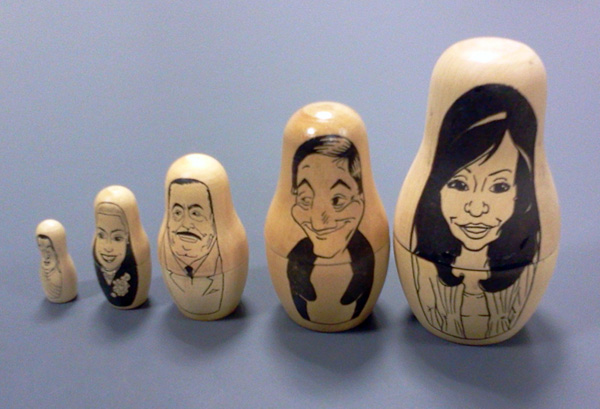 The political reality is that under Cristina’s leadership Argentina is broke. Her government been selling off, expropriating and reselling large chunks of the national patrimony including the state energy company YPF, to foreign interests as if it was a corrupt  Ponzi Scheme.

The Kirchner government also nationalized the newsprint paper manufacturer Papel Prensa, which was owned in part by the Clarin newspaper, and other owners, namely a prominent Jewish family from La Plata one of whom had ties Argentine Army intelligence and the Montoneros. Supporters of the president and the Peronist faction founded by her late husband and president Nestor, known as Kirchnerismo, are considered by some influencers and analysts as the biggest vendepatrias in the history of the Nation.

For the uninitiated, the term vendepatria in Argentine political slang refers to a person or institution that sells out to or otherwise aligns with a movement that sells parts of the national patrimony. It became popular when General Juan Domingo Peron and his wife Eva came to power and was generally directed at those who supported the policies of the United States.

In addition, disputes arising from provinces forming regional alliances to compete for the Nation’s scarce funds are Balkanizing the national political landscape, making it more difficult for Cristina’s media team to fend off charges made by The International Monetary Fund (IMF) and The Economist of London and others that her government has long been manipulating financial information about inflation and other key indicators that influence financial markets.

Cabinet Chief Jorge Capitanich, from the northern province of Chaco and the first politician of Montenegran ancestry to be elected as a governor, has led the Kirchnerista efforts to muzzle the media, saying that the press, particularly their old enemy Clarin, are guilty of a concerted effort to damage the reputation of the government.

Peronism and the prodigal son syndrome

In a recent study, American consultant and journalist Douglas Farah, who exposed the relationship between the U.S. government and Russian and former Soviet arms broker Victor Bout, makes a convincing, albeit polemical claim that Maximiliano “Maxi” Kirchner, the oldest son of late president Nestor and Cristina Kirchner is the top behind the scenes influencer, advising his mother about the choice of cabinet members and others who advise her on conducting government affairs.

Spanish legal personality Baltasar Garzon, who has been an adviser to WikiLeaks and the government of Ecuador, received a residence permit in Argentina in 2012 and for a year was a frequent visitor at the Casa Rosada (government house) ostensibly as an adviser to the president on political matters.

But, as Farah has pointed out, Maxi Kirchner’s circle of influence draws its talent from his membership in the left wing Peronist group known today as La Campora, many of whom still favor dialectical materialism and other convoluted Marxist-Leninist economic models.

Axel Kicilof, the current economy minister, is a member of La Campora and a personal friend of Maxi Kirchner.

La Campora is named after acting president Hector Campora, who fronted as temporary president during the process that saw Peron return from exile and lead the Nation in 1973.  A dentist, Campora was also tolerant of the revolutionary Montoneno faction of the Peronist movement that controlled the city of La Plata outside Buenos Aires, where Nestor and Cristina Kirchner lived as students.

Before it was rebranded by the Kirchners La Campora was known as Tacquara (the spear) and its leaders included Mario Firmenich, who was from a good family and led the large Montonero organization.  Firmenich escaped to Cuba during the “Dirty War” and was friendly with Fidel and Raul Castro. He later returned to Argentina as a hero and in 2007, and in an effort to conceal public information about his past, his WikiPedia entry was been removed.

Clearly, the purpose of the Putin visit to Argentina is to do business and not become embroiled in Argentine schemes and scams developed through prodigal son politics.

According to reliable source Mercopress, Maxi’s La Campora faction is involved with the marketing of “Cristinushkas” that feature images of his mother and father, and “El Pocho” Peron and resemble  popular wooden painted folkloric dolls one finds in Russia.

If the guns, natural gas and heavy equipment business goes well between Russia and Argentina maybe the "Cristinushkas" can be marketed to tourists in the Arbat;)