Calling the BRICS development bank “an insurance policy against the risk of U.S. sanctions,” experts at the prestigious Brookings Institution have joined Washington’s effort to disrupt the Russian economy and punish nations who do business with it.

Branded as the world’s most influential think tank with an endowment upwards of $262 million, Brookings has been on Uncle Sam’s payroll since 1916, providing guidance on domestic and international policy issues.

In 2010 when then-Russian president and current prime minister Dimitry Medvedev visited the organization’s headquarters in Washington and gave a short speech and took questions from the audience Brookings commentators gave him good marks for his openness and willingness to dialogue. 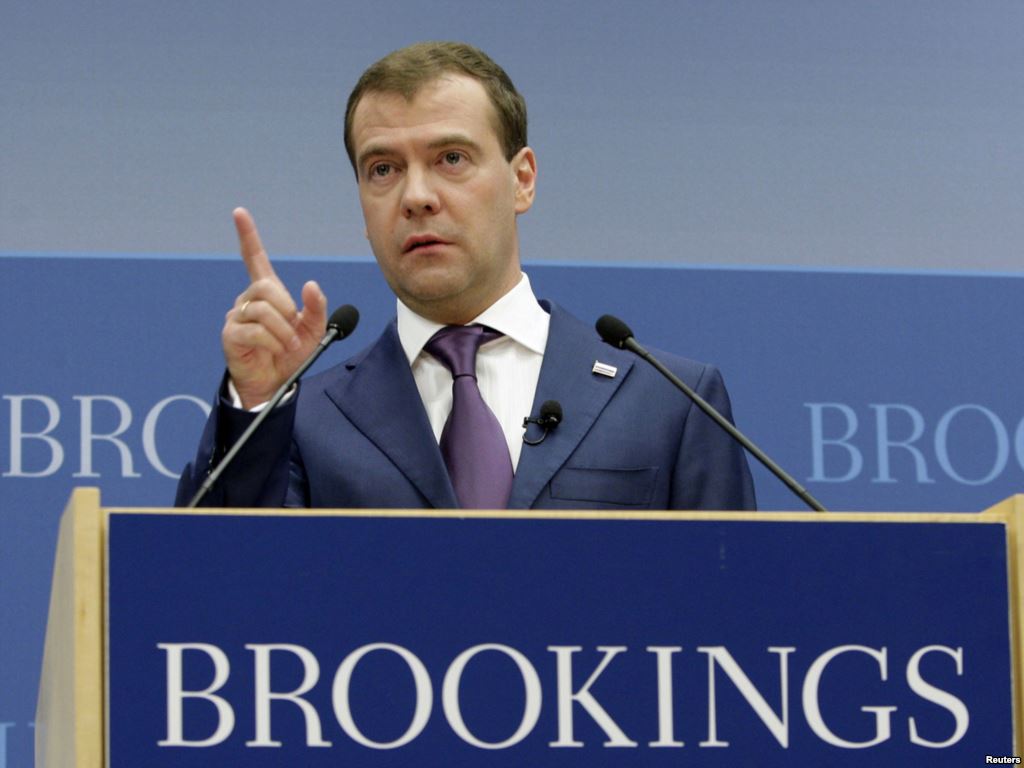 The image credit is rferl.org

Until early this year, diplomatic interactions between Russian Foreign Minister Sergey Lavrov and U.S. Secretary of State John Kerry showed the willingness of presidents Vladimir Putin and Barack Obama to dialogue too.

But complications involving anti-Assad Islamists  supported by U.S. interests, taking part in the fighting in Syria, and Russian allegations that Chechen and Azeri extremists have been involved with the military components of Washington’s proxy regime in Ukraine have inflamed fears of a full blown front size ground and air war.

For now the sanctions regimes being imposed by major powers-- the United States and its NATO allies, and Russia-- has put food exporters in the crossfire of what is destined to become a long and costly episode of a different kind of war, economic warfare.

BRICS member Brazil, and Argentina, another major food exporter and prospective candidate for BRICS membership, could face santions from Washington.

Expecting a windfall, Brazil puts the cart before the horse

Unfortunately, the same mixture of nationalism and overconfidence that saw Brazil take winning the FIFA World Cup for granted only to watch its millionaire stars break down psychologically and cry before hundreds of millions on world television is cropping up again.

Food deals mentioned by Russian agriculture minister Fyodorov last week and covered by major global media are already being used by Brazilian media to validate Brazil’s self-perception as a peer to the major world powers. The hype could benefit president Dilma Rousseff’s campaign to win reelection and give her Workers Party coalition a fourth consecutive term in power, unprecedented since Brazil returned to civilian government in 1985.

Currently, around 41% of Brazil’s outbound foreign trade is generated by agricultural exports, which require low wage peasant labor in the interior to stay competitive.

Citing demand from Russia as their excuse, producers, distributors and retailers are raising prices on basic food items and processed foods, impacting low and middle income families who vote to elect a new president in less than eight weeks.

By flexing its muscles as a major food exporter Brazil is helping paint the target for Washington to impose the sanctions the Brookings experts have predicted in an article that assumes U.S. hegemony in Europe and the Americas.

After it went off the gold standard and effecitvely decapitalized during the Cold War the United States needed to make it attractive for those who profited from selling America goods it could no longer produce efficiently and otherwise needed to hold  fiat dollars, to buy bonds and other treasury instruments to keep the U.S. economy afloat.

Over time the strategy took the United States from being a balanced budget nation to the world’s biggest debtor.

China, which became a major world power with a permanent seat on the United Nations Security Council during this period also became the world’s largest holder of U.S. soverign debt instruments.

The U.S. strategy of loosely regulating the packaging and reselling of domestic debt, particularly home mortgages, touched off the domestic U.S debt crisis in 2008, which did not become completely evident due to media curation until after the presidential election and the victory of Barack Obama, and the global crisis that followed and continues today.

Now another currency war is shaping up.

Beijing  has shown its appreciation for the China-bashing campaign led by Washington and its coterie of friendly economists. Anglo-American propaganda suggests that Beijing continues to manipulate its currency while Washington continues its quantitative easing and feigns the innocence of a choirboy.

China dumped $45 billion in U.S. treasury instruments in the one month period from November to December, 2013.

According to the May TIC report issued by the United States Treasury, Russia dumped $49 bilion worth of its $149 billion in U.S. instruments between October, 2013 and March 2014, and is selling off more as relations between Moscow and Washington continue to deteriorate.

Brazil, among nations, is the fourth largest holder of U.S. treasury instruments with $250 billion. It dumped around $10 billion in U.S. government paper in 2013 but bought $5 billion back after the visit to Brazil of U.S. Treasury secretary Jacob Lew to Sao Paulo in March for talks with finance minister Guido Mantega and Central Bank director Alexandre Tombini in what was billed by the U.S. media as a fence mending visit. What if Brazil wants to withdraw funds to help drive growth in its sluggish economy?  Hypothetically, Washington could say, "sorry, you trade with Russia, you are sanctioned. Perhaps we will reconsider if you change your position."

The influential Frankfurter Allgemene Zeitung is reporting that senior officials of Chancellor Angela Merkel’s Christian Democratic Union (CDU) have joined with influential members of the Social Democratic Party (SPD) and the Greens in calling for a boycott of the FIFA 2018 Russia World Cup.

With Obama’s Scare Force leaving no boycott behind, how long will it be before there are media reports of “just say no to Rio Olympics”?