Don’t Bite Off More Than You Can Chew: Brazil After the Olympics

Research fellow at Insitute of Latin Anerica of RAS

For the first time in the Olympic history, the games are held in South America. Seven years ago, winning the Olympic bid for Brazil was another way to demonstrate to the world its breakthrough development and increase its influence. However, unlike in 2009, when Brazil won the bid with relatively good economic indicators, the situation in the country today is very unstable.

For the first time in the Olympic history, the games are held in South America. Seven years ago, winning the Olympic bid for Brazil was another way to demonstrate to the world its breakthrough development and increase its influence. However, unlike in 2009, when Brazil won the bid with relatively good economic indicators, the situation in the country today is very unstable.

The Olympics are held against the background of grave political and economic crises in the country. Governmental instability stemming from Dilma Rousseff’s suspension, undying corruption scandals, and the grievous state of Brazilian economy, which dropped by 3.8%, turned Rio 2016 into one of the worst prepared for Olympics.

At the same time, the region is swept with a Zika virus epidemy, which had threatened to have the Games relocated. Besides, if Brazil was the initial focus of the virus, today Zika cases have been registered in over 50 countries. Nevertheless, two months prior to the beginning of the Rio Games, the World Health Organization (WHO) did state that there was “very low risk” of the virus spreading, thereby permitting to hold the Games.

Governmental instability stemming from Dilma Rousseff’s suspension, undying corruption scandals, and the grievous state of Brazilian economy, which dropped by 3.8%, turned Rio 2016 into one of the worst prepared for Olympics.

Before the start of the Olympics, the population of Brazil actively expressed their discontent with holding the Games during a grave economic crisis: the investment climate is deteriorating, the national currency plummeting (over a year, the Brazilian real lost a third of its value in relation to the US dollar), the unemployment is growing (April 2016 data: 11.3%, whereas it was about 8% in April 2015). The Olympic expenditures growing over seven years also contributed to mounting tension. Initially, Brazil planned to spend 28.8 billion reals, but ultimately, they spent over 38 billion (other estimates give an even bigger number).

Holding the Olympics in Rio proved to be a hard task for the host country and showed that negative economic consequences would come hard on the heels of the Games and would require a careful analysis.

REUTERS/Adriano Machad
Eric Ehrmann:
Russia and Brazil - What Will Come After
Rousseff?

It should be said that Rio de Janeiro’s traditional problem of street crime had been a pressing issue for many years already. Brazil is among the countries with the highest homicide rate: 30 per 100 thousand people, according to the 2016 data.

The weak security system of a global-scale event laid bare two aspects going deep down into Brazil’s social sphere. First, the Brazilian society is sharply polarized, and it begot the favela phenomenon: favelas are illegally built slums populated by the poor. About 23-24% of Rio’s population, that is, about 1.5 million people, live in favelas. Thus, almost a quarter of Rio residents come from bad neighborhoods closely linked with drug trafficking, prostitution, street gangs, and crime. The poverty and low quality of life in the favelas made for a sort of an incubator for multiple muggers. Second, the police are underfinanced and paid irregularly, which does not inspire them to do their duty. Shortly before the Opening Ceremony, Brazilian police officers and fire fighters went on strike in the airport where they met the arriving journalists and athletes with a banner saying, “Welcome to hell. Police and firefighters don’t get paid, whoever comes to Rio de Janeiro will not be safe.” And although the authorities employed 85 thousand professional soldiers and police officers to maintain law and order during the games, sad incidents could not be avoided. The muggings and attacks on foreign athletes became more frequent; Russian athlete Evgeny Korotyshkin was mugged, as were American swimmers Ryan Lochte, Gunnar Bentz, Jack Conger, and Jimmy Feigen. Even Australian Paralympians were attacked. In fact, the Olympics prompted a crime surge in the city. Fans’ regular complaints and the indignation of delegations’ members concerning the lack of proper security could negatively affect the tourist flow into Brazil, which had earned the reputation of an unsafe country.

Environment: from desires to reality

Brazil is among the countries with the highest homicide rate: 30 per 100 thousand people.

Today, Brazil tends to create an international image of a country, following a sustainable development concept. Brazil wishes to posit itself as a state that strives for a rational use of national resources and is environmentally conscious. Unfortunately, the location of the 2016 Olympics showed the world an opposite picture: a high pollution level and contaminated water.

Here China’s example would be appropriate. China also has certain environmental difficulties, yet, unlike Brazil, China poured efforts and serious money into resolving environmental problems before holding the 2008 Olympics. According to estimates, air purification, modernizing sewage water filters and improving the recycling system cost 20.5 billion dollars during ten years before the Olympics.

In fact, the Olympics prompted a crime surge in the city.

Brazil’s municipal, state, and federal authorities assured that 12.2 billion dollars of the allocated budget would be spent on building the required infrastructure and on improving the state of the environment. In 2009, Brazil pledged to spend 4 billion dollars to cleanse the harbor (intended to hold the Olympic competitions) from pollution and sewage, but ultimately it allocated only 170 million dollars for the task.

As a result, the athletes were forced to compete in an unfit environment risking their health in the process. Theoretically, the Olympics were a good reason to resolve overdue environmental problems, yet given the fact that the issue went unresolved before the event which held the world’s eyes riveted to Brazil, chances that the problems will be resolved in the future are becoming slimmer and slimmer.

While preparing for the Olympics, the authorities of the state of Rio had to ask the federal government for financial aid of 870 million dollars. For those regions which hosted competition sites, Olympics turned into a financial burden, since Olympic facilities were constructed with money from the budgets of the states forced to deal with loans. The public is displeased that the state has no money to maintain the facilities built for the Olympics and that the tax payers will have to shoulder the burden.

Alberto Ramos, an analyst with Goldman Sachs, believes that investments into the Games were insufficient to bring economic dividends. Goldman Sachs argues that “due to a number of large macroeconomic imbalances that have grown and permeated the economy and the severe drop in confidence indicators, total investment spending has actually been contracting uninterruptedly for 2.5 years.” The situation was not improved by a large number of investment projects linked to the Olympics and to the 2014 FIFA Championship.

For those regions which hosted competition sites, Olympics turned into a financial burden, since Olympic facilities were constructed with money from the budgets of the states forced to deal with loans.

Despite several drawbacks in preparing for the Olympics, the construction did bring about positive changes. The transportation infrastructure build specially for the Olympics will remain useable and in high demand: highway and subway line linking the western part of Rio with the northern and southern parts. A high-speed street car running from the tourist center to the airport will also be convenient. Preliminary estimates say these new routes will make transportation easier for Rio residents and visitors both. When the Games conclude, 3,604 apartments in the Olympic village will be put up for sale. Despite mortgages being available on decent terms in Brazil, only families with above-average income will be able to afford to buy real estate in this neighborhood. Nonetheless, the apartments are attractive as one bypasses the crime-ridden favelas when getting there.

There is also a project for secondary use of construction materials used to build the Olympic facilities. For instance, the Future Arena building will be dismantled, and the materials will be used to build four elementary schools in Jacarepaguá neighborhood. The Olympic Aquatics Stadium, built for the water sports, will be dismantled too, to build two community swimming centers: one in Madureira Park and one in the Campo Grande area. The International Broadcast Centre will be turned into a dormitory. And Barra Olympic Park itself will be transformed into a public park complex.

The Image Effect Is Lost 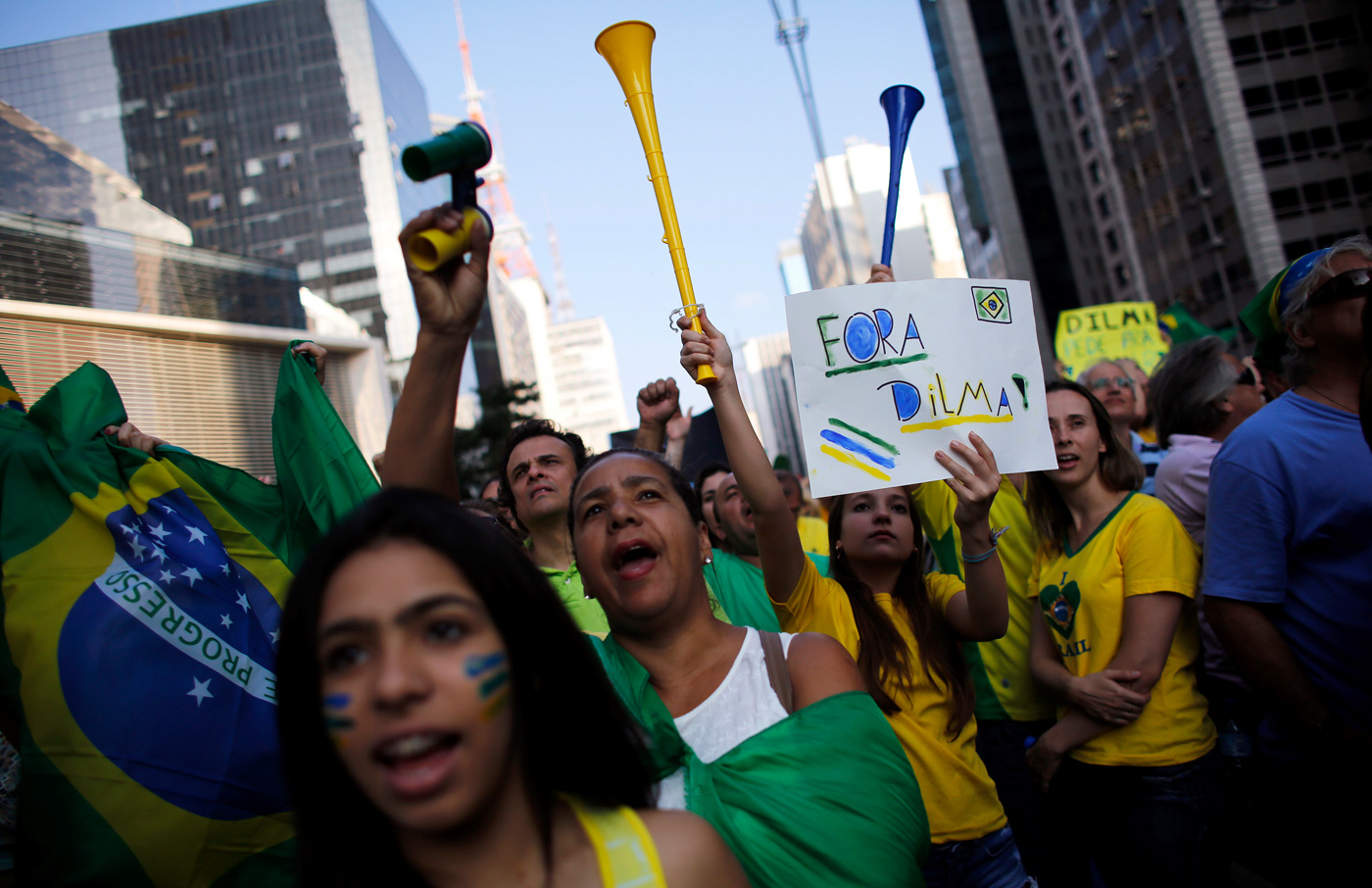 As a rule, a successful international sports event serves to boost the image of the host country in the world, increasing its “soft power,” and directly affects the rating of the head of state. The 2014 Sochi Winter Olympics had a favorable effect on President Vladimir Putin’s ratings in Russia. And China’s success in holding the 2008 Games improved China’s international image as well. In contrast, fans booed Brazil’s Acting President Michel Temer at the Olympics Opening Ceremony, demonstrating their indignation over Brazil’s domestic crisis.

The circumstances prevented Brazilians from fully implementing their plans for the Olympics. The Rio de Janeiro Olympics failed the expectations of guests from all over the world, and they possibly will not improve Brazil’s image. The Olympics also failed to positively influence the domestic atmosphere, to lower the degree of the popular discontent and tension.

When the world’s principal sports event concludes, Brazil will have to deal with the problems it has demonstrated to the world. These are the favelas’ crime-ridden environment, the obligations to maintain and re-purpose sports facilities, the debts to the states’ budgets, and possible unemployment growth with those who built for the Olympics and worked at the Olympics losing their jobs, the need to reduce the environmental pollution, and many other pressing issues.

Brazil will have to deal with all those issues, while overcoming a comprehensive socioeconomic crisis, if the country’s leadership still intends to use the trappings of a law-based democracy on its way to sustainable development to implement its plans in global politics, improve the investment climate and to attract economic partners.

The transportation infrastructure build specially for the Olympics will remain useable and in high demand.

The economic crisis and the socioeconomic tension in Brazil were not caused by the FIFA Championship or by the Olympics. World-scale events just brought to a head the structural problems and demonstrated them to the global community. Currently, it is hard to predict the developments within the Brazilian society, including possible leadership reshuffling, until the corruption investigations are completed and the economic situation improves.

Instead of uniting the Brazilian society, the Games aggravated the protest moods, and Brazilians are united only in their discontent with the actions of the country’s leadership. When the public mistrusts the authorities, the majority of the authorities’ initiatives are likely to be met with certain skepticism that only further exacerbates the resolution of urgent problems. One thing is apparent: the Rio Olympics showed the meager efficiency of an unbalanced system.