The Budget of Disappointed Expectations

The first draft of a full-fledged annual budget of Narendra Modi’s government was presented as a compromise document which combines the preservation of social guarantees promised by the previous administration, and the continuation of market reforms to stimulate economic growth. Nevertheless, the document has angered both the opposition and many supporters of the current prime minister.

The first draft of a full-fledged annual budget of Narendra Modi’s government was presented as a compromise document which combines the preservation of social guarantees promised by the previous administration, and the continuation of market reforms to stimulate economic growth. Nevertheless, the document has angered both the opposition and many supporters of the current prime minister.

The adoption of the first full-fledged federal budget drawn up by the government of the Bharatiya Janata Party (BJP) led by Narendra Modi will be the key event of the new session of the Indian Parliament. This explains the special attention paid this year to the main financial document of the country. A few months before its publication, not only Indian but also international business publications too began to bristle with speculation about what items the new budget was sure to have and what articles of expenditure would be missing. Given the public excitement caused by the expected new budget, it is not surprising that hopes pinned on it were in vain.

The draft federal budget was tabled in the Lok Sabha [1] by Minister of Finance Arun Jaitley on February 28, 2015. To assess the significance of this document, we should take into consideration not so much its figures (they will be adjusted over the course of parliamentary debates), as the reform program revealed by Arun Jaitley in his official speech. Standard promises to overcome poverty, to install electrical equipment in every house, and to repair roads were diluted by quite specific measures to improve the investment climate in India and to stimulate the country’s economic growth.

The new budget has failed those who expected it to become the pivot point for the beginning of a radical revision of the Indian economic model.

In his speech, the Minister of Finance announced plans for tax reform over the next 4 years. The fight against “tax terrorism” (the name given to the tax policies pursued by the previous government) is declared the goal of revising the tax system. It is proposed to introduce starting from 2016 a flat tax on goods and services that should eliminate the practice of double taxation of the goods moved from one State to another and reduce the cost of logistics for entrepreneurs operating in the Indian market. In 2015, the corporate tax rate will be reduced from 30% to 25%, which, according to Arun Jaitley, “accompanied by removal of various kinds of tax exemptions and incentives for corporate taxpayers”, should increase tax revenues and the attractiveness of the Indian economy for business, including foreign companies.

The external conditions favor economic reforms, but Narendra Modi is more a politician than an economist and is afraid to lose political capital at the very beginning of his term.

The new budget puts a special emphasis on investment in infrastructure. Annual allocations for this purpose are to increase to $11 billion. Arun Jaitley has proposed the creation of a National Investment and Infrastructure Fund, to revive public-private partnerships, shifting most of the risks for the implementation of infrastructure projects to public investors, and to free infrastructure bonds from taxation to ensure the inflow of funds from private investors. The Minister of Finance has spoken in support of increasing the ceiling for foreign investment in the insurance industry and defense. Нe also intends to remove the distinction between foreign direct investment and foreign portfolio investment, which will allow Indian companies to increase the volume of funds attracted from abroad.

As expected, opinions on the document were divided. If Modi and his party members believe that the new budget is “pragmatic and prudent”, the opposition finds it “pro-corporate only” and the world media – “mediocre”. The only thing they agree on is that the new budget has failed those who expected it to become the pivot point for the beginning of a radical revision of the Indian economic model, as the budget for FY 1992-93 had once been. What were the reasons for such inflated expectations with regard to the new federal budget? 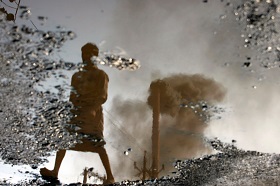 The past year has created a unique environment for structural reforms in the Indian economy. The pace of development in the 2014-15 fiscal year has increased, by preliminary estimates, to 5.9%, which, according to the World Bank forecast, may make India the fastest growing BRICS economy in the next two years, overtaking even China on this indicator (although not without some statistical manipulation). The Indian stock market reacted positively to the election of a new government, showing some of the best results among the developing countries: the Sensex [2] recorded a 25% gain in the last financial year. As compared to the previous three years, India managed to significantly improve its macroeconomic performance, largely due to the oil prices fixed at the lowest level since 2009. Inflation fell from 11.2% to 5.1%, and the budget deficit – from 4.6% to 1.3% of GDP. The foreign exchange reserves of the country reached a historical high and amounted to USD 334 billion by the beginning of 2015. It is hard to imagine more favorable conditions for another economic breakthrough.

However, contrary to what many expected, Modi’s government preferred not to place undue reliance on the state of the market. It has submitted a rather compromise draft budget to Parliament, rather than a radical revision of the whole economic model, which does not allow India to fully realize its enormous economic potential. The draft budget combines somewhat restrained economic reforms, the implementation of which will take at least four years, the expansion of old social obligations, and the preservation of extremely inefficient fuel subsidies lying idle on the Indian budget, while the timing for their abolition (or at least reduction) seems favorable enough due to low oil prices. Advocates of reform heard nothing in Arun Jaitley’s speech on the future of the land acquisition law, which the last parliamentary session had failed to pass, although it was extremely important for the country. While the current economic situation gives India an excellent opportunity to achieve double-digit growth once again, the selective approach to economic reform displayed in Arun Jaitley’s budget speech may not be enough to take full advantage of this unique historic opportunity.

Restraint in Finance Minister’s promises testifies to an intention to reform the economy in a systematic way and to implement the proposed measures, rather than to rend the air with loud declarations unrealizable in the current political situation.

The moderate nature of the new budget is easy to explain. It’s no secret that the external conditions favor economic reforms, but Narendra Modi is more a politician than an economist and is afraid to lose political capital at the very beginning of his term. This will put an end not only to his career, but to his proposed reforms too. There is little doubt that the BJP government really wants to transform the Indian economy rather then just to redecorate it.

However, the implementation of the most radical initiatives of Prime Minister Modi, namely the nationalization of the coal industry and the transfer of coal fields to private ownership through online auctions, as well as the facilitation of land acquisition for industrial companies, is questionable enough due to sturdy resistance from the opposition which still controls the Rajya Sabha [3]. The defeat in the elections to the Legislative Assembly of Delhi has been another bitter pill to swallow for the current government. Therefore, restraint in Finance Minister’s promises testifies to an intention to reform the economy in a systematic way and to implement the proposed measures, rather than to rend the air with loud declarations unrealizable in the current political situation.

1. The lower house of the Indian Parliament.

2. The main stock market index in India, also called the BSE-30. It is the index of the 30 largest Indian companies in terms of capitalization, representing various industrial sectors of the economy, whose stocks are actively traded. The index is indicative of the state of the stock market of India as a whole.

3. The upper house of the Indian Parliament.

Rate this article
Share this article
FOLLOW THE LATEST DEVELOPMENTS
Project
Russia and India: Toward a New Bilateral Agenda
Tags
India, Economy
Reader's choice
HideShow
Egypt May Become the Next Bergamo
Migration Consequences of the “Perfect Storm”: What Effect Will the Coronavirus Pandemic Have on Migration Issues?
Will China’s 14th Five-Year Plan Be Able to Deliver on Its Objectives?
Ambassador Anatoly Antonov's Open Letter
Sanctions Against Russia: A Look Into 2020