As was the case with the American continent before 1492, today, Latin American universities are largely terra incognita for most of the world. Known mostly to scholars from the same continent and a slim number of specialists, they are not found among the rankings of the world’s leading universities. It is now an appropriate moment to find out whether this is a lacuna based in fact on a disregard especially as the Latin Americans themselves are trying to answer this question.

As was the case with the American continent before 1492, today, Latin American universities are largely terra incognita for most of the world. Known mostly to scholars from the same continent and a slim number of specialists, they are not found among the rankings of the world’s leading universities. It is now an appropriate moment to find out whether this is a lacuna based in fact on a disregard especially as the Latin Americans themselves are trying to answer this question.

Latin American Universities on the Margins of Global Top Lists

The key university rankings serve as a sort of stock market listings for national intellectual potential, and are used by investors to assess investment risks for startups, research, and other science-related projects. At the same time, these coveted global top lists have been monopolized by four omnipresent ranking-makers in the United Kingdom, Spain and China, which apply their own investment strategies and use the ratings for decision making. These are the London-based transnational consultancy Quacquarelli&Symonds» (QS),[i] The Times with its THES listing that is published annually in its special supplement, the Spanish ranking by research center Grupo SCImago, and Shanghai Jiao Tong University, one of China's oldest and most prestigious higher education establishments that has been monitoring the global university space since 2003.

All these lists invariably give leadership to the United States, Europe and Asia. For example, the QS top 50 of 2014 includes 21 North American institutions (18 from the United States and three from Canada), 14 European (eight of them British) and nine Asian. The remaining five are Australian.[ii] The Times[iii] and Shanghai[iv] 2013-2014 ratings offer a similar picture. The Grupo SCImago list is the largest and more advanced, since it accounts for research’s innovation value, and also includes research centers. Interestingly, the first place in its top 50 is taken by France’s Centre National de la Recherche Scientifique, with 27 positions going to US institutions, 15 to Europe, and seven to Asia. But this apparently cohesive picture belies a more complex and nuanced reality. Fifth place goes to the Chinese Academy of Sciences and the 13th to Spanish Supreme Council on Scientific Research.[v] Obviously, all global rankings seem geographically adjusted to their producer, with U.S. and European universities broadly dominant.

Absent from the best 50 and top 100 lists, Latin American educational institutions are found only in the top 200 rankings, with just one mentioned in the QS list, i.e. the Brazilian University of Sao Paolo in 132nd place. The Shanghai register mentions only Brazil’s University of Campinas, which is modestly placed 184th. The Times appears to be more exacting and does not include a single Latin American institution in its top 200. The University of Sao Paolo is placed in the 226-250 range, with the status quo for Brazilian universities has remained unchanged since 2011.

One may have expected to see the Spanish ranking be more generous to their Ibero American cousins, but its approach is consistent with that in the other main lists, placing the University of Sao Paolo at the traditionally low 179th position.[vi]

Latin Americans Respond to the Challenge

Latin American universities find it hard to improve their international standing because the regional higher education system is targeted largely to domestic needs.

Many Latin America experts believe that these prestigious global rankings are terribly unfair. In his article The War against University Ratings, celebrated analyst Andres Oppenheimer writes that they have been essentially orientated toward OECD education standards favoring English-speaking countries.[vii] Latin American universities find it hard to improve their international standing because the regional higher education system is targeted largely to domestic needs. One of the global rankings' main parameters lies is the extent to which the institution has worldwide status. As for Latin American universities, their internationalization, to the extent that it exists at all, is more regional than global, which does little to help them enter the global top listings – only 1.5 percent of 2.7 million foreign students choose to enroll in Latin American establishments.[viii]

Having realized that rankings are discriminatory, the Latin American academic community sounded the alarm by holding two regional conferences of governors and specialists at leading universities to discuss ''The Standing of Latin America and the Caribbean in International Higher Education Ratings" – in Buenos Aires in May 2011 and in Mexico City in May 2012 – on the initiative of the UNESCO International Institute for Higher Education in Latin America and the Caribbean. The final declaration of the first gathering, the more substantive and emotional of the two, contained the following basic proposal: "Recommend the authorities in charge of university systems coordination, associations and university networks, rectors and governors, as well as the UNESCO on the whole to develop alternatives to the key ratings for better understanding and assessment of the higher education realities in the region."[ix] In short, Latin America seemed ready to develop its own regional university rankings to counter the global top lists. However, implementation has been partial, with the same rating producers continuing to dominate and even compiling regional rankings as well. QS annually issues lists of the best establishments in Asia, Latin America and even the BRICS countries,[x] for the past three years it has split leadership between the University of Sao Paolo and the Pontifical Catholic University of Chile.

The most ambitious Latin American initiative to launch a regional listing of the best universities came from INFOLATAM, a popular Internet news agency,[xi] which in 2014 made a university top 20 list titled ranking of the rankings[xii] with the University of Sao Paolo in the lead. Brazil was described as the best higher education provider in the region (12 universities) followed by Argentina (three), Mexico and Chile (two each) and, finally, Colombia with one university.

Although the INFOLATAM ranking’s title seems creative, the list is hardly original in essence, as it is a derivative generated by a methodology based on assessments and processing of the major rankings. In fact, it comes from averaging and reducing the assessments produced by key actors to a common denominator, while an authentic Latin American ranking with regional specifics has still to be developed.

Latin America and the Caribbean may boast 1,210 universities, with the region undeniably led by Brazil (303), Mexico (143), Argentina (103), Peru (91) and Colombia (79).[xiii] The only country without a single university is the island state of Santa Lucia. There is a delicate balance between state and private universities, with the share of private institutions at 53.7 percent (Brazil and Chile lead with 70 percent). The sample group for a ranking survey includes 150 universities, one third of them Brazilian.[xiv] 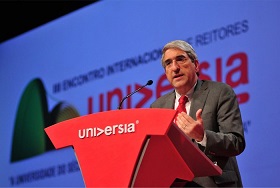 In 2009, there were 17 million students enrolled in universities across Latin America, of which 4.8 million were in Brazil, 2.7 million in Mexico, 2.1 million in Argentina, 1.8 million in Venezuela, and 1.2 million in Colombia.[xv] University students account for 38 percent of young people in this age group, meaning that the region is lagging far behind the industrialized world, where the figure ranges from 45 to 95 percent, i.e. 82 percent in the United States, 47 percent in Sweden, and 94 percent in Finland. Latin America is led by Cuba and Argentina with 88 percent and 68 percent respectively.

Noticeably, most Latin American students trust their domestic higher education and are left unmoved by foreign diplomas, although elsewhere in the world the opposite trend prevails. According to the UN data, since 2000, the number of students willing to get higher education abroad has grown by 75 percent.[xvi] The share of Latin Americans among foreign students is under 10 percent,[xvii] with their main destination being the United States where about 67,000 Latin Americans study subjects such as commerce, engineering, mathematics and information sciences. Due to geographical proximity, most young people come from Mexico (14,200 students).[xviii]

Most Latin American students trust their domestic higher education and are left unmoved by foreign diplomas, although elsewhere in the world the opposite trend prevails. 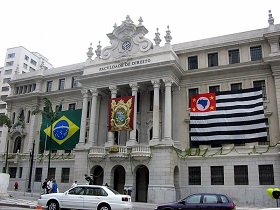 wikipedia.org
Faculty of Law of the
University of Sao Paulo, Brazil

Five years ago, an attempt was made to institutionalize university-level cooperation between Russia and Latin America. Governors of Russian, Spanish and Latin American universities met in 2009 in Madrid and in 2011 in Moscow,[xxiv] although this initiative has yet to be implemented, because in terms of international partners in this sphere Latin America essentially leans to Spain. In July 2014, the 3rd International Conference of University Governors was held in Rio de Janeiro (the previous discussion in Mexico in 2010)[xxv] with the participation of Yale and Oxford universities.[xxvi] Russian attendance was barely visible and included representatives of Siberian Federal University who signed an agreement to join the Universia, a network of Spanish, Portugal and Latin American universities.[xxvii] The Southern Federal State University discussed joint projects with University of Santander.[xxviii] Nevertheless, there seems to be little interest in expanding university education cooperation between Russia and Latin America. The forum "The 21st Century University: the View from Iberian America" was sponsored by the Spanish Santander Bank[xxix] that is ready to invest 594 million euro in the development of Iberian American universities.[xxx] Due to stronger cultural and civilizational ties with Latin America, Spain is increasingly active, and may easily outbid Russia in its nascent efforts to set up cooperation in the higher education field with the faraway continent.

While Russia may boast about 750 universities, Latin American students choose to enroll in just a few.

In a nutshell, Latin America’s university potential is grossly undervalued, with global rankings hardly reflecting objective reality. Latin Americans appear more than willing to go international and are eager to cooperate, as can be seen by the international forums on higher education in Mexico City and Rio de Janeiro. Accordingly, their openness offers an opportunity for the further internationalization of Russian universities, which could seize this opportunity to improve their global rankings.

Consequently, the university niche of intellectual and cultural interaction between Russia and Latin America is significant but still untapped. Most of the top Western universities are unattainable for an average Latin American, due to the obviously high tuition and living costs. And it is only political will that is needed to optimize and stimulate the Latin American student flows to the Russian universities through easing admittance procedures and bureaucratic hurdles.