Given an acute shortage of specialists and managers that businessmen often report as the main problem with Russia’s economy, developing a system for improving human capital is one of the key priorities to date. Special attention should be paid to both improving the education system, and integrating graduates into the economic system and the labor market. Bolashak International Scholarship Program, implemented in Kazakhstan since 1993, offers an excellent example of successful state support for training students abroad.

Given an acute shortage of specialists and managers that businessmen often report as the main problem with Russia’s economy, developing a system for improving human capital is one of the key priorities to date. Special attention should be paid to both improving the education system, and integrating graduates into the economic system and the labor market. Russia is failing to take proper advantage of the human capital of its citizens graduating from foreign universities, and this is the country’s main problem in enlisting the services of graduates in the national labor market. At this point in time, Russia has no full-scale system for either interacting with its citizens studying abroad or using their human resources potential in the domestic labor market.

Bolashak International Scholarship Program, implemented in Kazakhstan since 1993, offers an excellent example of successful state support for training students abroad. “Bolashak” in Kazakh means “future” and the main purpose of the program is to ensure a competitive future for the country’s economy by developing the potential of the younger generations. From 1995 through 2004, about one hundred students were granted the Boshalak scholarship annually to study overseas with all-expenses paid, and since 2005, the number of scholarships has been increased to 3000 per year.

Russia is failing to take proper advantage of the human capital of its citizens graduating from foreign universities, and this is the country’s main problem in enlisting the services of graduates in the national labor market.

The Boshalak scholarship covers the cost of training and living expenses for the entire period of study. To make the program correspond with the state’s priority demands for specialists, in 1993 a list of priority specialties was defined. In 2005, following the predictable labor market saturation with lawyers and economists, the list of priority specialties underwent changes and an emphasis was put on such technical specialties, such as aviation and rocket-space technology, bioengineering, bioinformatics, molecular genetics, nuclear industry, computer science, information technology and systems, information security, computers and software, material science and technology of new materials, nanotechnology and nanomaterials, electronics, radio engineering and telecommunications. 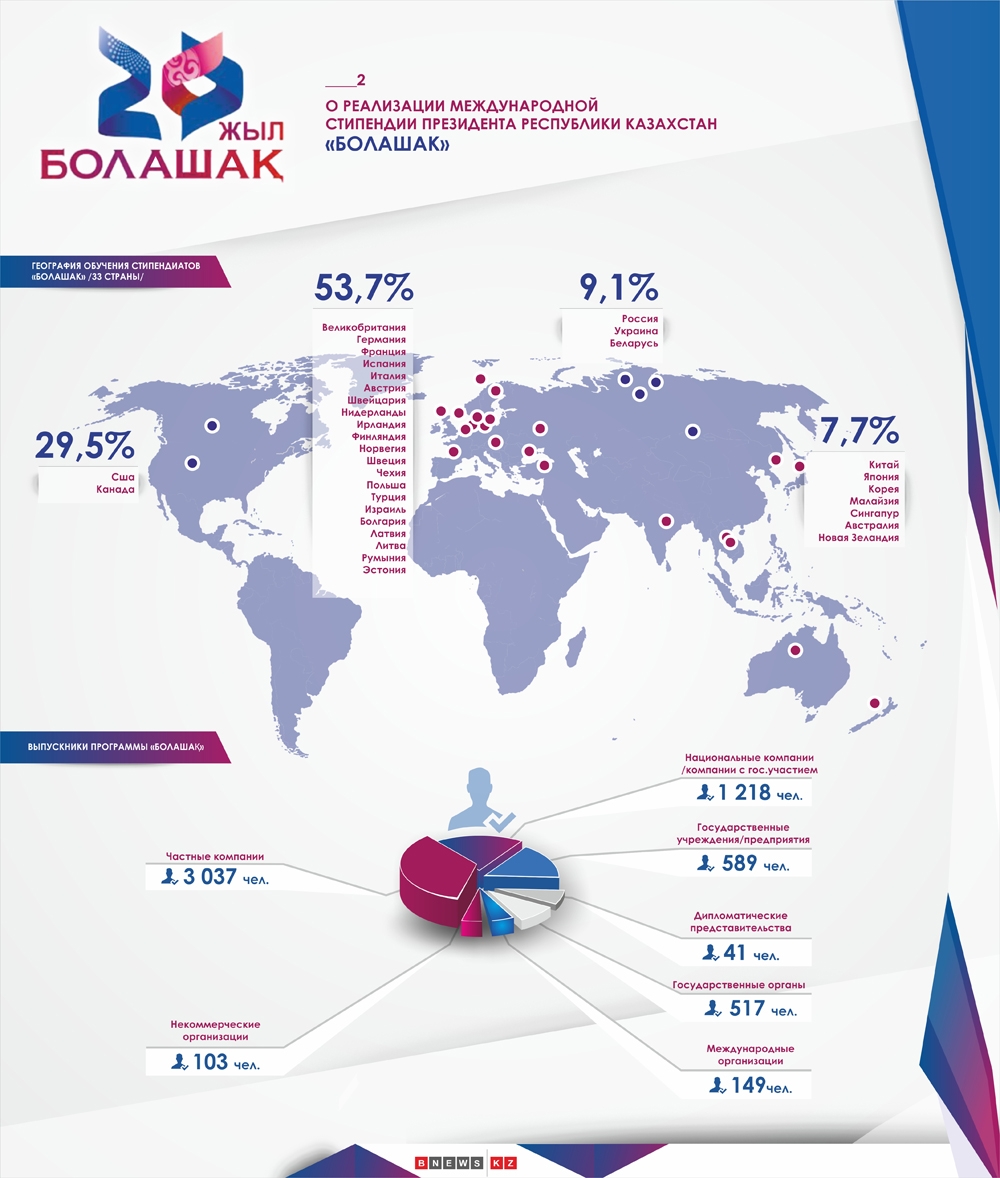 As such, the emphasis is being laid on financing training abroad for the masters and PhD professionals, medical residents and on-the-job training of scientific, educational, engineering and medical specialists.

To make the Program effective, each scholar is obliged to return to Kazakhstan to work for at least five years after graduation. Before leaving to study abroad, a scholar has to mortgage his or her apartment. According to the pledge agreement, the apartment becomes legally charged for five years until the student has worked in the country for the due period of time after training. The property value assessment expenses are covered by the scholars, and the collateral value must not be less than the cost of training. If the apartment costs less, an agreement is concluded with one or more underwriters, who guarantee that they will cover the difference, should the necessity arise.

To get the Bolashak scholarship, candidates have to successfully pass the Kazakh and foreign rounds of the competition. The selection procedure includes the following stages:

Following the stage of the Republican Committee, a contract for training is signed. The execution of the contract is confirmed only by a diploma of full value, no other certificate is accepted for this purpose. During the period of study, the results of intermediate and final exams are sent directly to the Bolashak program administration, and if the progress in studies is found to be unsatisfactory, the scholar is expelled from the training program and has to reimburse the incurred expenses.

After the graduates of foreign universities return from abroad, the state provides them assistance in getting jobs. This function is performed by JSC “Center for International Programs” (CIP), which organizes conferences, seminars and other activities to help graduates to learn about opportunities in the labor market and to meet with representatives of the largest companies operating in Kazakhstan. There has been established the Bolashak Scholarship Graduates Association that also assists graduates of the Program to find the optimal workplace.

To make the Program effective, each scholar is obliged to return to Kazakhstan to work for at least five years after graduation.

It has been planned to significantly modernize the Bolashak program in 2016-2020, including, among other things, targeted the practical training (jointly with state agencies) of specialists for the National Champions project, implemented by Baiterek Holding, as well as for the Financial Center, the Arbitration Centre, and the International Council under the Supreme Court that are being established in Astana. Since 2016, Kazakhstan has tightened regulations for participants in the Program, as well as for universities recommended for training. The list of universities has been reduced by almost 30 percent, and beginning from 2016, it includes universities from the top 100 in key academic rankings. The top 10 business schools, according to the Financial Times ranking, make the list for the MBA degree program.

In 2016, the government plans to spend 19 billion tenge (about 55 million dollars at the average annual exchange rate of 346 tenge per one US dollar) on the Bolashak program. All Bolashak graduates are required to return home: otherwise, scholars will have to pay a 10 percent penalty, apart from refunding all the money spent on their training. Of the 601 scholarships awarded in 2015 under the program, 439 were in master's programs, 40 – doctoral ones, and 122 – for on-the-job training. At that, the main trend in 2015 was an increased number of scholarships for doctoral studies, accompanied by a reduced number of scholarships for practical training. 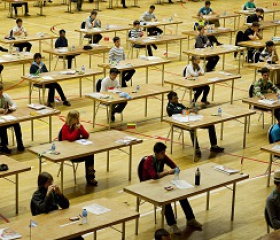 In the over 20 years of the Program’s existence, more than 11 thousand students have been awarded scholarships. Over 8 thousand graduates are working in Kazakhstan. In 2016, the employment level of graduates was 99.4 percent, 503 of them occupy positions in the top chain of command of public and private structures, and another 1203 graduates work in the middle management of public agencies, companies and other state and private entities. A significant part of the Program graduates work in the largest companies and educational institutions of the country: most of them (more than 120 graduates) are employed by JSC “Nazarbayev University,” followed by JSC National Welfare Fund “Samruk-Kazyna,” JSC NC “KazMunayGas,” Kazakhtelecom JSC, JSC National Information Technologies, JSC “Nazarbayev Intellectual Schools.”

It is important to note that the Program not only contributes to enhancing human capital crucial for the economy, but also pays off financially. “If we analyze the State Pension Payment Center data on mandatory deductions, the average monthly salary of Bolashak graduates amounted to 414 thousand tenge, which is quite a good salary in our country. We have calculated that in 10-15 years an average Bolashak graduate returns to the budget in taxes the money spent on his training,” says Gani Nygymetov, President of JSC “Center for international programs” Ministry of Education and Science of the Republic of Kazakhstan.

Kazakhstan’s experience in the field of financing and managing the process of students’ training abroad is extremely valuable for Russia. First, the Kazakh model allows us to create an accounting system of the human capital educated abroad, and creates mechanisms for its integration into the national economy. Furthermore, the system sets priorities for education that would best meet the needs of the economy; that is, it adjusts the process of education to development priorities. The multistage and careful selection provided by the Kazakh system allows for the development o the future managerial elite of the country, while the assistance rendered to the Program graduates when applying for a job, helps develop and enhance the human capital that the country gains after students return home.