Notwithstanding close ties with the US, Iraqi authorities have voiced interest in promoting trade and economic links with Russia. Regular high-level contacts may help Russian companies strengthen their positions in Iraq. The paper below discusses opportunities for Russian businesses in the Iraqi market as well as the challenges and problems they face today.

Notwithstanding close ties with the US, Iraqi authorities have voiced interest in promoting trade and economic links with Russia. Regular high-level contacts may help Russian companies strengthen their positions in Iraq. The paper below discusses opportunities for Russian businesses in the Iraqi market as well as the challenges and problems they face today.

The USSR was traditionally an important economic and political partner for Iraq. Through technological and financial support, the Soviet Union made a considerable contribution to the country’s power sector and, in particular, oil production, and manufacturing industries, as well as helped to bolster the country’s military combat capabilities. Prior to the imposition of sanctions by the United Nations, Russia-Iraq trade volumes exceeded USD 2 bn.

Trade and economic links remained strong even after the disintegration of the USSR owing to a range of intergovernmental agreements: on trade; on economic, research and technological cooperation; on establishing the Russian-Iraqi Commission on Trade, Economic, Research and Technological Cooperation; and on cooperation in the construction of oil and gas facilities. Before the 2003 NATO operation, the Russian business presence in Iraq was led by companies like Zarubezhneft, Tatneft, Soyuzneftegaz, KamAZ, and Power Machines.

With the collapse of Saddam Hussein’s regime in Iraq and the change in the political elite in Russia, the two countries now must build their partnership anew.

For many companies, the business climate in Iraq may seem inhospitable. In the World Bank’s Doing Business survey, in 2013 Iraq was ranked 165th out in a compilation of 185 aggregate indicators. The country was ranked 177th under the rubric “Starting a Business”, 141th in “Enforcing Contracts” and 128th in “Protecting Investors”. 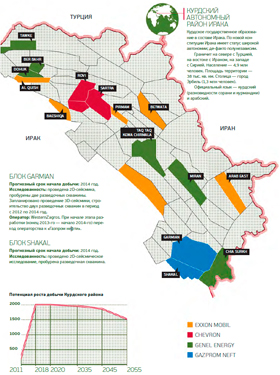 The key obstacle to a broader presence for Russian business in Iraq lies in the lack of guarantees of safety and security for professionals. Although on the whole, the Iraqi government has the situation in the country under control, political conditions inside the country remain troubled, with persisting tensions between Sunnites, Shi’ites and Kurds who are not so much seeking national unity as more power for themselves. Internal political differences provide fertile ground for various terrorist groups, undermining security. Bureaucratic obstacles are multiplying too, and a permit issued by Sunnites may be disregarded by Shi’ites, and vice versa.

There are high risks associated with the Kurdish issue. Although Kurdistan is still one of the safer regions in Iraq, the dispute between Baghdad and the autonomous province capital of Erbil over exports of locally developed hydrocarbons affects the operations of oil and gas companies there. In November 2012, Iraqi authorities demanded that Gazprom Neft rescind its arrangements with the Kurdistan government, threatening that the Russian company otherwise may have to forfeit its Badra oilfield project. This issue is still very much unresolved.

Despite the plans of some Russian companies to invest in Iraqi projects, the potential for investment cooperation has not been properly utilised. An agreement to protect and incentivise capital investment might help to boost cooperation there.

Iraq has retained restrictions on imports of certain grades of steel, thus barring Russian metal products, including oil and gas pipelines, from the local market.

The absence of direct flights, too, has been a setback for the Russian-Iraqi economic links.

In spite of all these challenges Russian businesses, led by oil and gas companies, have remained committed to Iraq. Businessmen working in Iraq appear to be less pessimistic about the local market environment. In particular, A.L. Korsik, Bashneft CEO and Chairman of the Russian-Iraqi Business Council, believes that Iraq has created a “clear and transparent system for doing business”, with tenders held in full compliance with the strict rules and all procedures properly observed.

Trade and Economic Cooperation to Be Revived 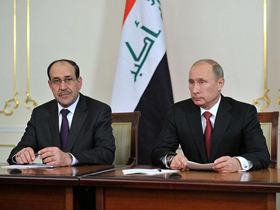 Russian-Iraqi trade and economic relations are being promoted at the highest level. The level of reciprocal trade, which totalled only USD 150 mln. in 2011, failed to satisfy either of the governments. In October 2012 during his visit to Moscow, Iraqi Prime Minister Nouri al-Maliki stated: “Based on our traditional cooperation, we believe the current volume of trade between Russia and Iraq to be totally unacceptable. We need dynamic change, and we must do our best to go back to the high levels enjoyed in the past”. In turn, the leadership in Russia has already made a tangible step towards Iraq, having written off 93 percent of its total debt to the USSR of USD 12 bn. Talking to Nouri al-Maliki, the Russian president expressed his hope that removing restrictions to mutual trade would enable “faster growth” in trade.

Even during Soviet times, the key areas of trade and economic cooperation between the two countries were in the defence and energy sectors, and Russian and Iraqi governments have put a particular emphasis on boosting collaboration in these spheres. A number of contracts in excess of USD 4.2 bn. were signed in October 2012 governing the sale of Russian military hardware to Iraq. Importantly, Iraqi Defence Minister Saadun al-Dulaimi later denied media reports that arms deals with Russia were cancelled. Vladimir Putin and Nouri al-Maliki regularly discuss the status of the 2012 deals, judging by their telephone conversations on 12 December 2012 and 30 January 2013.

According to Yuri Shafranik, Chairman of the Council of the Union of Oil and Gas Industrialists, who has been dealing with Iraqi partners since 2000, the Russian government and its foreign office have ensured that Russian companies in Iraq are not subject to discrimination. Therefore, there are reasons to believe that Russian companies do in fact enjoy reasonable starting conditions for doing business in Iraq.

Working in Iraq: Who and Where 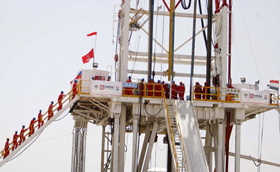 Due to low operational costs in oil production (according to LUKOIL, operational costs amount to USD 3 per 1 barrel of oil - and the high quality of crude, energy is the most attractive sector for Russian businesses. LUKOIL, Bashneft and Gazprom Neft all have a presence in Iraq.

In December 2009, a consortium of LUKOIL and Norway’s Statoil was awarded the bid to develop West Qurna-2, the world’s second largest untapped oilfield with proven reserves of about 13 billion boe. Although after the NATO operation, the new leadership in Iraq revised contracts signed during Saddam Hussein’s rule, following lengthy litigation and negotiations at various levels LUKOIL has managed to reclaim its rights to this oilfield.

A development and production service contract for the West Qurna-2 oilfield was signed on 31 January 2010 for a period of 20 years, with an extension option for another 5 years. Under this contract, LUKOIL had a share of 56.25 percent, North Oil Company (Iraq), 25 percent, and Statoil ASA, 18.75 percent. In May 2012, Statoil announced its withdrawal from the project, transferring its share to LUKOIL, which thereby increased its share to 75 per cent.

According to Andrey Kuzyaev, LUKOIL Overseas CEO, the Russian company will be able to start the upstream production from the field by late 2013 - early 2014, and will have invested USD 5 bn. by 2013. The project’s total capital investment is estimated to at be around USD 30 bn.

LUKOIL operations in Iraq are not limited to the West Qurna-2 project. In May 2012, together with Japan’s INPEX Corporation, this Russian company was awarded the right to conduct exploration with subsequent development at Exploration Block 10. LUKOIL’s share is 60 percent, and that of its Japanese partner, 40 percent. The minimum expected investment amounts to USD 100 mln.

In December 2009, a consortium of Gazprom Neft, South Korea’s Kogas, Malaysia’s Petronas, and Turkey’s TPAO was awarded the right to develop the Badra oilfield. The project lifespan is 20 years with an extension option for another 5 years. The Russian operator has a 30 percent share. According to the Gazprom Neft press service, the estimated volume of capital investment will amount to almost USD 2 bn.

Apart from this project, in August 2012 Gasprom Neft obtained a permit from the Kurdistan Regional Government to conduct exploration and production of the Garmian and Shakal blocks in the south of the province. The resource potential of both blocks exceeds 3.6 boe .

In November 2012, a consortium of Bashneft, UK Premier Oil, and Iraq’s South Oil Company signed a contract for the exploration and production of oil at Block 12. If the commercial reserves are confirmed, the project will have a lifespan of 20 years, and a 5-year exploration budget of USD 120 mln.

Iraqi projects are being viewed with interest by some other Russian oil and gas companies including Rosneft, Zarubezhneft and Soyuzneftgaz.

Russian Business Prospects in Other Sectors 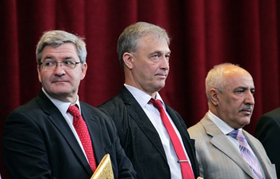 According to Iraqi commercial attaché Azad Hussein Rashid, the Iraqi state hopes to collaborate successfully with Russian businesses not only in oil and gas, which account for almost 90 percent of the country’s economy, but also in power utilities, transport and public infrastructure, and in other manufacturing industries.

Along with oil and gas companies, the Iraqi market is being developed by Inter RAO UES, Technopromexport, Hydromashservice and others.

JSC Power Machines are currently expecting the Iraqi Ministry of Energy to give their final approval of the contractual package, leading to the resumption of their work at the Al-Adhaim Hydro .

With appropriate interest on part of Iraq, Russian exporters could increase their sales of agricultural products and food to this country.

The Iraqi market seems to be of interest to Russian steel exporters of pipes and metal structures, as well as construction companies, while Iraq may have some use for Russian civilian airplanes and helicopters, as well as water purification technologies.

In summary, Iraq appears to hold good prospects for Russian value-added goods. This country is still attractive to Russian oil and gas production companies. Different political circles in Iraq wish Russian business had a more active presence in their market. Iraq presents opportunities for Russian businesses both for revenue-generation and for broadening their overseas experience.

The 1989 trade of USD 2 bn. is not the limit for our two countries. Yuri Shafranik believes that even in post-war Iraq, the trade between Moscow and Baghdad could well grow to USD 10 bn.

Trade and economic collaboration between the two countries could be significantly improved by expanding the contractual and legal framework; Iraq offering better security and safety to Russian workers; lifting restrictions on metallic imports; introducing a more favourable visa regime and direct flights, and ensuring more active participation of businesses in exhibitions both in Russia and Iraq.