Global East on the Rise

Next July the Russian city of Ufa will host the BRICS summit, with the participation of President Putin and the leaders of China, India, Brazil and South Africa, in what seems further proof of how little substance there is behind certain Western allegations that Moscow has been isolated. BRICS account for 25 percent of global GNP, 18 percent of international trade, 45 percent of the world's population, and one third of the Earth's territory. (BRICS is a Major Constant of Global Politics and Economy, www.ictsd.org)

Next July the Russian city of Ufa will host the BRICS summit, with the participation of President Putin and the leaders of China, India, Brazil and South Africa, in what seems further proof of how little substance there is behind certain Western allegations that Moscow has been isolated. BRICS account for 25 percent of global GNP, 18 percent of international trade, 45 percent of the world's population, and one third of the Earth's territory. (BRICS is a Major Constant of Global Politics and Economy, www.ictsd.org)

Unlike the European Union, NAFTA and ASEAN, BRICS cannot boast geographic commonality. However, its unity rests on something just as meaningful: the common drive to greater democracy and justice in international economic relations. The ascent of BRICS presents a challenge to Western supremacy in global affairs from the East or, to be more precise, from the Global East, since the group incorporates non-Western economies from all four continents.

BRICS has already charted significant achievements in its attempts to reform entities that directly infringe upon the new economies’ rights. Delivering results that far exceed joint appeals to amend IMF and World Bank procedures, at its 6th Summit in 2014 in Brazilian Fortaleza, BRICS announced the establishment of the New Development Bank and a currency pool of USD 200 billion.

Today, the group runs over two dozen cooperation formats in the economic and financial areas, from annual summits to working groups on international information security, healthcare, science and technology, and many more. BRICS also has a fully operable Business Council comprising 25 prominent entrepreneurs from its member countries, the Exchanges Alliance, as well as platforms for sharing information and best practices in culture, education and ecology.

From Economy to Politics 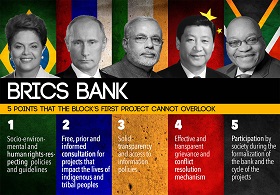 The global economy and politics are deeply intertwined, and today’s landscape is defined by two key factors. On the one hand, because of Ukraine, relations between Russia and the West, primarily the United States, seem to have been plunged into a lengthy new Cold War. As the 2016 presidential election approaches, Washington will likely continue to provoke more diplomatic and even military crises, and interfere in the spheres of Russia's interests. The prospects for markedly better relations between Moscow and European Union also seem frail. But at the same time, U.S.-China dialogue is changing dramatically, as Washington will not accept the rise of Beijing and is constructing countermeasures based on bolstering ties with its allies and establishing new military partnerships. Both factors are helping unite Russia and China on their international arena, including within the BRICS format.

The group's five members share a long-term goal of strengthening the supremacy of international law and the central role of the United Nations and the Security Council in maintaining peace and security. They are eager to strengthen the political component in their cooperation while also expanding consultations and joint action within existing international organizations, chiefly the UN, resisting the West’s assault on regimes it deems ‘uncooperative’ and unilateral action in crisis resolution. BRICS’ position wihtin the United Nations is quite robust, with Russia and China being permanent members of the Security Council, and India, Brazil and South Africa full-fledged candidates to follow suit.

The ascent of BRICS presents a challenge to Western supremacy in global affairs from the East or, to be more precise, from the Global East, since the group incorporates non-Western economies from all four continents.

As the current BRICS chair and Ufa summit host, Russia seems to have every chance to set the pace for the group's future activities. Moscow's strategy involves strengthening trust with partners on governmental, corporate and human levels. The absence of trust means an absence of the cooperation needed to achieve common goals. Hence, the forum will be focused less on expanding interaction formats and more on implementing previously set plans, primarily in the monetary realm, which seems to offer the most promising basis for the BRICS to become an effective international actor.

With Western pressure showing no signs of relenting, Russia needs support from its friends and partners in the East. Therefore, expect a lot of attention in Ufa to be devoted to frequent cases of massive unilateral actions. The United States and its allies have placed sanctions on Russia, and in future other BRICS countries could easily fall victim should they dare disagree with Washington's foreign policy. It would seem logical for the BRICS to jointly develop a raft of measures to help render sanctions internationally unfeasible. 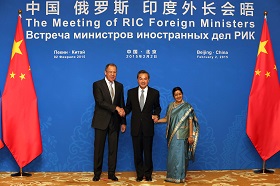 The rules governing responsible behavior in the global informational space are another must, as the swift development and use of IT have made critical national infrastructures vulnerable to new threats. A particular threat is posed by the development, use and proliferation of information weapons that could give rise to information wars and terrorism, all of which have the potential to be as destructive in their potential consequences as WMD. The BRICS states possess advanced information technologies that are extensively employed across all activities. Hence, the time is ripe for proposing a multilateral and mutually acceptable international regime to solidify the principles of respect for state sovereignty, noninterference in other states’ domestic affairs, the observance of human rights and civil liberties, and equality for all countries in regulating the Internet.

At the Fortaleza summit, Russia raised the draft BRICS Strategy for Multilateral Economic Cooperation and the Roadmap for Investment Cooperation that incorporates 37 projects from high-tech to humanitarian affairs. These proposals include the establishment of the BRICS Energy Association and BRICS Reserve Fuel Bank to bolster the group's energy security. With competition for access to energy resources forming the key trend in global politics, a BRICS institution in this area might serve to coordinate states’ energy policies, terms and volumes for energy deliveries, projects for energy transportation infrastructure, energy saving programs and work to improve renewable energy sources.

BRICS is consistently working to see the Western-centric world replaced by a polycentric environment. 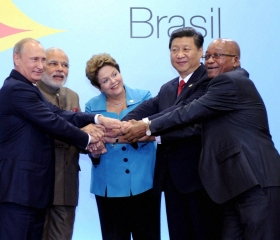 www.clydefitchreport.com
The Results of the BRICS Summit. View from
India

The joint use of the Russian navigation system GLONASS in transportation, public security and farming is estimated to have boosted yields by at least 30-50 percent. Similar impacts are anticipated in other areas. Moscow has also proposed closer market cooperation between BRICS countries that have 30-60 percent of global reserves of certain mineral resources.

Russia supports its BRICS partners' proposals for setting up a joint ratings agency or even a network of ratings agencies. Credit ratings assigned to banks are of paramount importance as they make a key contribution to defining their solvency, financial stability, reliability and reputation. But this sphere is controlled by the big three U.S.-based agencies, i.e. Moody's, Fitch и S&P, which are frequently politically-motivated in their actions - seeking to deliberately diminish the status of non-U.S. entities. A BRICS-owned ratings agency based on the emerging New Development Bank would help strengthen the agency's independence from foreign influences, making it possible to factor in regional specifics for each economy, while maintaining the agency's support on several national markets to improve its global competitiveness.

Expanding BRICS-wide interaction in science and technology is also essential. It is not only the financial dictate that the West employs to impose its will on the rest of the world, it also tightly controls high-tech developments, declining to share them with others. However, each BRICS country may boast a state-of-the-art scientific, industrial and technologic base, while in total the group accounts for a quarter of global high-tech output, and by 2020 this figure could rise to one third. A major technology breakthrough with the joint development of alternative high technologies would make a solid contribution to solving global development problems.

As stated in a document prepared by the Advisory Board of the Russian Federation Military Industry Commission, at the Ufa summit Russia may propose to join forces with China and India to create a joint manned orbital space station.

Cultural contacts should also expand through parliamentary, civil, labor union and youth exchanges. Since the BRICS countries have different civilizational roots, communications and cooperation should give the world a good example of fruitful dialogue and interaction between civilizations. 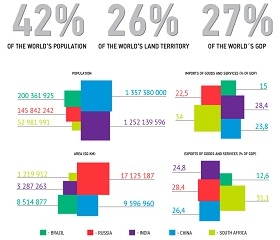 BRICS is working hard to outreach to various partners, including non-BRICS countries and their associations. The initial outreach effort took place in 2013 at the Durban summit with the invitation of leaders from African states, the African Union and sub-regional associations. Fortaleza was the venue for a dialogue between leaders of BRICS and 12 South American countries. The Ufa summit coincides with the Shanghai Cooperation Organization summit: Russia and China are SCO permanent members and India has observer status. A meeting between participants of the two forums as happened in 2009 in Yekaterinburg should help the further rapprochement of the two bodies and help give greater clout to both events.

A Union of the Likeminded

BRICS seems to be more a union of the likeminded rather than an organization per se. It has no governing bodies capable of issuing obligatory decisions, does not intend to confront the West, or form any kind of a military alliance.

However, BRICS is consistently working to see the Western-centric world replaced by a polycentric environment governed by equality and mutual respect for the interests of large and small states in both West and East, mutual economic gains, cultural compatibility and reciprocal enrichment of civilizations, as well as shared responsibility in global affairs. There is good reason to believe that Ufa is just the place for BRICS to take another step in this direction.

Rate this article
Share this article
FOLLOW THE LATEST DEVELOPMENTS
Tags
Russia, BRICS, BRICS summit
Reader's choice
HideShow
Searching for a New World
Russia–India Relations: Successes and Prospects
The SWIFT System: A Focus on the U.S.–Russia Financial Confrontation
International Security Implications of the US-Russia Contention Over the Nord Stream 2
Twelve Steps Toward Greater Security in Ukraine and the Euro-Atlantic Region