Africa in World War II: The Path to Liberation

Africa was affected by both world wars. The African continent, which seemed so far away from the European political conflicts, was compelled to take a very active role in both wars. However, the contribution made by Africans to the victory over fascism remains largely underappreciated.

Africa was affected by both world wars. The African continent, which seemed so far away from the European political conflicts, was compelled to take a very active role in both wars. However, the contribution made by Africans to the victory over fascism remains largely underappreciated.

For Africans, World War II began in 1935, when Italy invaded Ethiopia. In a sense, the war continued – in the form a battle for independence – long after 1945, when Africans demanded that their contribution to the allied victory over Hitler’s Germany be recognized. World War II had a profound effect on the understanding of class, racial and political problems around the world. Essentially, World War II served as a catalyst for crisis in colonial empires and helped to transform the nature of political activities throughout the African continent. Whereas prior to 1945 the African people’s fight against colonial oppression was not so much for self-government as it was for some degree of participation in existing governments, after the war the demand for independence became the basis for all African organizations that were counting on public support. “The year 1945 was a great watershed in modern African history … A key factor that contributed to the rising spirit of indignation in Africa during this period was the return home of African soldiers who had fought in World War II. The imperialists had rarely been able to rely completely on African soldiers and the uprising and protests by the latter played an important role in developing the national African identity … A particularly high level of unrest took place among African forces during World War II … Fighting in distant lands, they became imbued by the spirit of the anti-fascist war and returned home as completely different people”. Once back in their countries, the former war veterans had no desire whatsoever to return to their low-paid hard work and mass rallies, demonstrations and rebellions were organized by present and former soldiers both during and after the war.

There is not much talk in Russia about the African campaigns during World War II. However, by the start of the war Africa (particular northeast Africa) had become a strategic bridgehead for which a fierce battle was waged. In many respects, the military actions in the “dark continent” caused the delay in the opening of a second front. While the allies were fighting for Africa, the Red Army had already launched a counteroffensive. 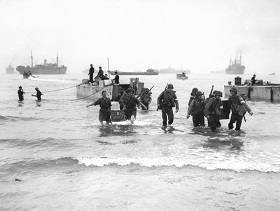 The North African campaign, which lasted from June 10, 1940 until May 13, 1943, involved military action between the Anglo-American and Italian-German forces in North Africa – in Egypt and Maghreb – during World War II. Famous battles between the English and German forces led by General Rommel, who was known as “Desert Fox,” and the landing of Anglo-American forces in Morocco and Algeria (the “Torch” landing operation in November 1942) were among the major events of the campaign. The East African campaign officially lasted less than a year and a half – from June 10, 1940 until November 27, 1942, however Italian soldiers continued to fight in Ethiopia, Somalia and Eritrea until they received the order to surrender in late 1943. French and British troops landed in Madagascar, which served as a supply base for Japanese submarines in the Indian Ocean, in May 1942, and the island was liberated from the Vichy and Japanese forces by November of the same year.

The academician Apollon Davidson wrote that the only fighting in Sub-Saharan Africa during World War II took place in Ethiopia, Eritrea and Italian Somaliland. “In 1941, British troops occupied territories in these countries along with Ethiopian guerilla fighters and the active involvement of Somalis. No military operations were conducted in other countries of Sub-Saharan Africa or South Africa. However, hundreds of thousands of Africans were mobilized for the army of the colonial powers. An even larger number of people had to serve the troops and work for the military. Africans fought in North Africa, Western Europe, the Middle East, Burma and Malaya. There was a struggle in French colonies between Vichyites and supporters of Free France, although it generally did not result in military clashes. The colonial powers had a two-fold policy with respect to Africans in the war: on the one hand, they sought to use Africa’s human resources as much as possible, but, on the other hand, they feared allowing Africans to use modern weapons. Most of the Africans who were mobilized served in auxiliary forces, but many of them nevertheless underwent full combat training and secured military jobs as drivers, radio operators, signal operators, etc.”

Whereas prior to 1945 the African people’s fight against colonial oppression was not so much for self-government as it was for some degree of participation in existing governments, after the war the demand for independence became the basis for all African organizations that were counting on public support.

More than a million Africans fought on the side of the colonial powers in World War II. Few of them initially understood the reason for the war and what they were fighting for. Only a few soldiers knew something about Hitler and fascism.

One veteran, John Henri Smith from Sierra Leone, recalls that his teacher gave him a copy of Hitler’s Mein Kampf to read. “We read what this man was planning to do to black Africans if came to power … This was a book that would compel each and every African to rebel against such a thing, as was the case with me.” So John became a volunteer and joined the British Royal Air Force where he served as a navigator”.

As in 1914, Africans in World War II found themselves drawn into someone else’s war. Starting in 1939, hundreds of thousands of soldiers from West Africa were sent to the European front. Many residents of the British colonies in Africa worked as porters or performed other work related to serving troops. While there were some Africans who voluntarily wished to fight fascism, in most cases Africans were forced to mobilize and sent to the front. 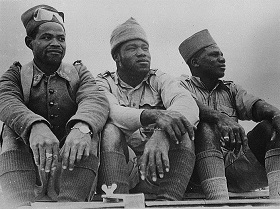 As soldiers or prisoners of war, the Africans on the front were in close contact with European soldiers and the realities of European life. They learned that Europeans were no higher or better and just as mortal and vulnerable as they were. It should be noted black soldiers were often treated in a prejudiced and unfair manner by fellow white soldiers and commanders. Well-known South African political figure Ronnie Kasrils said in his article devoted to South African President Jacob Zuma’s visit to Moscow to celebrate the 70th anniversary of the victory over Nazi Germany that “racial discrimination in the South African army was so deeply rooted that the dead, black and white, were buried separately”. He cited examples of deeds performed by certain South African soldiers and noted that they would have undoubtedly received the highest British military award, the Cross of Victoria, if they had not been black. Instead, at the end of the war black soldiers received overcoats and bicycles as rewards.

The military experience in many ways altered Africans’ awareness of their own position. Upon returning home, many veterans took part in liberation movements, yet some of them were rebuked by freedom fighters because they had fought on the side of the colonialists and oppressors. Many of the African veterans from World War II who are still alive are bitter since their contribution to the victory over fascism was not properly appreciated. Deutsche Welle quoted 93-year-old war veteran Albert Kuniuku from Kinshasa (Democratic Republic of the Congo), the chairman of the Veterans Union, as saying: “I get a monthly pension for fighting in the war of 5,000 Congolese francs (equal to €4.8 or $5.4). This is inadequate for someone who defended Belgium’s interests”.

The colonial powers had a two-fold policy with respect to Africans in the war: on the one hand, they sought to use Africa’s human resources as much as possible, but, on the other hand, they feared allowing Africans to use modern weapons.

Africans were also aware of the Soviet Union’s role in the battle against fascism. The more educated and politically active Africans who fought in the war apparently had a sufficient idea of this concept. However, there were some amusing incidents as well. A senior official from the Africa Institute under the Russian Academy of Sciences and a World War II veteran, Pyotr Kupriyanov, during a Victory Day celebration at the Institute in 2015, spoke about a funny incident: a few years after the war he traveled to Liberia, where he was visited one day at his hotel by an elderly Liberian man who had heard about the Red Army’s successes on the radio during the war and had come to see the Soviet soldier in person. He was surprised to learn that the Soviet soldier was quite young, not particularly tall and that his skin was not red. From listening to the radio, he had formed an image of a giant soldier with a red shade of skin since, after all, only such amazing people were capable of destroying Hitler’s army in the eyes of this ordinary African. 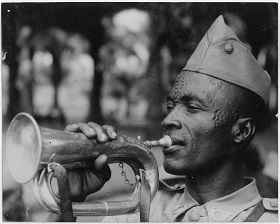 wikipedia.org
A Congolese bugler of the Force Publique, 1943

In the aforementioned article, the South African political activist Ronnie Kasrils noted that “the victory over fascism saved the world from slavery and disaster. It also resulted in the collapse of the colonial system, helped Africa attain independence and contributed to the emergence of armed liberation movements such as ours, which received … support from the USSR and countries in the socialist camp”. He noted that attempts are being made to diminish and distort the USSR’s role in the victory over fascism and rewrite history, but pointed out the danger of such efforts. They are dangerous in the sense that concealing the truth about World War II for the sake of geopolitical interests causes young people around the world to forget the lessons of history. Kasrils noted that fascism is now on the rise in different parts of Europe and that the world must work together to prevent it from spreading again.

Despite efforts to present England and America as the main victors of World War II and despite the true importance of the allied victory in North Africa, the Battle of Britain and the opening of the second front in the west, Kasrils stressed that the main theater of war was the Eastern front and the confrontation between the USSR and Nazi Germany, where the outcome of the war was decided. “The West generates propaganda and lies to conceal the true nature of World War II and the enormous debt that humanity owes the Russian people and the peoples of the former USSR. There can be no doubt that they bore the brunt of the war and saved the world from fascism”.

Just like Russia, it is crucial for Africa to remember the history of its role in World War II as it truly was without any distortions, without diminishing the role of those who fought against fascism and without forgetting their important contribution to the overall victory over this evil.

Rate this article
Share this article
FOLLOW THE LATEST DEVELOPMENTS
Tags
Africa, World War II, WWII, 70th anniversary of the Victory Day
Reader's choice
HideShow
Russia's “Wait and See” Policies and the Libyan Settlement
2020 Forecast: Revealing the Future of the Middle East
Challenges to International Stability in 2020–2025
Meeting with the Delegation of the CASS Institute of Political Science
Non-Economic Drivers of China’s Peacekeeping Operations in Africa