A Difficult Peace: The UN and the Challenges of Modern Peacekeeping

REUTERS/Thomas…
REUTERS/Thomas Mukoya
Peacekeepers serving in the United Nations
Organization Stabilization Mission in
the Democratic Republic of the Congo
(MONUSCO) patrol in their armoured personnel
carrier during demonstrations against Congolese
President Joseph Kabila in the streets of
the Democratic Republic of Congo's capital
Kinshasa, December 20, 2016
0
5926
Add Reader

As the saying goes, peace, like war, must be waged, and the United Nations (UN) has been at the forefront of this battle for almost 70 years. From the UN Emergency Force (UNEF), the first ever peacekeeping mission set up in 1956 at the height of the Suez crisis, to the 2014 UN mission in the Central African Republic (MINUSCA), UN peacekeeping (UNPK) continues to change and adapt to the constantly evolving dynamics of conflict. With at least 40 active conflicts around the world today according to the IISS Armed Conflict Database, the need for UN peacekeeping is as acute as ever, but the institution itself is in flux.

As the saying goes, peace, like war, must be waged, and the United Nations (UN) has been at the forefront of this battle for almost 70 years. From the UN Emergency Force (UNEF), the first ever peacekeeping mission set up in 1956 at the height of the Suez crisis, to the 2014 UN mission in the Central African Republic (MINUSCA), UN peacekeeping (UNPK) continues to change and adapt to the constantly evolving dynamics of conflict. With at least 40 active conflicts around the world today according to the IISS Armed Conflict Database, the need for UN peacekeeping is as acute as ever, but the institution itself is in flux.

The Roots of Modern Peacekeeping

Today, the UN leads and operates 16 peacekeeping missions with over 100,000 personnel on a budget of $7.87 billion, which is less than 0.5% of global military spending. But before delving into the major transformations of UNPK that have occurred in the past 30 years, it is instructive to look at some of its history for it explains much about its current state.

It is critical to understand that peacekeeping emerged as an improvised measure, conceived by the first UN Secretary-General (UNSG) Dag Hammarskjöld as an ad hoc solution to the Suez crisis where troops serving under the UN banner (the ‘blue helmets’) were placed on the Sinai to separate Egyptian and Israeli forces. Even though nowadays peacekeeping has become an integral part of the United Nations, the UN Charter—its bedrock—never made any mention of peacekeeping. It was an invention, a construct, which continues to exist in the legal grey zone between Chapter 6 (“Pacific Settlement of Disputes”) and Chapter 7 (“Action with Respect to Threats to the Peace, Breaches of the Peace, and Acts of Aggression”) of the Charter, and so is often referred to as “Chapter 6 and a half”.

Peacekeeping operations have become more complex – in structure, tasks they carry out, mandates they receive, and technologies they use.

The UN had originally been envisaged as a collective security system akin to the League of Nations, but the Cold War-induced paralysis of the UN Security Council (UNSC) made traditional-type collective security impossible. Thus states would eventually accept and recognize peacekeeping as an important instrument of multilateral conflict management, because it allowed them to overcome the zero-sum logic of Cold War politics, avoid direct interventions and possible great power confrontations where their core interests were not at stake. It also helped effectively deal with decolonization conflicts that would come to dominate the international agenda. 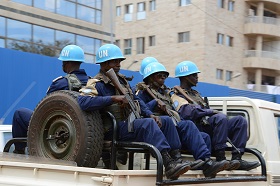 The end of the Cold War, the gradual unblocking of the UN, and the general euphoria about the Organization caused a veritable surge in peacekeeping. If in 1956-1988 the UN fielded 10 missions, after 1988 it established more than 50. It was obvious, however, that the context had changed, and that traditional peacekeeping operations deployed in inter-state conflicts after a ceasefire and in support of an already negotiated settlement had to make way for something else.

From Peacekeeping to Peacebuilding

In the brave new post-bipolar world conflicts used to be (and remain now) predominantly intra-state, with ethnic, religious, and sectarian overtones, fought not only by regular armies but also non-state armed groups against the backdrop of state collapse. These new and complex realities provoked much soul-searching about the future of peacekeeping and led to significant reform.

Peacekeeping operations have become more complex – in structure, tasks they carry out, mandates they receive, and technologies they use. The changing nature of UNPK was first outlined by UNSG Boutros Boutros-Ghali in his landmark 1992 “Agenda for Peace”. In the report he insisted that the UN needed to expand its toolkit of preventive diplomacy, peacemaking, and peacekeeping to include post-conflict peacebuilding, necessary to avoid relapse into conflict and to build ‘sustainable’ peace. Although the reality on the ground soon proved that these mechanisms or elements thereof overlapped and were often pursued simultaneously, new missions—now called ‘multidimensional’–went above and beyond traditional peacekeeping. 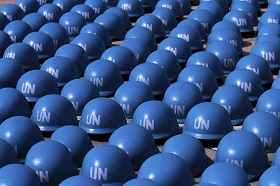 www.lowyinterpreter.org
Aslan Abashidze, Denis Vidineyev:
Who Sends Peacekeepers and How?

Modern multidimensional UNPK operations no longer simply observe and monitor ceasefire lines. In most conflict zones there are no clear borders or frontlines to speak of, nor are threats and challenges to peace concentrated in any single geographical location. Instead, the problems are societal. The root causes of conflict are political, economic, social. Peacekeepers are thus expected to build up state capacity, help it provide security and maintain public order, to strengthen the rule of law and foster respect for human rights, encourage political participation, support the emergence of legitimate political institutions, promote economic recovery, development, as well as resettlement or return of refugees and internally displaced persons (IDPs). In practical terms this translates into many kinds of programs ranging from Disarmament, demobilization, and reintegration activities (DDR) through which former combatants are provided with livelihoods and, at least in theory, become contributing members of society, Security Sector Reform (SSR), which seeks to rebuild military, police, and justice institutions, to holding elections and getting rid of landmines. MONUSCO, the UN mission in the Democratic Republic of the Congo (DRC) and the biggest currently in existence, is an illustrative example of a complex UN operation. With 22,016 personnel in the field, large military, political, and humanitarian components, it is a vast long-term undertaking.

In addition to new tasks, UNPK developed new rules of engagement, began to receive broader mandates, and to play unprecedented roles. From its earliest missions, the UN has tried to adhere to the so-called ‘holy trinity’ of peacekeeping principles: consent of the parties to the conflict, impartiality, and non-use of force except in self-defence. Far from being arbitrary, these unwritten principles came to be enshrined in numerous UN Security Council (UNSC) resolutions and helped establish the Organization as a legitimate, credible, impartial broker and a force for peace. Without consent, unless action was sanctioned by the UNSC and qualified as peace enforcement, the UN risked infringing on state sovereignty. Without impartiality, the mission could become a party to the conflict placing the lives of peacekeepers at risk while foregoing its original purpose – creating conditions for peace. 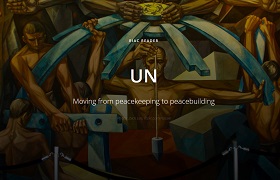 After the Cold War, however, peacekeepers were deployed in areas, such as Somalia or Bosnia, where there was no peace to keep, and it was up to the UN to create it. Failure of the Organization to stop atrocities like the 1994 genocide in Rwanda and the 1995 Srebrenica massacre in Bosnia led the UN Secretariat and the member-states to review UNPK. Many UN missions came to be mandated to protect civilians and in early 2000s, largely because of the seminal ‘Brahimi Report’, it was agreed that in some cases both use of force and impartiality required a broader interpretation. The result came to be known as ‘robust’ peacekeeping, explicitly permitted to use “all necessary means” to fulfill the mandate, including preventive use of force at the tactical level. Impartiality, in turn, was construed not as neutrality or equal treatment of all parties at all times, but as impartiality of the terms of the mandate. These new developments cast doubt on the principle of consent as well – if before the UN required the consent of states, was it now supposed to seek consent of non-state parties to the conflict as well or just that of the government? Knowing where to draw the line in all of these cases has been extremely difficult and remains controversial. While some see Protection of Civilians (PoC) mandates as necessary and imperative, others preach caution and insist that PoC elements should not be automatically made part of every mandate as this may compromise the mission’s legitimacy as an impartial actor. The ‘robust’ use of force by peacekeepers also tends to draw criticism from member-states and usually for the same reasons.

The Emerging Geopolitics of Peacekeeping 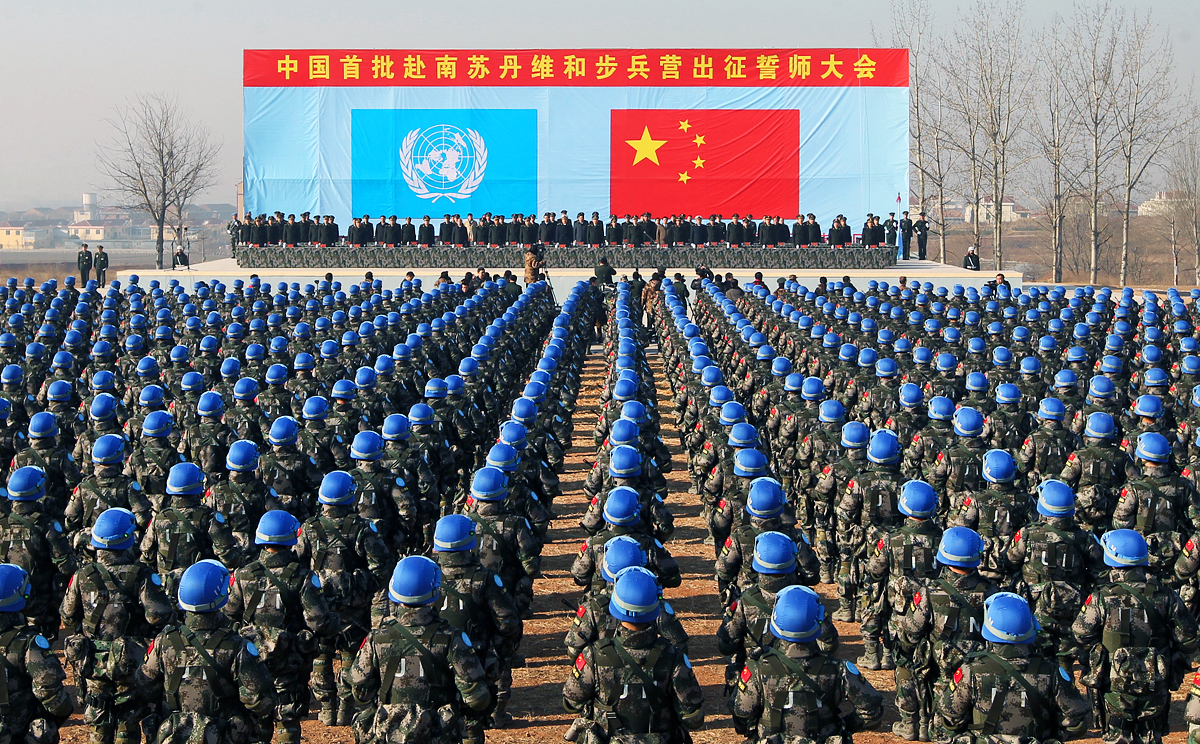 Xinhua / www.scmp.com
Chinese peacekeepers parade ahead of their
deployment to South Sudan

Beyond conflict management, UN peacekeeping also remains an important instrument of foreign policy. In this regard, it is interesting to look at China and its recent engagement with UNPK. Although historically China tended to focus on other aspects of UN work, in recent years it has exhibited immense interest – to a point where with 2,639 total personnel serving with the UN, it is now the largest troop-contributor of all 5 UNSC permanent members. In 2015, the President of the PRC Xi Jinping pledged 8,000 more Chinese troops to become part of the UN peacekeeping standby force. Through UNPK China pursues multiple objectives. Participating in peace operations helps improve a country’s international image as a responsible and peace-seeking member of the international community, field missions provide troops with real-world practice and valuable military experience. 9 out of 16 UN peacekeeping missions are in Africa where China has for years been trying to insert itself as a friendly power and economic partner. Thus peacekeeping allows PRC to strengthen its relationships with African countries, lend assistance to friendly governments (perhaps in exchange for future support for Chinese resolutions and initiatives at the UN), and protect its economic interests.

Most troops usually come from the developing world. As a consequence, peacekeepers tend to be less skilled and prepared for their duties, which at times leads to various abuses (including sexual abuse), and peacekeepers in general failing to uphold the necessary humanitarian standards thereby damaging the image and the credibility of the mission and of the Organization.

That said, China is only a piece of a broader global geopolitical pattern reflected by a particular division of labour within UN peacekeeping. Wealthier countries, like the United States, France, Japan, and Germany tend to contribute the most in terms of funding, but rarely if ever send their troops to directly participate in the operations. Most troops usually come from the developing world. As a consequence, peacekeepers tend to be less skilled and prepared for their duties, which at times leads to various abuses (including sexual abuse), and peacekeepers in general failing to uphold the necessary humanitarian standards thereby damaging the image and the credibility of the mission and of the Organization. While this is certainly an issue of having peacekeepers accountable, it is also part of a broader problem of a global discrepancy in UNPK participation between the developed and the developing countries.

Conflicts evolve, and with them do the demands of UN peacekeeping: to protect civilians, to rebuild fragile states and to reconcile former combatants. In all of this, the UN has proven itself to be indispensable, but expectations have tended to be too high, and so we must be careful not to ask too much of it nor to blame the UN for everything under the sun. Ultimately, UN peacekeeping has gone a long way from humble beginnings to a well-established institution of the international community. And now as then, it remains a work-in-progress.