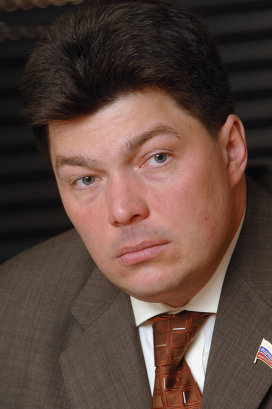 Graduated from the Institute of Asia and Africa at Lomonosov Moscow State University. Holds a Ph.D. degree in Political Sciences.

Worked as interpreter/translator at the International Department of the Central Committee of CPSU. Taught Arabic at the Higher School of the KGB. Was leading editor of the Arab department of TASS and project coordinator at Video International.

In 1997–1998, was head of the Public Relations Directorate in Boris Yeltsin’s administration.

Head of counselors and administration of the Chairman of the RF State Customs Committee.

In 2000–2014, was member of the Federation Council of the RF Federal Assembly, representing the Pskov Region; Chairman of the Committee on International Affairs.

Vice-Speaker of the Parliamentary Assembly of the Council of Europe. President of the Russian Society of Solidarity and Cooperation with nations of Asia and Africa.

Member of the Council on Foreign and Defense Policy. Colonel of the Customs Service. RF state counselor, 1st class.