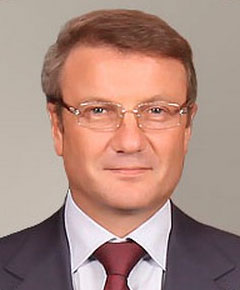 Graduated from the college of Law of Omsk State University. Holds a Ph.D. degree in Economics.

Began his professional career in St Petersburg, working his way from being a rank-and-file law consultant for the Committee of Economic Development and Property of the Petrodvorets administration (1991) to an appointment as the vice-governor of the northern capital, as well as a member of the BOD of JSC Lenenergo (1997). Went on to become the Deputy Minister of State Property, and to head the Center for Strategic Research.

From 2000 to 2007, served as the Minister of Economic Development and Trade of the Russian Federation.

During various periods of his career, was member of the BODs of several large state companies such as Gazprom, Transneft and Lukoil.

Recipient of state of awards from Russia and France.