Russia-India Gape May Be Widened Further

For the first time in the last two decades, India and Russia have not held their annual summit. Moscow communicated severe concerns on New Delhi joining the Indo-Pacific initiative and Quad, thereby leaning more towards the US. India and Russia have been holding the annual summit, which is the uppermost institutionalized dialogue instrument in the strategic partnership, since 2000 when the 'Declaration on the India-Russia Strategic Partnership' was engaged between both sides.

However, this is the first such year when in spite of several high-level visits from New Delhi to Moscow, tensions have begun to simmer in the bilateral ties over Russia's rhetoric against India's increasing alignment with the US. 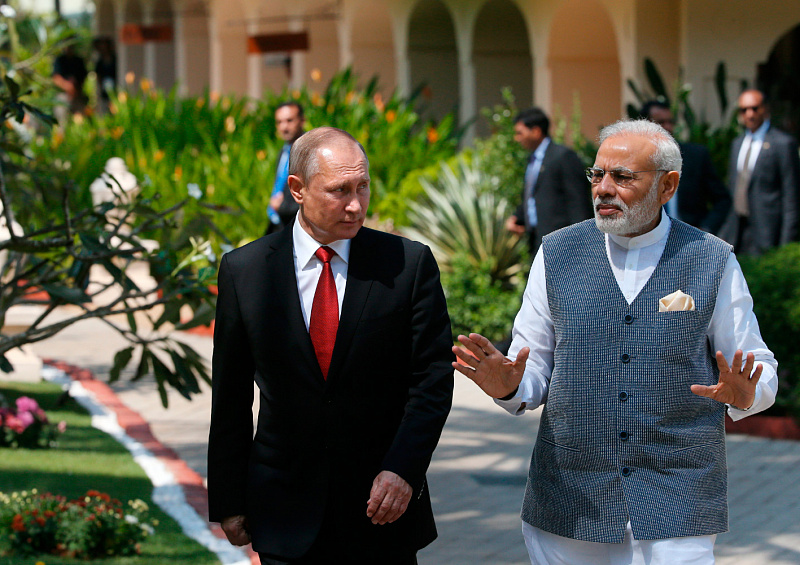 The two-sided ties between India and Russia were upgraded to 'Special and Privileged Strategic Partnership' from 'Strategic Partnership' in December 2010 during Russian President Vladimir Putin's visit to India. However, there is some discontent over Russia's repeated comments on India and casting aspersions over New Delhi's decision to join the Quad and tilting excessively toward the US.

In fact, India used the anti-China card in the 1960s, when Sino-Russian relations sored, to get closer to Russia. India developed a very close association, being an anti-China ally with Russia, and gained many favors, including economic assistance, trade cncerssions, technology transfers, and defense dependency, especially in the Defense Industry. India taped milk out of Russia as long as, as much as, it can. When felt that after the disintegration of the former USSR, Russian could not be beneficial to India anymore, India turned its face. It started looking toward the Western world, especially the US. India spent the amount of money and used US politicians, Senators, Congressmen, Media, etc., for lobbying to promote the Indian narrative in the US government. Gradually, India succeeded in convincing the US-administration to get recognition as an essential ally.

India used an anti-China card for the second time when the rift started between the US and China under President Trump's administration and established close contact with the US. Inia signed the agreement as Majorr Defense Partner, and four defense pacts are considered very sensitively and strategic in nature. India gained trade concessions, market access, visa relaxations from the US, access to American R&D institutions, transfer of technology, and access to advanced technologies, including defense technologies and modern weaponry systems. Inda enjoyed American diplomatic and political support and became the second-largest beneficiary of American favors just after Israel's state.

By joining Quad or Asia-Pacific Alliance, Japan, Australia, America, and India, India is entirely in the American block, which is against China – a close ally of Russia and Pakistan. Although India is a member of SCO and BRICS, yet opposing BRI and China is self-contradictory. Many member states in SCO believes India may become a security risk for SCO and leaks internal sensitive information to America. Indian role in SCO is doubtful already.

India had milked the former USSR in the past, and milking the US currently, and may turn its face if the US is no longer beneficial for him anymore. It is a typical opportunist approach and may not live long. India can not fool the superpowers for long.

It is very much visible that China, Russia, Pakistan, Turkey, and Iran are emerging a new alliance and future region. India may face further isolation in the region.