For hundreds of years, the Eastern Roman Empire, also known as Byzantium, protected Western Europe by default from Arab and then Turkish Moslem invasions, although the Jihadists managed to slither around Constantinople and reach Spain and France, before their expulsion, along with the Jews, from Spain in 1492. The Turkish Ottomans were happy to welcome the Jews to their empire. Since then, Zionists and Turks have had a generally good understanding, whatever Erdogan’s pro-Palestinian rhetoric. For example, Israel and Turkey are both vehemently opposed to Assad. 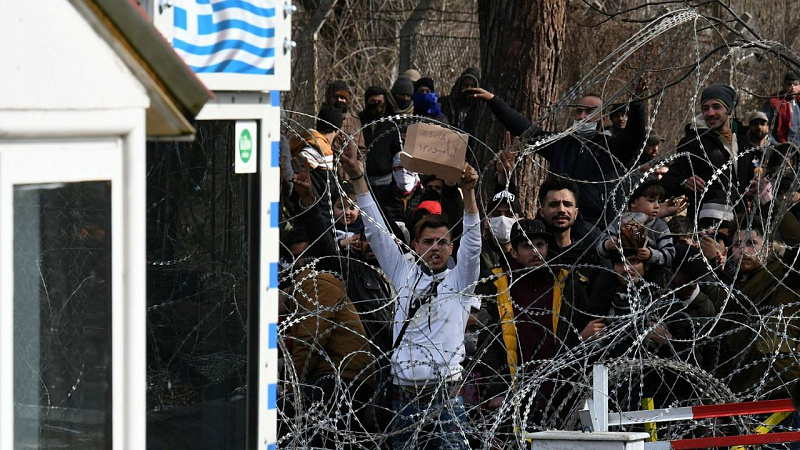 Despite Christian Europe being under attack from Moslem Turks, this had not prevented the allegedly Christian crusaders from exploiting a dynastic squabble in Constantinople to destroy Constantinople and take over most of the Eastern Roman Empire in 1204. It was not until 1261, at the Battle of Pelagonia, that Greeks won back some pride, as well as Constantinople. But when the Turks took Constantinople in 1453, the Europeans did little to help. Only Italians, in the shape of Venetian and Genoese ships, and General Giustiniani, offered any substantive help. The West Europeans got their just deserts for their selfishness, with the Moslems even reaching Vienna in 1681.

Fast forward to today: although there are obvious various differences, we are seeing the same geohistorical tendencies as I write: thousands of Moslems are invading Greece and destroying its way of life on some of her most beautiful islands, all orchestrated by a neo-Ottoman panjandrum, who some think is blackmailing the EU, while the latter is offering only minimal help, having already hit Greece through extremely harsh economic measures that have left the country weakened, and devoid of many of its best young brains. Even if the corruption of a clientelistic Greek leadership has contributed to Greece’s woes (shades of 1204), the spectre of aggressive Turkish and vehemently Moslem hordes assaulting Greece and Europe is with us again, albeit in different colours, demonstrating yet again the danger of not heeding history: atavism rules.

Another parallel is the rôle of Russia: just as Russia defended its interests to the South against the Turks from the Sixteenth Century onwards, so she is currently doing, through a mixture of diplomacy and force. And just as Sixteenth Century France helped the Turks, today it is the Americans.

Is it safe to predict? In such a currently volatile situation, we need, again, to turn back: when the Ottoman Empire began to coagulate in the Eighteenth Century, she was supported by the Austro-Hungarian and British Empires, largely because of their irrational gear of Russia. Today, it is the US and Britain who have replaced them. Just as London and Vienna helped to keep the Ottomans on life support, so London and Washington are doing today.

The big question is whether they will continue to support a coagulating but highly aggressive Turkey, whether in Syria (Turkey is to a considerable extent responsible for the Syrian civil war, along with the anti-Russian West) or elsewhere. If they do, and if the EU does not act incisively to help Greece, then the latter will be experiencing a dire future. And Russia will not feel obliged to help its natural historical pre-independence friend, given that then latter is currently reverting to a Cold War Truman Doctrine stance.