The "Brain Drain" in Ukraine, which no one is Talking About

Print
Ukraine has another crisis facing it and it is one which is not, so far being mentioned, as far as I can determine in any of the various (and many) media outlets and it is a crisis, which, I suggest, is no less serious than the one's facing it right now.

The only difference being that this is a crisis just waiting in the wings, somewhere further up the track: for the train to hit the buffers sometime within say the next five to ten years. And, when it does eventually hit - it is going to hit those buffers very hard, indeed.

As an English language teacher, who offers on-line ESL lessons and assists with people wishing to enter into the UK's higher educational establishments, I have noticed an up-tick in prospective new clients, who are coming to me from Ukraine - from both sides of the East/West Ukrainian divide.

They are coming to me, moreover, with the express purpose of taking the Cambridge IELTS Academic tests; for the sole purpose of gaining entry into the UK's, higher educational establishments and for advice/mentoring in how to adapt to the "British way of life." Meaning that these people have absolutely no intention of returning back home any time soon. 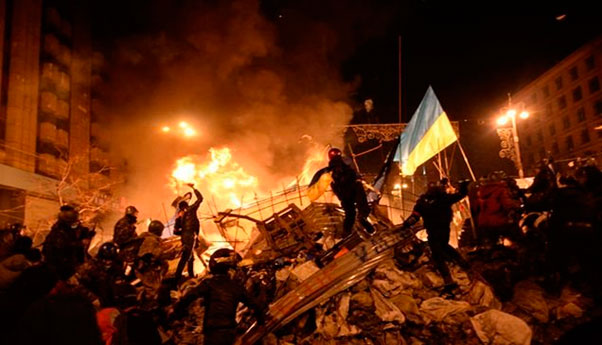 Therefore, my Conclusion is Thus

There is an endemic haemorrhaging of young people, packing their bags and abandoning Ukraine...abandoning Ukraine this time around, however, forever. They are having to make tough choices and truly costly, radical changes to their lives. But, one thing to me is now crystal clear...they are doing it and, for these people who are doing it...there shall be no turning back.

The young people I am now working with - from all parts of Ukraine, are bright, energetic, highly-motivated and, above all...extremely intellectual. Their average age range is between eighteen to twenty-five.

These are the very young people Ukraine is going to need, to drive that country forward and head up its flagging economic infrastructure - one day taking over the reins perhaps? But guess what...??? They are not going to be there, when eventually that day comes along.

The Future Outlook for Education in Ukraine

As far as I can, so far determine, the outlook Ukraine is one of a country, which is going to be left in a perpetual and cyclonic vacuum, of an ageing population and minus its potentially new generation of entrepreneurs; as a direct result of its haemorrhaging of young, bright, motivated and gifted people. And, that day of reckoning is starting right now.

Could this Outlook Scenario Be Rectified?

Currently I see no real infrastructures being put in place to rectify this situation. Nor have I heard or read about any meaningful dialogue to address this scenario. Nor have I witnessed any 'concrete' political will, to stabilise this situation.

Certainly it is, it would appear, not being discussed - either by the EU, the US and the Ukrainian authorities. Rather, it appears that this topic has been conveniently glossed over, within the bigger picture of things. This topic seems to have been swept under the carpet, if you will.

Logically-speaking, of course it could be rectified, but the action(s) needed to arrest this brain-drain need to be implemented, by the incumbent Ukrainian government as a matter of urgency.  President Poroshenko really needs to be getting to grips with it.

There needs to be signs of solid investment going into the educational, development infrastructure and a clear road map of as to how that shall be achieved and disbursed. There needs to be a radical overhaul of the educational budget. The salaries of qualified and experienced, professors need to be increased; in order to attract the right type of quality professors and academics, in their respective fields.

Finally, last, but by no means least, the older, Soviet-style buildings themselves need to be radically modernised and that also demands inward investment of not minor sums of money. New equipment needs to be installed and the older buildings, as I have just mentioned, updated and even new campuses created.