U.S Democratic Presidential Debates: What did the Candidates say about Foreign Policy and Russia?

On June 26th and 27th of 2019, 20 presidential hopefuls of the Democratic party, in two groups of 10, debated each other on a variety of issues impacting the United States of America, from climate change to immigration to health care. Unsurprisingly, foreign policy was also mentioned in parts of the debate, as the new president would serve as commander-in-chief of the United States military. While it is still uncertain which party, let alone candidate, will win the presidency in 2020, Russia remains a big subject of discussion in US politics. 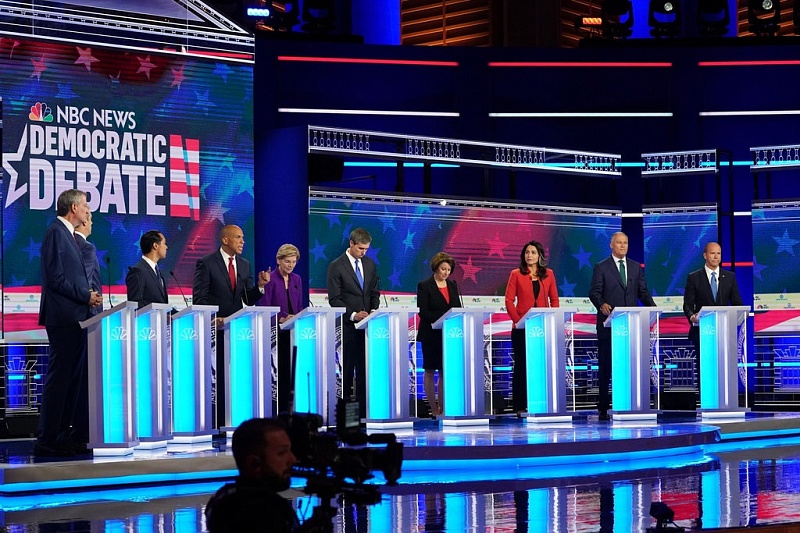 This paper will go through the transcripts of the Democratic Presidential Debates on Night 1 and Night 2 for any mentions of Russia or related topics in foreign policy. All quotes in the text are taken from the transcripts.

It is important to note that the word “Russia” was mentioned a total of 4 times in this debate. Considering how much of a problem Russia has been for America, that is not many mentions of Russia at all. In fact, foreign policy was not a topic in the debates until almost halfway into the debates, reflecting how many issues the country faces within its own borders. The first question regarding foreign policy was regarding the U.S – Iran nuclear deal in 2015. The “question” asked for a “show of hands who as president would sign on to the 2015 nuclear deal as it was originally negotiated”. New Jersey senator Cory Booker did not raise his hand, indicating he would not sign on to the deal again, reasoning that he wants to leverage a better deal. He stated in his response, “Literally, he took us out of the deal that gave us transparency into their nuclear program and push back a nuclear breakout 10—20 years.” This statement deserves a closer look, as it indicates a harsh nature of politics: the inability to fix issues permanently. Booker himself states that Iran’s nuclear program was pushed back 10-20 years. Then another deal would need to be made, and this cycle would repeat.

On this question we see the first mention of Russia. Amy Klobuchar, a senator from Minnesota, states that she will negotiate the US back into the agreement and not give “unlimited leverage” to China and Russia. Although she was not able to finish her statement, it is easy to assume that she refers to the soft approach that Donald Trump has had on Russia. Klobuchar, as well as many other politicians, speak of securing America’s democracy from attacks like Russia’s interference in the 2016 elections. However, other than summoning Mark Zuckerburg of Facebook to discuss Facebook’s influence on the election and Russian influence on Facebook’s feed, these statements have only served as rhetoric and not much policy-wise.

Speaking of interference in the elections, the second mention of Russia, coming long after the question on Iran, is a direct statement by Beto O’Rourke, former congressman from Texas. The question posed to him was “Do we (America) have a responsibility to intervene, to protect people threatened by their governments even when atrocities do not affect American core interests?” O’Rourke responded with the notion that Trump has made America weaker, and that America was not able to confront “Putin in Russia who attacked and invaded our democracy in 2016 and who President Trump has offered another invitation to do the same.” Once more do we see such strong rhetoric against Russia and Putin without any policy recommendations.

Then comes a simple but loaded question regarding foreign policy: “what is the biggest geopolitical threat to the United States?” Of the 10 candidates on the stage, 3 mentioned nuclear proliferation directly, 4 mentioned China, 4 mentioned climate change, and 1, Mayor De Blasio of New York City, mentioned Russia. Some candidates mentioned multiple areas of concern in response to the question, which is why the numbers in the previous sentence will not add up to 10. In his response, Blasio states, “Russia because they’re trying to undermine our democracy and they’ve been doing a pretty damn good job of it and we need to stop them.” More rhetoric and no policy. It is also important to note the candidates who say China as opposed to how many say Russia, portraying China’s global influence as greater than Russia’s.

The fourth and final mention of Russia is by Senator Klobuchar, who is not given time to finish her statement. Nevertheless, her statement would probably have been against Russian interference and for action regarding controlling America’s elections better. No candidate’s closing statement involved foreign policy.

The second night of the debates also saw Russia being mentioned a total of 4 times. Once again, foreign policy was not a topic in the debate until almost halfway. The question directly referenced the previous debate’s question about the single greatest geopolitical threat to the United States. The question, addressed to Michael Bennet, senator from Colorado, was, “how would you stand up to China?” He starts off his response with the claim that “first of all, the biggest—the biggest threat to our national security right now is Russia, not China.” Despite this claim, he goes right on about China, rather than expanding on his view of Russia as the biggest national security threat. Moments later, Andrew Yang, an entrepreneur and now presidential candidate, agrees with Bennet that Russia is the biggest geopolitical threat, citing that “they’ve been hacking our democracy successfully. They’ve been laughing their asses off about it for the last couple of years and we should focus on that before we start worrying about other threats.” He then proceeds to directly contradict his own words that America should focus on Russia before other threats, by not elaborating and moving right onto China, the “other threats” that he mentioned previously. He would later contradict himself again.

Later in the debate, a question about reversing the damage done to the reputation of America is asked to Bennet. He starts off by saying that democracy must be restored in America, and soon criticizes Trump for attacking allies at the G20 summit in Osaka while not mentioning North Korea and Russia. The moderator then takes the opportunity to ask every candidate, “What is the first relationship you would like to reset as president?” 2 candidates mention NATO, 1 mentions the UN, 2 mention European Allies, and 2 mention China. It is worth noting here that while Andrew Yang himself suggested focusing on Russia before other threats, he was one of the candidates mentioning China, once again contradicting his words. 1 candidate, Eric Swalwell, a congressman from California, mentions Russia, saying “My first act in foreign policy we are breaking up with Russia and making up with NATO.” This statement brings forth a different question right away: If he would break up with Russia, when did we ever make up? He could be referring to the Reset policy by the Obama administration in 2008 after Russia’s actions in Georgia, but that was over a decade ago, and that policy was deemed a failure by the time Putin became President again in 2012. It is interesting that he would think improving relations between Russia and the U.S. would involve breaking up with Russia and not making up with them over issues where there is a consensus. Diplomacy by breaking relations seems counterintuitive, as countries need to work together in the 21st century, not apart.

Even prior to the debates, there have been many calls and strong rhetoric against Russia’s actions from Democratic candidates, but without much policy recommendations. If this continues, there will not be any progress in U.S – Russia relations. Given that this was a debate, there clearly was not enough time for candidates to provide more substance on their statements. However, their campaign websites and their previous statements seem to be simply talking points and have not yielded too much substance, which makes relations between the two countries unlikely to change substantially in the future. Another observation is that America already faces many issues within its borders, from taxes to health care, which is why foreign policy does not seem to be much of a priority in the debates. If candidates are serious about quashing the Russian threats to American democracy, they must provide more than what needs to be done, but how it can be done.