Located in the Earth’s northernmost region, the Arctic is characterized by its frigid temperatures, expansive sea ice sheets, and barren tundra settings. The Arctic remains largely uninhabitable, apart from a collection of indigenous individuals sparsely scattered throughout the region. U.S. policy defines the Arctic as a geographic area, encompassing all land and oceanic bodies, located north of the Arctic Circle, 66.5 degrees N latitude. 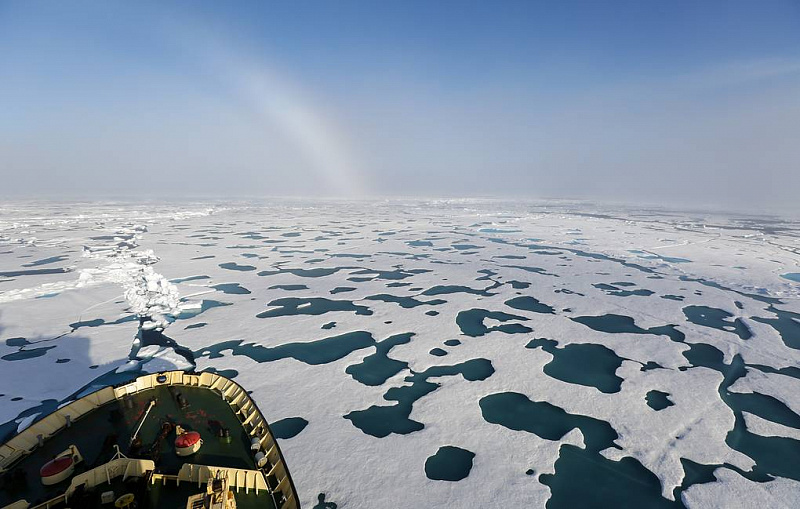 Despite the Arctic’s peaceful and unscathed qualities, the region has become central to international activity among nations. Climate change is rapidly transforming the Arctic environment, as global warming temperatures have led the Arctic sea ice to decline at a rate of 13.1% per decade. With a repeal in covering ice caps, opened areas of water reveal vast levels of untapped resources and oil reserves. It’s estimated that the Arctic contains 90 billion barrels of oil (5.9% of world oil reserves), 1,669 trillion cubic feet of natural gas (24.3% of the world’s reserves), and a plethora of metals and minerals. The energy resource revelation and its increased accessibility in the Arctic have generated strong economic interests among great powers and other peripheral nations. Besides, global warming in the Arctic has different implications, such as launching new transit and logistical routes. By the mid-century, it can be estimated that the Arctic’s receding ice coverage will open up a “Transpolar Passage,” as distinct from the Northern Sea Route (NSR), which will allow maritime activity to flow straight through the Arctic, drastically cutting down on travel time. Given the Arctic’s increased geopolitical importance in the past two decades, and due to climate change and globalization, world nations have responded with rapid mobilization of resources and efforts.

Eight countries currently hold shoreline along the Arctic: the United States (through Alaska), Russia, Canada, Denmark, Finland, Iceland, Norway, and Sweden. The Russian Federation holds the longest stretch of border to the Arctic, with 24,140 kilometers of coastline. The region also harbors institutions that help facilitate governance. These include the Arctic Council and the Arctic Coast Guard Forum, responsible for environmental sustainability, indigenous community support, and emergency response. While these institutions are primarily operated by the eight surrounding countries, outside interests have trickled into the Arctic arena as well. In 2019, China declared itself as a “near-Arctic state.” Beijing has increased efforts to expand upon its global infrastructure plan—the Belt and Road Initiative—well into the Arctic, in hopes of spurring economic development. The growing Arctic presence of great powers, such as China, the U.S., and Russia, has also produced a fixture of security issues and attested to a stronger military presence.

A key element to the allocation of Arctic territory resides within the 1982 UN Convention of Law of the Sea (UNCLOS), which grants each coastal country an exclusive economic zone (EEZ) extending 200 nautical miles from shore. Despite the legal framework of UNCLOS, territorial disputes still emerge. Arguments range from the U.S. disputing Russia’s declaration of the Northern Sea Route (NSR) above Siberia being Russian waters or the multi-state quarrel over who asserts sovereignty of the Lomonosov Ridge. Beyond the allotted 200 nautical miles of UNCLOS is referred to as the ‘donut hole’, which is a segment of untouched waters and land at the northern tip of the Arctic and yet another example of a territorial dispute in the Arctic. Countries like China have pressed to gain influence over the ‘donut hole’ and its immense logistical significance to international trade.

Arctic border nation’s strategic importance to the region has paved the way for an escalation of military forces, particularly with the U.S., China, and Russia. In the past decade, the U.S. has aimed to bolster its military to adapt to the region’s evolving geopolitical interests and great-power presence. America’s 2019 Arctic Strategy provides for the enhancement in joint exercises and military personnel in conjunction with NATO and the North American Aerospace Command (NORAD). In 2018, the U.S. and its NATO allies performed their largest military exercise in decades, known as the NATO Trident Juncture‚ involving 50,000 troops, 150 aircraft, 65 ships, and 10,000 vehicles. Western nations are expected to continue to establish a military presence in the region, while working collectively to boost their strength.

Currently, Russia has the most considerable military presence in the Arctic. The Kremlin just recently deployed new state-of-the-art icebreaker ships, Viktor Chernomyrdin and Arktika, to work in unison with its air and naval bases located across its extensive border. Russia has also implemented impressive air defense systems, such as the Bastion-P and Pantsir-S1 systems, to augment Russia’s defense against aerial, maritime, or land threats into the Arctic. Offensive capabilities are expressed through Russia’s Northern Fleet, capable of launching hypersonic cruise missiles and rapid sea-based operations.

China’s controversial footprint in the Arctic stems from the belief that Beijing is inherently entitled to economic access to the region through the UN Convention on Law of the Sea. All China’s initiatives in the area, such as conducting scientific research and improving maritime passage (via the Belt and Road Initiative), essentially predate the need to deploy military forces. China’s deployment of military forces can also be backed by their “Vision for Maritime Cooperation under the Belt and Road Initiative” report, stressing the need for law enforcement for maritime activities. Therefore, China’s military expansion is inevitable, given the country’s sovereignty to pursue further maritime activity in the Arctic.

The majority of recent reports on the Arctic focus on the possibility of a “New Cold War.” In the past decade, the upsurge of military forces as well as the Arctic’ growing geopolitical dimensions raise historical notions of the Cold War— a period of disastrous relations between the Soviet Union and the United States, with consequential geopolitical tensions. Media outlets and the corresponding nations mustn’t frame the situation in the Arctic as the Cold War of the 21st century, as this would have grave consequences for international relations. The U.S. and Russia are mainly at jeopardy here, and they must focus on what matters most. Scientific research is an avenue on which the two countries can collaborate effectively on. Given the Arctic’s lesser-known attributes and largely untouched environment, the region is perfect for scientists and members of the academic community in the U.S. and Russia to study collectively. As mentioned, climate change heavily affects the region, with ice caps receding at 13% each decade. The U.S. and Russia should promote sustainability in the Arctic and limit further melting with respect to the human Arctic population and the region’s ecosystem.

The neighboring Arctic nations should also promote international law, using institution-backed regulations and resorting to the language of diplomacy. For example, institutions need to incorporate security issues into their discussions, as many of the existing Arctic institutions fail to address them. One Arctic institution that does address rising security topics is the Arctic Security Forces Roundtable, which fails to include Russia in its discussions, though. Russia must be reckoned with in security conversations with other countries, as the country retains the largest military presence of the Arctic. The Arctic nations must utilize institutions as a means of governance and encompass every country active in the region to avoid potential border or territory conflicts.

Besides, the U.S. and Russia could work closely to deter China from its far-reaching expansion into the Arctic. While China may claim to be a “near-Arctic state,” they share no boundary with the Arctic region, making their economic ambitions highly-suspect. Through American and Russian efforts, the two countries could hinder China’s controversial aspirations in the Arctic, and, by doing so, significantly decrease the chance of a great power conflict there.

As global warming and globalization show no signs of slowing down, we must take the Arctic region into account as well as the growing list of its implications for international affairs. Rather than the region being a point of geopolitical tension, it could be an area of cooperation between the U.S., Russia, and the surrounding states. Attaining a solidified and collective security plan among all participating nations is the first priority to achieve a cooperative Arctic region, followed by close collaboration for environment sustainability, scientific research, and diplomatic talks.

Policy Analyst at Ru-PAC, Student at the University of Virginia