"Covid-19" and Problematic Relationship Between Economy and Labor Market 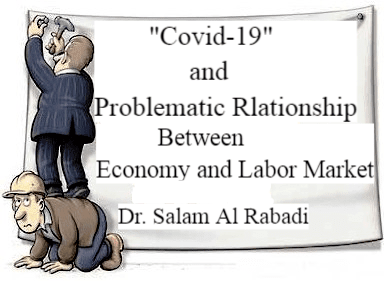 According to International Labor Organization (ILO) reports, the Covid-19 pandemic has caused severe damage to the work sector, with more than 250 million jobs lost, not to mention the negative impact of the pandemic in terms of slowing or reversing the trend of rising wages around the world, which affected low-wage earners1. In addition to the increasing inequality between the rich and the poor and the increase in the poverty rate.Thus, it must be recognized that the current economic developments and the free trade growth process are still growing far away from the labor market, and have a negative impact on the level of equality and social justice. In this context, it must be noted the basic problematic in the modern world on a level relationship between sustainable development and economic growth are the problematic of the gap between the rich and the poor. So, we must ask:

Facts based on public interest remain the primary criterion for evaluating successful economic policy. Therefore, far from theorizing and according to the statistics and data on the economic gap, and if we take into account that the largest proportion of citizens are workers or employees working for wages, we can say that the economy no longer works for the benefit of societies. As it has become clear, the gap between entrepreneurs and wealthy individuals on the one hand and workers' salaries on the other hand, will increase doubts about the safety of society. Accordingly, if freedom of trade and the movement of capital are what secures growth and prosperity, and if the goals of the World Trade Organization (based on competition, abolishing quantitative restrictions, unifying all fees and making the world a free trade zone), here it is necessary to ask:

Are these policies and objectives will lead to a deepening of the labor market crisis? Or is it will serve as a point of change and positive transformation?

It has become logical to say that these goals in the first place increased the intensity of competition between countries (whether industrial or developing), which inevitably led to disastrous results in terms of high rates of wage and salary cuts and the erosion of their purchasing value. As all the efforts made by politicians and economists to find alternatives to lost job opportunities in all sectors did not achieve the desired results. The more free the pace of commercial growth (in goods and services), the greater the difficulties at the level of the labor market, where there is a reduction and rationalization that leads to the loss of value of human labor. In this context, it must be noted that there was no real globalization with regard to the labor market.

Consequently, many of the policies pursued did not lead to an increase in the well-being of societies, but rather worsened the stagnation of the social situation and the gap between the rich and the poor.

For example, a decrease in wages in commodity prices is reflected positively in the first place( and directly) on the rich or high-income consumer, who has not lost anything of his income as a result of reducing the cost of production. In contrast, it is the middle and lower classes that lose a large part of their income and are therefore negatively affected the most. Accordingly, and according to the economic repercussions of the "Covid-19" pandemic, it is currently impossible to avoid and ignore research into a dilemma:

Who bears the economic burden more: capital or workers?

Based on the axioms of current economic policies, it is logical to say that governments increase the tax burden on the labor sector. Also, tax exemptions and facilities provided by governments to transnational corporations lead to a decrease in the state's financial revenues, which they will compensate by increasing taxes on other social classes, or by reducing social services and health care.

As it is not entirely surprising that we know that there is a high speed in the provision of funds in order to find a solution to any global financial and economic crisis compared to the fact that there is extreme caution and stinginess when it comes to financing humanitarian programs that related to lifting the less fortunate (deprived and marginalized) communities from poverty and destitution. For example, only we need to tens of billions annually to eradicate hunger and malnutrition in the whole world. And the United Nations has endorsed several different programs to achieve this goal. But this programs still on paper only due to lack of availability of the necessary funds. Therefore, all economic and political solutions related to the challenges of the "Covid 19" pandemic must be based, to the utmost degree, on the ability to support all policies related to safeguarding the interests of the working class and the poor. Where the central issue must be based on the logical criticism of the actual existence of poverty and inequality, whether at the global or local level.

These tragic facts (away from the ideological dimensions in study and evaluation of the global economy) put us in front of the dialectical next logical question: Is the problem lies in the strategic priorities and options to states? Or Is it, in fact, the problem of the actual possibilities available to States?

To sum up, the possibility of achieving an actual renaissance that relieves the peoples of poverty and material impotence depends on the type of economic thought that should be pursued, as we need new visions that respond to the needs and capabilities of societies. Consequently, this requires directing an intellectual criticism of how to interact and deal with neo-economic liberalism, because it is no longer logical and acceptable to deal with this reality on ideological grounds only (whether for or against) without the existence of practical economic programs, where here it is necessary to confront a dialectical or problematic: