CAB-2019 or Citizenship Amendment Bill is one of those historic bills which will not only change British Colonial History from India like Removal of Article 370 and 35 A, Ram Lala Virajman Vs Sunni Waqf Board and few. It can easily be pointed out that Modi-Shah duo is all set to make history. 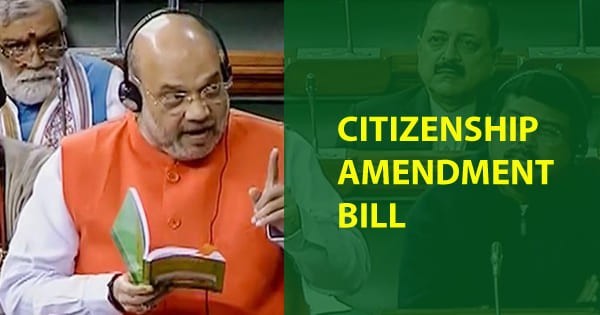 As a Journalist and Journalism Academic I studied CAB and the debate took place in Lower House(Lok Sabha) and Upper House (Rajya Sabha) . The leaders of opposition like Anand Sharma, P.Chidambaram,Kapil Sibbal,Gulam Nabi Azad called it black day of Indian history and said that two Nation Theory which divided India was not given by Congress. But its also true that Congress never Opposed strongly to two Nation Theory of Muslim League and Mohammad Ali Zinnah who advocated a separate country for Muslims in a post independent India. Even Mahtam Gandh,how ever never favored two nation theory but also never opposed it strongly. The two nation theory was strongly opposed by 'Sarhadi Gandhi' or 'Seemant Gandhi' or Khan Abdul Gaffar Khan of North Western Frontier Province now Dera Khair Makhtoom Khwah and Vinayak Damodar Savarkar or Veer Savarkar.

I have a report with me which is written by ex member of Pakistani Parliament Farahnaz Ispahani and former Journalist at Voice of America with the title "Cleansing Pakistan of Minorities" on July 31,2013. Its obvious that while writing this report in Pakistan she never had clue about what would happen in India in 2019 so this report may be considered an unbiased report written by a member of Pakistani Parliament.

I would highlight only seven points of this reports published on world famous Hudson Institute's website.

2- What happened to Christian graveyards in Karachi,Lahore,Islamabad and other places?

4- Why despite Zinnah's idealistic claim to be equal towards Nn Muslims,Ulemas,Maulvi's,Fundamentalists, took over dominantly in Pakistan Parliament and during election even when Zinnah was alive and in subsequent elections till now.

5-Why such belief are part of Pakistan Law that Islamist rejection of “non-Muslim” culture took the form of attempts to define a limited “Muslim” culture and limiting the freedom of non-Muslims and Muslims alike to embrace diversity. While non-Muslims were easily defined as “the other,” a struggle also started to determine who among Muslims were pure Muslims and who had allowed Persian or Indian culture and practices to taint their faith

6-Report says with porof that Pakistan’s non-Muslim minorities, particularly Sikhs and Hindus, were “cleansed” during the partition riots at the time of independence. Then why people and parties like Congress are opposing the bill?

7- And now reports sucker punch will shut those who are opposing the bill.The report further says,"There has been a steady decline in religious tolerance in Pakistan over the last 65 years. At the time of Pakistan’s birth and the partition of India in 1947, non-Muslim minorities comprised twenty-five percent of the new country’s population, whereas today they only comprise five percent. According to the last census in Pakistan which collected such data, conducted in 1998, Christians constitute 1.59 percent and Hindus 1.60 percent of Pakistan’s population. While much of the “cleansing of the population” took place in major events (partition, around the 1965 and 1971 wars), there has also been a steady rise in incidents involving attacks on both Christians and Hindus in the last decade.

Despite have thousands of pages of Data Indian Home Minister remained contained in both houses and answered all intentional questions with facts finally promising that Muslims will not be kept away from Citizenship even after this bill.

A Lucknow based Live Today News Channel asked my opinion on the issue and since I was given very less time to speak and attached Phone-In is truncated I thought to explain my point of view on this historic bill almost like other bills which Modi-Shah duo has brought in force.

Watch it also above.

OTHER RECORDS
What the US-Iran war might look like
Ratnesh Dwivedi
Indian Minister is Right When He Advocates Indian Discoveries
Ratnesh Dwivedi
Language of Urdu TV Channels in India and the Debate of Culture,Language and Aryans
Ratnesh Dwivedi
Tags
Citizenship Amendment Bill, India, Muslim, Pakistan