Relations between Abkhazia and Syria: Towards a Domino Effect with Belarus and North Korea?

Following Syria’s diplomatic recognition of Abkhazia in 2018, Abkhazia opened its embassy in Damascus in October 2020, attesting to the strengthening of relations between the two sides. For Abkhazia, a territory partially recognized by the international community and diplomatically supported by Russia, this recognition opens new perspectives for enhancing its military and economic relations with the Middle East. Furthermore, it attests to a progressive opening up of the territory, as it is now recognized by a growing number of countries, in contrast to others that are struggling to achieve the same results, such as Transnistria and Nagorno-Karabakh. 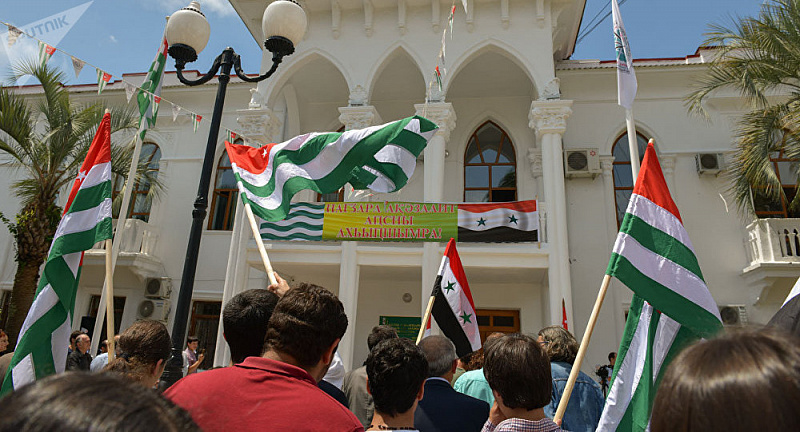 The future of Abkhazia remains questionable, and the Abkhazia-Syria relations are more of a diplomatic victory for Moscow than for Sukhum (the de facto capital of Abkhazia). Nevertheless, this diplomatic advance marks a turning point and raises new challenges, notably that of a domino effect and the recognition of Abkhazia by other countries allied to the Kremlin, notably by Belarus and by North Korea.

At the time of the break-up of the Soviet Union, the Autonomous Soviet Socialist Republic of Abkhazia, part of Soviet Georgia, became de facto independent and benefited from Moscow’s support to survive in a fast-changing post-Soviet space. Although reluctant to acknowledge this new country from 1992 to 2008, Moscow proclaimed the recognition of Abkhazia as a full-fledged country in 2008, in retaliation to the U.S. and some EU member states decision to recognize Kosovo.

As a result, the recognition of Abkhazia is rooted in the interests of the Kremlin rather than in respect for the Montevideo Convention, and the subsequent countries that recognize Abkhazia seem to do the same, wishing to show their support for Moscow rather than out of interest in Abkhazia.

Recognition by Nauru, Nicaragua, Venezuela, as well as unrecognized countries such as Transnistria followed, but all these states are of minor interest to the authorities in Sukhum, who, due to the location of Abkhazia, must continue to rely on neighboring Russia.

In this context, Syria’s recognition in 2018 marks a turning point as it ends an absence of recognition by new states since 2009 (Venezuela) and pushes Abkhaz authorities to consider the re-opening of the Sukhum International Airport.

The consequences of the Syrian recognition in 2018 are significant, and two other countries have begun a rapprochement with Abkhazia—North Korea and Belarus—in part because of the Syrian initiative.

Although Abkhazia does not necessarily wish to be recognized by North Korea, which would hamper its chances of gaining recognition by the Western world, relations between the two countries are growing, paralleling the Syria-North Korea relations.

In December 2017, the North Korean Chamber of Commerce contacted the then Abkhazian Prime Minister Gennadi Gagulia to discuss the possible settlement of North Korean workers in Abkhazia. Subsequently, an Abkhazian delegation visited Pyongyang (August 2018) and a North Korean delegation visited Sukhum (November 2018), thus strengthening the relationship between the two nations. According to the director of international affairs of the North Korean Chamber of Commerce, enterprises in the construction sector, food and textile industry, and logistics companies are interested in working with Abkhazia. In 2019, about 400 North Korean workers have settled in Abkhazia. This rapprochement suggests that recognition is increasingly likely.

Belarus has consistently refrained from recognizing the territory, claiming that it is of little economic interest. But recent tensions between the West and Lukashenko suggest that Minsk may recognize Abkhazia to satisfy the Kremlin’s demands and to allow Belarusian citizens to travel to Abkhazia more easily if they have limited travel options in the future. As such, a train connection between Minsk and Sukhum is possible, providing an alternative to international flights.

Recognition of Belarus is an option to consider, and it would follow a similar pattern to Syria, a few years after Damascus.

The growing number of countries recognizing Abkhazia is pushing for the reopening of the international airport to welcome more tourists and strengthen trade relations. Since 1992, the airport has been dedicated to military activities but most of these are now at the Gudauta military airport, which has undergone significant changes since the 2008 recognition by Russia, and therefore Sukhum airport could re-open to international flights. Such initiative would allow tourists from countries with no direct border, such as Venezuela, Nicaragua, Nauru and Syria, to come to Abkhazia, considering the territory is a well-known tourist destination.

This could be a tremendous advantage for Abkhazia, as it would also mean that tourists from all over the world could come and have a stopover in a country that recognizes Abkhazia, like Russia. In effect, Chinese, Americans and French could now travel to Abkhazia via the countries that recognize the territory.

In July 2019, the leadership of Abkhazia issued a decree to open the “Vladislav Ardzinba Sukhum International Airport” for international flights.

Inside Syria's relations with Abkhazia

Although Syria only recognized Abkhazia in 2018, relations between the two entities stretch back centuries, but have increased in 2008 when Syrian president Bashar al-Assad said that Damascus agrees “with the essence of the Russian position” regarding the Abkhaz conflict. In 2013, Abkhazia appointed a Representative of the Abkhaz Foreign Ministry in Syria, then in 2015, the Abkhaz Foreign Minister met the Syrian Ambassador to Russia, Riad Haddad, in Moscow to say that his government believes Syria will recognize Abkhazia as a sovereign country in the future.

The entente between the two sides was reinforced during the refugee crisis, when some Syrians of Abkhaz origin were allowed to travel to Abkhazia (500 Syrians remigrated to Abkhazia). This decision was in the interest of both Damascus and Sukhum, as Damascus was not able to ensure the safety of some Syrian citizens, and for Abkhazia as newcomers are welcome to compensate for the demographic decline in Abkhazia which has had a weak birth rate for several decades.

As a symbol of this rapprochement, in December 2016, the first match in freestyle wrestling between Abkhazia and Syria was held in Sukhum, and Abkhazia provided humanitarian assistance to Syria in August 2017.

This rapprochement culminated in November 2017 with a free trade agreement between Damascus and Sukhum, which led to the possibility of recognition the following year. Unlike other countries, the Syria-Abkhazia relations are more profound, with a physical proximity. Indeed, despite being recognized by Venezuela, for example, almost nobody from that part of the world have visited Abkhazia, while more than 500 people of Syrian origin are present in the territory. Moreover, there are numerous exchanges and bilateral meetings. In May 2021, the Abkhaz president Aslan Bzhania visited Syria on a state visit and met with Bashar al-Assad.

This friendly atmosphere can be explained by several factors, other than Moscow’s wish, and notably by the fact that Abkhazia is a country at the intersection of the Muslim and Christian worlds. As such, the Abkhaz flag symbolizes this union with white for Christianity and green for Islam, and the Abkhaz society integrates Muslims and their practices, which makes it a bridge between the Orthodox and Muslim worlds, allowing for the rapid integration of Syrians.

Russia’s involvement in the Syria-Abkhazia relations

The Kremlin was the main actor to support the recognition of Abkhazia by Syria, since this served its diplomatic interests, and continues to do so in many respects. In this respect, Russia’s military presence remains strong in Abkhazia, notably with the two bases of Ochamchire which provides for the activities of the Federal Security Service of the Russian Federation (FSB) and the Gudauta base for the operations of the 7th Military Base.

While the Ochamchire facility is not of interest in the context of the Abkhazia-Syria relations, the Gudauta facility is different in that, due to the non-recognition of Abkhazia by Western countries, limited international supervision is possible on equipment coming from abroad or leaving the Gudauta airport. Therefore, if Moscow wishes, it can receive and send as much as it wants from this strategic point without having to justify it but to the Abkhaz authorities.

The secrecy surrounding the activities of the station in Gudauta and its connection with Syria is reinforced by the fact that a billboard depicting the good relations between Abkhazia and Syria is displayed near the military premises. There is also a significant amount of work carried out on the base, including the modernization of a football stadium, new fences, a well-mown lawn around the base, and careful management of the site, similar to that of the French Navy base at Seine-port in France. It is impossible to visit the base, nor to approach it via the land paths or the beach, the only vantage point is from the tall abandoned Soviet buildings in the nearby town. Unlike Ochamchire, where a conversation with the soldiers is possible in the vicinity of the barracks, the Gudauta site has a higher level of security, with the nearby restaurant being the only place to meet the soldiers who prefer not to talk about their duties.

While it is unclear to what extent the Kremlin interacts with Syria via the Gudauta facility, the presence of posters on the relationship between Abkhazia and Syria suggests that a connection exists.

In conclusion, the Syria-Abkhazia relations are born of Moscow’s determination, but are deeper than those between Venezuela and Abkhazia for instance. Furthermore, the recognition in 2018 opens the door to possible recognition by North Korea and Belarus, but more importantly to a resumption of international flights to Sukhum airport. If such a reopening were to take place, it would mean access to Abkhazia not only for the countries that recognize it, but also for all travelers willing to transit via Moscow, Caracas, Damascus or Managua. The opening-up of Abkhazia thus seems to be becoming a reality and leads to new questions, notably that of the position to be adopted by Western countries if they wish to continue to support Georgia and defend their approach in the South Caucasus.

Amie Ferris-Rotman, In breakaway Abkhazia, a loophole for North Korean workers amid beaches and Soviet relics, The Washington Post, 2019

Christian Axboe Nielsen, The Kosovo precedent and the rhetorical deployment of former Yugoslav analogies in the cases of Abkhazia and South Ossetia, SouthEast European and Black Sea Studies, 2009

International Alert, The Politics of Non-Recognition in the Context of the Georgian-Abkhaz Conflict, 2011.

Chargé d’Affaires, a.i. Harry Kamian, On Syria’s Recognition of the Independence of Abkhazia and South Ossetia, US Mission to the OSCE, 2018.