Disclaimer: The content of this article has been gathered using open-source intelligence (OSINT), no human intelligence (HUMINT) has been involved in the process. For further information, please do not hesitate to contact the author at michael.lambert@insead.edu. 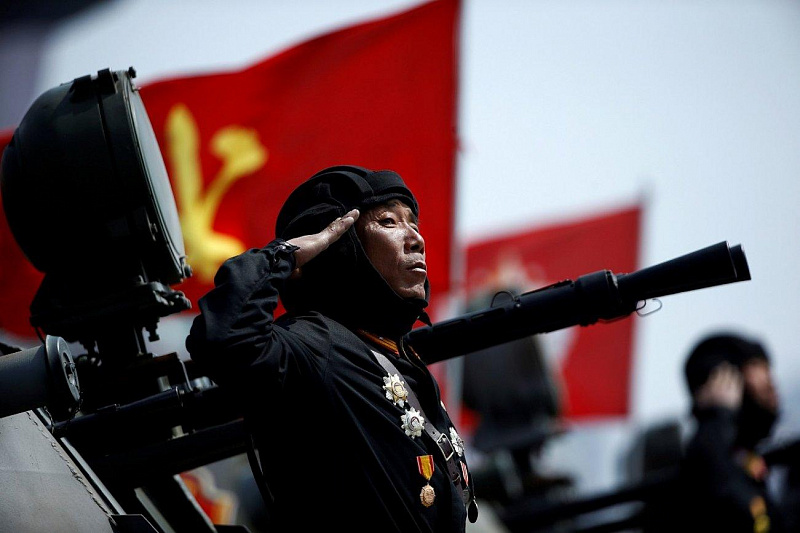 The Democratic People’s Republic of Korea (North Korea) is often described as a country cut off from the rest of the world1, despite the growing Internet penetration and digitalization of services in Pyongyang2. Although citizens are not allowed to leave the state without permission from the authorities, foreigners, particularly those from the country’s main trading partners, such as the Russian Federation and the People’s Republic of China, are subject to fewer restrictions when visiting the territory3.

As a result, the image of an isolated Communist state4, immune from Western influence, appears to be fracturing as the world becomes more globalized, and the so-called “Hermit Kingdom” is no longer exception to the growing demand for more gender equality, digitalization of the society and environmental sustainability.

While gender equality seems to be on the rise, as highlighted by the presence of Kim Yo-jong (Kim Jong-un’s younger sister who has even been presented as a possible option to succeed her brother and become the next Supreme leader5) and the growing influence of Kim Jong-un’s wife, internal changes are also taking place, particularly in the area of information technology (IT). Thus, Pyongyang has managed to increase its cyber-capabilities despite a shortage of financial means over the past decade6.

The expansion of IT skills comes as no surprise when one considers the profile of the brother and sister themselves. Both Kim Jong-un and Kim Yo-jong spent their childhood in Switzerland and attended the Liebefeld-Steinhölzli public school in Bern (Bern International School), the capital city of the Confederation, which exposed them to a technologically friendly environment as well as to the everyday use of English (for school), Swiss French, German and Italian (the main languages in Switzerland7).

Such an international environment may have influenced their vision of the world, and the emphasis on high-tech might also be linked to the education of the sister who graduated in computer science from Kim Il-sung University8.

In many ways, Kim Jong-un’s management of the country is peculiar from that of his father and, paradoxically, his academic background is more international than that of most Western leaders. For instance, Angela Merkel, Emmanuel Macron and Joe Biden, to name but a few, were raised and educated in their home countries with no academic experience acquired abroad.

Although the regime, charged with human rights violations9, remains authoritarian and an outpost of anti-Americanism, Kim Jong-un has managed to include pop culture and baseball in the daily life of citizens, to show his wife to the public and enjoy presenting a brand-new MacBook Pro on his desk. The paradigm change is also noticeable in the field of architecture, with the construction of new buildings in Pyongyang bringing color and new architectural styles in Ryomyong New Town (려명거리신도시)10.

Computer literacy may partly be responsible for the slight economic recovery that contrasts with the famine of 1994-1998 which cost between 240,000 and 3.5 million people their lives11.

To date, North Korea is using the North Korean won, which is not convertible on the international market. As a fixed currency, it is difficult to trade the national won on the foreign exchange markets. Like the Transnistrian ruble12, the currency is used by the inhabitants inside the country but is not relevant when buying goods and services abroad. This is a major issue to North Korean elites interested in investing and buying property on the international market, putting the North Korean won at a disadvantage.

Like Transnistria, North Korea has seized the opportunity presented by the recent rise of cryptocurrencies, the most famous being Bitcoin13, which is more flexible and outside of any central bank control.

As rumors have it, there is a special division, Room 39 (officially “Office 39 of the Central Committee of the Workers’ Party of Korea”), a secret North Korean party organization that seeks to maintain a foreign exchange slush fund for the country’s leadership14. This organization is estimated to earn between $500 million and $1 billion a year or more and may be involved in illegal activities such as counterfeiting $100 notes, producing medicines to be illegally sold abroad and defrauding international insurance. The bureau has shown a growing interest in cryptocurrency as a means of maximizing revenue while remaining within the law.

Nonetheless, acquiring Bitcoin or another crypto is not simple, and you still have to buy them with US dollars, Euros, or any other internationally recognized currency, which North Korea only has in small quantities, as it remains a closed economy with low foreign capital inflow.

Consequently, Pyongyang’s strategy for increasing cryptocurrency assets is to “mine” them. In the world of cryptocurrency, a mining pool is the pooling of resources by miners, who share their processing power over a network to distribute the reward equally according to the amount of work they have contributed to the probability of finding a block15. In the end, a share is awarded to members of the mining pool who provide partial evidence of valid work16.

As such, cryptocurrency, and the possibility to mine it, is very useful in countries where electricity is affordable, or‒in the case of North Korea‒where the state supports such operations. Mining has changed the landscape of isolated states, such as Transnistria17, Abkhazia18, Cuba19, to name but a few, and it seems to be particularly useful because the miners can literally provide a high income that can be exchanged for any other currency in the world with little or no controls.

Moreover, the recent increase in some other less known cryptos, such as CARDANO20, has been an opportunity for North Korean investors who could have multiplied the value of the investment up to 22 times in less than a year (2204.3% increase in one single year for Cardano21).

In addition to the potential of cryptocurrencies, North Korean leadership understood the relevance of cyber-warfare, as cyber-attacks could prove lethal to the infrastructure of opponents and could be carried out directly from home or abroad without being identified22.

Cyber warfare is at present the main asset of the Hermit Kingdom with its nuclear deterrence capabilities. While the country is unable to afford 5th generation fighter jets and heavy equipment to be on a par with South Korea and the United States, nuclear weapons ensure the country’s deterrence against any adversary, while cyber warfare makes it possible to target public and private infrastructure anywhere and at an affordable cost. Furthermore, since North Korea has little or no infrastructure relying on new technologies, a retaliation (e.g. from the United States) is unlikely, highlighting the growing disequilibrium between a country increasing its dependence on new technologies and, consequently, its national vulnerabilities versus a country relying on analog technology (North Korea) and, therefore, more resilient to cyber-attacks.

It should be noted that cyber-capacities require any state to invest in human resources. While investment in computers is not the most expensive part of the process, it depends on trained cyber-warriors to operate the devices. This includes extensive knowledge of English (the main computer language) and other languages to ensure the success of a cyber-attack on a non-English-speaking country (e.g. France), combined with in-depth training in programming and FINTECH for the resale of cryptocurrencies online to maximize the income.

It should be emphasized that the situation is even more complex in North Korea because Western cyber-warriors (e.g. the NSA23) have had access to new technologies since their childhood, and while new technologies are part of daily life in the West, this is probably not the case for most North Korean citizens, which makes the increase in cyber capabilities of the (North Korean) People’s Army and the Bureau 121 responsible for cyber-attacks and defense difficult24.

The new way of considering FINTECH and cyber-warfare in North Korea could be linked to the opening in 2010 of the Pyongyang University of Science and Technology (PUST)25, the first private university largely funded by evangelical Christian movements.

The aim of PUST is to contribute to North Korea’s economic development by producing professionals and leaders in technical disciplines, who are fluent in English and other foreign languages (such as Chinese or German) as well as accustomed to working in an international setting. Many Bachelor’s, MS, and PhD degrees are obtained in Electrical and Computer Engineering (ECE)26 and International Finance and Management (IFM)27.

In conclusion, North Korea’s strategy regarding Bitcoins and other cryptocurrencies is a convenient way of evading international embargoes and holding financial assets abroad, and it might have been influenced by members of the government interested in new technologies, such as Kim Yo-jong.

Nevertheless, the elites remain the principal beneficiaries, which means most of these activities are restricted to the leader and a close circle of friends. While cyber-warfare and crypto-mining are a reality that shapes and will continue to shape relations between Pyongyang and its partners overseas28, it is an example that underlines the digital revolution taking place in the country, which remains committed to a Communist ideology. Mining of the cryptocurrencies also shows that Kim Jong-un has adopted a new way of governing, distinct from that of his predecessor and one that suits his international education acquired abroad. His sister, Kim Yo-jong, has succeeded in attracting the attention abroad, including from the United States and Japan, to herself become a soft power tool29 similar to Natalia Poklonskaya after the crisis in Crimea30.

[2] As an example, many universities have accessible websites: http://pust.co

[3] For more information, have a look at: The Russian Embassy website in the DPRK (http://www.rusembdprk.ru/en/visa-requirements) and the People’s Republic of China Embassy to the DPRK (http://kp.china-embassy.org/chn/zjcx/)

[7] Romansh is also used in Switzerland, nonetheless the use of Romansh is limited even if represented in the political institutions in Bern as per requested by the Federal Constitution of the Swiss Confederation of 18 April 1999, Article 4 (https://www.fedlex.admin.ch/eli/cc/1999/404/en#art_4)

[10] The project consists of 40 of new condominiums, 33 of refurbished condominiums and 34 of public facilities including 6 schools, 3 kindergartens and 3 nurseries. 7 buildings for Kim Il Sung University will be built and 15 of commercial buildings will be constructed. Around the Kumsusan Palace of the Sun, only small buildings will be built due to the height restrictions. The motto is “Green city, energy-reduced city”.

[13] For those who may not be familiar with the subject: Bitcoin is a decentralized digital currency, with no central bank or single administrator, which can be sent from one user to another over the peer-to-peer network without the need for intermediaries[13]. Transactions are verified by network nodes using cryptography and recorded in a distributed public ledger called a “blockchain”.

In short, the currency can be used anywhere, while most banks do not allow you to pay or withdraw in some context, and while authorities are keeping an eye on transfers, a cryptocurrency enables you to bypass all these inconveniences.

[15] Should you be interested in knowing more about the topic, the Bank of England website is intriguing the concept (https://www.bankofengland.co.uk/knowledgebank/what-are-cryptocurrencies)

[16] If you are confused with this concept, the main idea is that you have machines (computers) that are calculating all the time, which requires a lot of electricity, and are therefore rewarded with cryptocurrencies for their work (e.g. Bitcoin), which you can keep or exchange for another currency such as the US dollar.

[24] According to a report by Reuters (https://www.reuters.com/article/us-sony-cybersecurity-northkorea-idUSKCN0JJ08B20141205), Bureau 121 is staffed by some of North Korea's most talented computer experts and is run by the Korean military. A defector indicated that the agency has about 1,800 specialists. Many of the bureau's hackers are hand-picked graduates of the University of Automation, Pyongyang and spend five years in training. While these specialists are scattered around the world, their families benefit from special privileges at home