While having limited and diminished capability to influence the process and the outcome, Russia’s role as a mediator remains indispensable 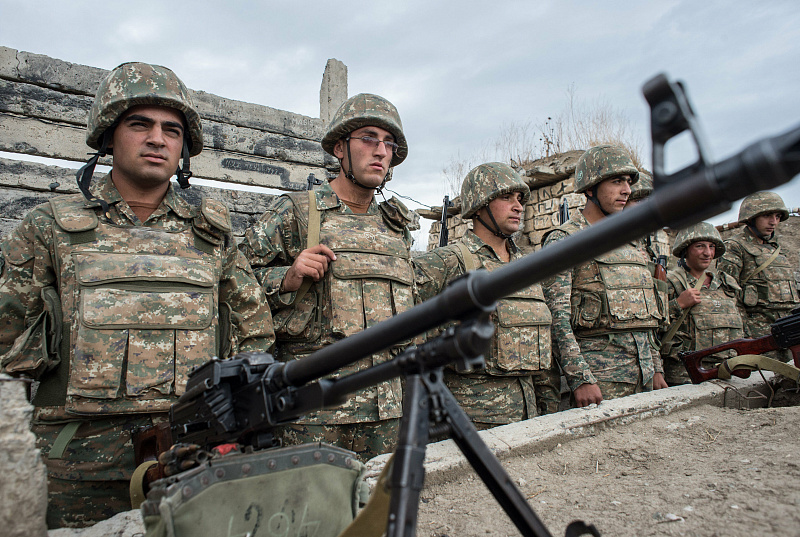 On the 27th of September 2020, the international community witnessed the outbreak of hostilities in the South Caucasian non-recognized republic of Nagorno-Karabakh. It was not the first such occurrence since the Bishkek Protocol of 1994 put an end to the most violent phase of the conflict, which started during the last years of the Soviet Union and further escalated after its dissolution. The Russian Federation was from the very beginning concerned by the developments in and around Nagorno-Karabakh, as the Russian scholars Andrei Sushentsov and Nikita Neklyudov contend that, “Russia sees both the North and South Caucasus as a unified sphere of interest, source of vulnerability, and field of responsibility.” Thus, in 1992, Russia became a co-chair of the newly-created OSCE Minsk Group tasked with finding a sustainable peaceful settlement of the Nagorno-Karabakh conflict. The input of an experienced Russian diplomat and expert - Vladimir Kazimirov, the then head of the Russian mediation mission, official representative of the President of the Russian Federation on Nagorno-Karabakh, and co-chairman of the OSCE Minsk Group, was crucial in negotiating the 1994 Bishkek Protocol.

Twenty-six years later, on the 9th and 10th of October 2020, it was Sergei Lavrov, the Russian Minister of Foreign Affairs, whose mediation role was critical in the more-than-ten-hour negotiation marathon with his Armenian and Azerbaijani counterparts, which eventually led to the ceasefire agreement. Nevertheless, it took notably longer than before to bring the sides to the negotiation table and all attempts at upholding the ceasefire (the second agreed upon with the input of Sergei Lavrov, the third brokered by the US, and the last mediated by the co-chairs of the OSCE Minsk Group) fell short of halting the armed clashes and returning the sides to the peace talks. These developments signal a diminishing Russian influence on the Nagorno-Karabakh conflict and therefore, this article aims at analysing the evolution of Russia’s foreign policy toward and influence on the Nagorno-Karabakh conflict, shedding light on the differences of the current situation.

Unlike in all other de facto (or unrecognized) states in post-Soviet space, Russia does not fulfil the role of Nagorno-Karabakh’s patron, which is in this case Armenia, with Azerbaijan being Nagorno-Karabakh’s parent state. For Russia, it has always been important to have a balanced relationship with both Armenia and Azerbaijan due to: first, Russia having strong Armenian and Azerbaijani diasporas; second, Russia wanting to retain military presence in Armenia, while having good relations with Azerbaijan that shares a border (demarcated in 2010 after 14 years of talks) with the Russian region of Dagestan, which is of high security concern to Russia. Neither does Russia want a deterioration of relations with any of the two in the context of already seriously strained relations with the third South Caucasian state – Georgia. Russia’s preferred approach is thus for Armenia and Azerbaijan to settle their disputes themselves, with Russia willing to serve as a mediator and broker rather than supporter of one of the sides.

Both Armenia and Azerbaijan cultivate relations simultaneously with Russia and the West, which has also been reflected in the fact that the approach(es) to Nagorno-Karabakh conflict have not been influenced by the deterioration of Russian-Western relations. Therefore, regarding Nagorno-Karabakh, there is still a convergence of Russia’s and the West’s approaches, representing a unique case in the contemporary state of relations. This has been reflected in Russia’s foreign policy approach in this particular case, which has been rather consistent since the fall of the USSR, although it took some time until it became more consolidated, as in the early 1990s, the Russian military took some foreign policy steps independently from official Moscow. The peculiarity of the Russian position has since the inception been the country’s simultaneous role as a mediator and a as a supplier of military equipment to both conflicting parties. Although Russia has invested considerable effort into conflict resolution and has tried to achieve an outcome that would be favourable to its interests (e.g. one that would include a Russia peacekeeping mission), it has been neither willing nor able to impose a settlement on the conflicting sides.

After the dissolution of the USSR, Russia undertook steps to balance the Azerbaijani military advantage by authorizing supplies to Armenia. At the same time, Russia assigned a particularly high value to mediation and conflict resolution efforts, which was perceived by Boris Yeltsin, then President of Russia, and Andrei Kozyrev, then Russian Foreign Minister, as crucial for Russia’s international status and its ambitions to integrate into the international system. As a result, Russia became involved in the work of the OSCE Minsk Group together with the West, although at that time, the two could not find a common position and thus, Russia was also engaged in mediation efforts on its own. Nevertheless, it is important to underline that while Russia has presented certain initiatives beyond the OSCE Minsk Group, those never ran against the activities of the Group and Principles agreed upon within its framework.

Although the Russian initial mediation and conflict resolution attempts fell short of committing the sides to a ceasefire, it was abovementioned input of Vladimir Kazimirov that finally secured a ceasefire on the 12th of May 1994. Nevertheless, in spite of Russia’s unwearying efforts, a political agreement on conflict settlement could not be reached and Russia has over the years repeatedly, yet unsuccessfully, attempted to send a peacekeeping mission to Nagorno-Karabakh, which would have increased its presence and influence in the region, satisficing Russia’s national interests and quest for ontological security to a larger extent than the status quo.

Under Foreign Minister Yevgeny Primakov, Russia’s foreign policy toward the post-Soviet space became more consolidated and systematic, aiming at increasing influence, integration, and conflict settlement efforts in the post-Soviet space. In 1997, two important events happened: first, Azerbaijan became a founding member of the GUAM group seen by Russia as aimed at containing it; second, Russia expanded its military ties with Armenia, though assuring that it was by no means directed against Azerbaijan. From the Russian side, it was a reactive strategic move serving its objectives of securing influence and military presence in the post-Soviet space, which has to be interpreted in the context of gradually deteriorating relations with the third South Caucasian state - Georgia.

In the 2000s, Russia maintained its active role in conflict settlement. With the other co-chairs of the OSCE Minsk Group, it worked out the Madrid Principles that were adopted in 2007 and have, in their updated 2009 version, ever since been the cornerstone of the conflict settlement efforts, abided by all the mediators. Nevertheless, the beyond-the-Minsk-Group initiative of the Russian President Dmitry Medvedev, which culminated in the 2011 Kazan summit attended by the Armenian President Serzh Sargsyan and his Azerbaijani counterpart Ilham Aliev, did not result in the sides signing a document committing them to follow these Principles. In the aftermath, Moscow scaled down its pro-active conflict resolution efforts.

In late July 2014, when the deadliest violence since the 1994 ceasefire agreement erupted at the Nagorno-Karabakh line of contact, Russian mediation once again stepped in to de-escalate the situation The following initiative of President Vladimir Putin, undertaken due to Russia’s “special and particularly close relations” with both Armenia and Azerbaijan, did not materialize and progress in the peace process could not be achieved. In 2015, Russia put forward the so-called Lavrov Plan (it was not officially published) and when the four-day war broke out in April 2016, as the Azerbaijani and Armenian forces started fighting at the line of contact, it was Russia that helped to de-escalate the situation by brokering a ceasefire. The Lavrov Plan was again on the table and while Azerbaijan was willing to consider it, removing opposition to Russian peacekeeping, Armenia rejected it due to the vagueness of provisions on the final status of Nagorno-Karabakh. Over the years, the openness of Azerbaijan and Armenia to a solely Russian peacekeeping mission has faded and progress in conflict settlement has not been achieved.

For a long time, Russia has maintained close contact with both Armenian and Azerbaijani leaderships. Moscow has not considered adopting a revisionist approach in favour of supporting a change of borders and/or recognizing Nagorno-Karabakh, and anytime the conflict escalated, Russia refrained from making categorical statements and value judgements on who is to blame. Therefore, both sides have valued the contribution of Russian mediation, which has also been demonstrated in the current situation. Nevertheless, the September 2020 flare-up has indeed been different from the previous instances of escalation, due to two important changes in the region, which have diminished Russian influence on the conflict and thus led to the prolonged period of armed clashes.

First, both Armenia and Azerbaijan have assertively cemented their contradictory positions, which was to be seen in the October 2020 interviews of Nikol Pashinyan, the Armenian Prime Minister, and Ilham Aliev, the President of Azerbaijan, with Dmitry Kiselev, Director General of Russiya Segodnya International Information Agency. This development has palpably reduced the possibility of a negotiated compromise, which in turn poses limitations on the Russian influence on the sides. Second, the regional influence of Turkey, which has a closed border and no diplomatic relations with Armenia, has been on the rise, as its ties with Azerbaijan have grown stronger, conspicuously demonstrated by the Summer 2020 two-week joint military drills that followed the Armenian-Azerbaijani border clashes of July 2020. Indeed, after the fighting broke out in late September 2020, the Turkish President Recep Tayyip Erdoğan called on Armenia to end the occupation of Azerbaijani territories and Foreign Minister Mevlüt Çavuşoğlu claimed that Turkey was ready to support Azerbaijan at the negotiation table as well as on the ground. While the Russian-Turkish communication channels are in place and well-tested (Syria serves as an example), and the Russian and Turkish foreign ministers have recently been in contact to discuss the crisis, the positions and strategic interests of the two countries notably differ in this case, which makes the situation in the region more complex and entangled.

These two factors have thus hindered Russia’s mediation efforts as well as its ability to prevent the escalation, which would be in line with Russia’s national interests of maintaining stability in the region and preventing a potential spill-over to Russian Northern Caucasus. On the other hand, while having limited and diminished capability to influence the process and the outcome, Russia’s role as a mediator remains indispensable, which is recognized by the conflicting parties as well as by the international community. In this context, it is to be expected that Russia will refrain from openly supporting one side at the expense of the other, unless the conflict spreads to the Armenian territory. It is nearly certain that Russia will carry on with its mediation efforts aimed at bringing the violent phase of the conflict to a halt and addressing the situation in accordance with the Madrid Principles, be it within the OSCE Minsk Group or beyond.