Your preferred candidate? None!

“None of the above!”, or “Against all” («Против всех»), is an option that a voter can choose at an election to determine that none of the candidates that are running for office reflects voter’s interests, or simply said it is an option to bespeak disapproval against all candidates. This curious new-but-old option, in case of Russian elections, is presently discussed in Russian Duma and I believe that this question deserves some more analysis with some extra flavor of political science.

Let’s start with few facts: For elections to Duma, Russian Federation exercises proportional representation system (since 2005 [1]), using Hare quota with largest remainder seat allocation, where a voter chooses a closed party list in single nationwide constituency of 450 mandates. According to the Ministry of Justice, current number of political parties in Russian Federation is 74. [2] One of my previous researches shows that Russian seat allocation system is fairly proportional and that only change of the whole system to majoritarian or abolishment of 7% threshold would bring very different results. In any case, it must be admitted that proportional representation system accompanied with high electoral threshold helps large established parties. [3] Nevertheless, this is publically admitted reality by the ruling authorities, which argue that party system would get too fractionated, thus ineffective. 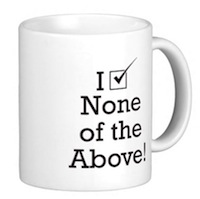 “Against all” is not an option since July 2006, when it was abolished by both State Duma and Council of Federations. [4] This feature was added to Russian ballots in 1991, in times of hard transition and certainly played its role after long period of pro forma elections in the previous system. Even despite the fact that “Against all” was abolished, civil campaign for boycott of 2011 Duma elections called for crossing of ballots as a sign of disagreement not only with all candidates, but also with the system itself. [5]

What does international practice show? “None of the above” is not a common praxis and you would hardly look for parallels between countries that are using it. Countries like India, Greece, Ukraine (recently abolished in 2012), Columbia, Bangladesh, Nevada (U.S. state) offer(ed) this choice on their ballots, however they differ widely in the legal proceedings after the election. A proceeding after the elections is, in my opinion, the most important part. Undoubtedly a wide variety of formal or informal procedures might be invoked ranging from calling new elections, leaving the seat vacant, reopening nominations, refusal of the seat by the candidate, or (as usual) nothing.

What does “Against all” mean in Russian conditions?

Looking at conditions stated above, voting “against all” in Russian parliamentary elections would be quite an irrational step for a voter. Virtually it would be equal to abstaining from voting. Hypothetically if “against all” was reestablished, according to one’s preference, voter looking at his or her ballot would have three options: Firstly, they could vote for the biggest party, secondly, they could vote for one of other (currently) 73 parties, and finally, vote against all. Since the debate around parliamentary elections sticks to the question whether United Russia (Единая Россия) gets parliamentary majority, we can assume that first and last options somehow overlap. Due to seat allocation mechanisms, your decision to vote “against all” is seen equally as not showing up at all. You only increase electoral turnout. Do people know this? I doubt…

On the one hand, I agree that Russia needs to stabilize its party system, since I do not consider system of “one big party and many small parties fluctuating around it” a real system. On the other hand, we have to consider vulnerability of the current system towards populism. Starting a small party in Russia, you can practically promise anything as long as you think it will bring you enough votes to get in the parliament. This brings severe centrifugal tendencies to Russian political culture, and polarization of ideas on very extreme poles. Somewhat dangerous feature to be seen in country as Russia.

It depends from which perspective you look at the whole issue. In conditions of presence of 74 political parties, by reestablishing “against all”, you rather create an option for people who disagree with the system as a whole and not really for voting against 74 political parties that are running in elections. However, in contrast to their initial goals, by voting “against all” you effectively fortify the system as it is by supporting parties that usually make it to Duma. Although we must admit that this helps the stability of the system, it neither increases political reach of citizens on the political outcomes, nor does it protect political culture from reckless populism. Is that what you wanted when you voted “against all”? I doubt…

Why don’t you do right? 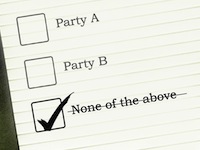 If you asked me what do I think about this option with regard to institutional functioning of a state, I would say it is a brilliant idea! Not only that it absolutely matches thoughts of many people who reject to take part in elections due to their wider disagreement with the political system, or due to feeling of senselessness of voting in Russia, but also in the central and Eastern Europe (CEE) as a whole. People feel disconnection between themselves and politics and often feel much apathy towards any possible change. The tendency of deteriorating turnout in CEE countries seems to be a trend for the running decade, and Russia, with fluctuation around 60-ish %, is not an exemption. I am convinced that problems with lethargic political culture goes hand in hand with dysfunctional political system and it is hard to say which influences the other more.

Small comparison to other countries from the region, which operate under slightly different conditions: Ukraine’s electoral turnout at parliamentary elections has been gradually decreasing between 2002 and 2012 from 69.5% to 58.99%. [6] Similar tendencies are seen also in Slovakia, central European country of the European Union, where turnout decreased in the same timeframe from 70.06% to 59.11% (although minimum was achieved in 2006 – 54.67%). [7] Number of votes “against all” in Ukraine ranged from 2.5% in 2002, and 1.77% in 2006 to 2.73% in 2007. in 2002, Ukraine used a mixed electoral system and although only 2.5% of all votes were cast “against all” in proportional representation system, 7.9% of votes were “against all” candidates in single constituencies. We can see from the Ukrainian example that it is hard to find any obvious correlation between electoral turnout and voting “against all” candidates. However, it seems that the more personal the vote is, the higher probability that people will vote “against all”.

The problem emerges when someone asks about solid formulation of rules regarding “against all” option. Would a parliament that receives too many “against all” votes be considered without a mandate from citizens, who are (allegedly) the source of the legitimacy? If the option is established without real and strong legal procedures, it is useless. Not only it is useless, but also if applied by a big party, it could be considered clearly populist, since it will probably siphon off votes from small parties while the proposer will present himself as a great democrat. Apathy in political culture cannot be put to end neither immediately, nor by ambiguous changes in the electoral system. In this case, I would argue, it is absolutely useless modification. Reasonable approach would be to leave the electoral system as it is with all its flaws at least for few elections.

Employing stable rules of the game that would last for at least a decade would undoubtedly help Russia more than constant manipulations with how things are done here.