2017 French Presidential Elections: a decisive choice for the improvement of Russian-French relations

Print
The race for the French presidency that already started few months ago is about to end. Moscow was balancing between two candidates, Marine Le Pen and François Fillon. If half a year ago, one could definitely consider that Moscow`s favorite candidate was Marine Le Pen from the Front National party, during the last few months, Moscow has shown a particular interest in François Fillon`s candidacy. But the French electoral campaign took a turn that Moscow did not anticipate. About two months ago, one could state that Russians were confident: all the polls predicted, in the first round, the victory of Marine Le Pen and François Fillon — two candidates considered loyal to Russia and advocating a relief or lifting of EU sanctions against Russia. According to the last poll published on April 17th 2017, French voters might have to chose between Emmanuel Macron and Marine Le Pen at the second round. Considering the sanctions that have been renewed until July 31st 2017, the fact that François Hollande has refused to meet with the Russian president Vladimir Putin, which can nearly be considered as diplomatic incident as well as the disagreement between France and Russia regarding Syria and Ukraine; relations between the two countries have been at their worst point. As both candidates, François Fillon and Marine Le Pen, keep insisting, the future French government will play a major role in the normalization of the relations with Russia. The Russian and French authorities would have the opportunity to relaunch the Franco-Russian dialogue. Russians and Russophiles wonder what candidate would be more beneficial for Moscow? If it could be debated before, the situation has changed. In the case, we face a dual Le Pen — Macron, the answer would definitely be Marine Le Pen. 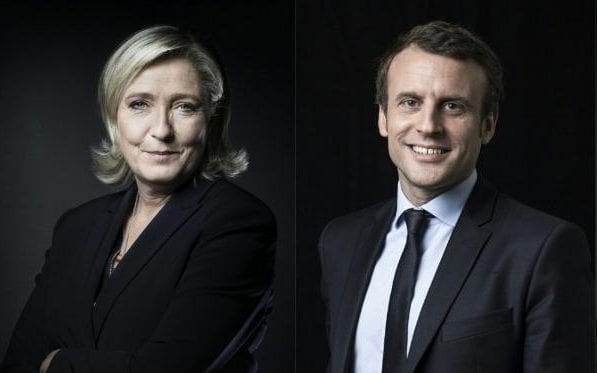 AFPThe president of the National Front, Marine Le Pen, promised that if she will be elected, the country will leave the European Union and the euro zone. Moreover, she has invited other euro-members to follow her step. The Russians know well that the President of the FN supports Moscow's policy: she does not disguise her sympathy for the Russian rhetoric advocating independence in foreign policy and national sovereignty. She considered modern Russia as a model of state development from which France should learn. Marine Le Pen`s victory in May 2017 could definitely boost the bilateral relations. As she declared, Marine Le Pen supports an independent foreign policy: "France will ally with all non-aligned peoples against ultra-liberalism and individualism." She intends to base her foreign policy on three axioms: non-interference, sovereignty and political freedom. This is roughly the rhetoric defended by Putin's Russia. However, Marine Le Pen will confronted to the "favorite" of the French political elections, Emmanuel Macron. What will come out for Russia in case of Macron`s victory? According to Macron`s official position, he does not adopt an anti-Russian or conflicting approach toward Russia. In fact, he tends to avoid concrete declaration regarding Russia and other major topics. (1, 2) However, Emmanuel Macron stated, that "the independence and security of France" are key priorities for him. Independence from the European Union and security especially regarding the Islamic State are precisely the main slogans of the National Front of Marine Le Pen. During a debate, the latter pointed out this similarity and asked him how their programs differ from each other regarding this matter. His answer has been widely related by Russian media: "Unlike you, I do not want to work in tandem with Putin". Nevertheless, Emmanuel Macron advocates an "independent" and "sovereign" dialogue with Russia in order to normalize the relations between the two countries and plan a de-escalation of the sanctions. Moreover, according to the presidential candidate, the resolution of the Syrian conflict depends on productive dialogue and negotiations with Russia, as well as with the other "authoritarian" powers of the region, including Turkey, Iran and Saudi Arabia, with which France does not share the same values. He underlined that they are essential partners in the establishment of peace in the Middle East. Even though both candidates advocate dialogue with Russia, Marine Le Pen seems to be the most suitable candidate to radically change France`s attitude towards Russia, normalize and improve the relations. One have to keep in mind that Emmanuel Macron is a pro-European candidate. However, being pro-European does not necessary engender an hostile attitude toward Russia. But Emmanuel Macron is part of the Western establishment and would be limited in taking decisions or actions in favor of Russia under the pressure of Germany and more generally speaking of the European Union. One can hardly believe that Emmanuel Macron is an exception and will go against the pro-European French political tradition as well as against his own faction by promoting dialogue with Russia. While Marine Le Pen, as she declared, wants a "respectful multipolar world to all the Nations" and considers the national interest as "the only guide to diplomatic action". Her foreign policy based on a realist approach turns out to be much closer to the Russian foreign policy`s approach.
Share this article