Is China on the brink of a food crisis?

It is not a secret that the current COVID-19 pandemic has been affecting people all around the globe. The virus touched almost all spheres of regular life – i.e. it resulted in temporary or permanent closure of businesses, a rise in the unemployment rate, inability to physically spend time with family and friends. Such drastic changes in times of uncertainty significantly impacted the well-being of the world population. Moreover, Food and Agriculture Organization of the United Nations (FAO) warned about the emerging food shortages worldwide. According to FAO statistics, global food prices have been on the rise for four consequent months, hitting their maximum in September 2020. China – the place where the virus originated – is one of the states that have been seriously affected by the disruptions, including production and distribution of food. 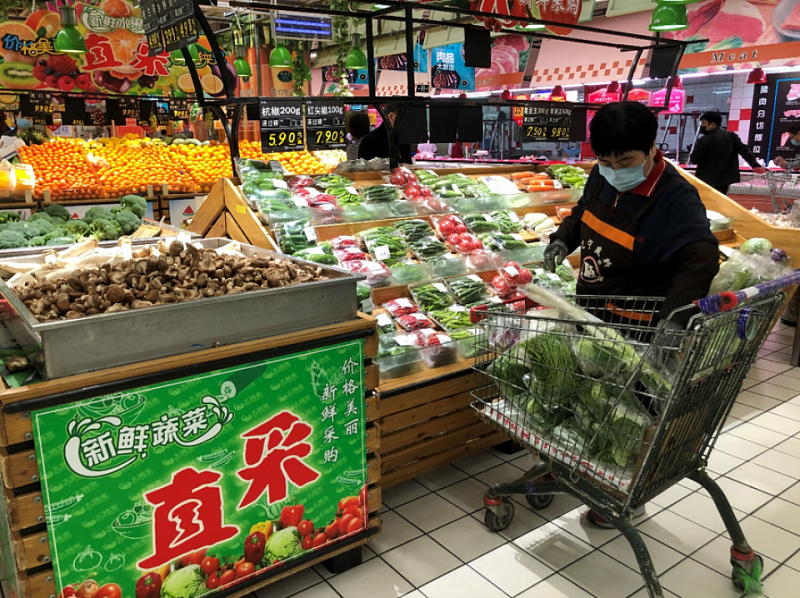 In his speech on August, 11 Chinese leader Xi Jinping did not admit any food shortages. However, he promoted food security through the campaign “operation empty plate,” thereby encouraging people to stop wasting food. It is interesting to note that Mao Zedong introduced a similar food campaign before the 1959 Great Chinese Famine. Meanwhile, there has undoubtedly been a significant increase in food prices in China. Many experts claim that China is on the brink of a food crisis that has been manifested as a result of lockdowns, infected livestock, and poor weather conditions. It is difficult to give any predictions or estimations about the future food situation in China because the country does not share enough of its data with the rest of the world, yet it is possible to answer the question why the state faces food difficulties.

The National Bureau of Statistics of China reported that, on average, food prices have increased by 11.2% compared to 2019. The price level of vegetables increased by 6.4% in one month; egg prices soared by 11.3% within the same period. Pork prices grew the most, by 52.6% compared to the last year's statistics. Why is it important?

Firstly, many workers and their families who faced loss or decrease of income or remittances became food insecure. That, in turn, has had social repercussions for the overall level of crime, health concerns among adults and infants, high death rate, different demographic and economic challenges. Furthermore, international trade will also suffer: due to the lack of labor force Chinese imports in foreign countries will seemingly increase in price.

Secondly, China, along with other countries, was in a period of recession earlier this year. Food insecurity will cause difficulties in coming out of this financial downturn.

The impact of lockdowns on food supply chains

One of the main factors contributing to the declining agricultural productivity and spiking food prices in China is the restrictions on personal mobility and transportation of goods. In January Chinese authorities adopted measures to limit mobility within the country; they imposed "city lockdowns, traffic control, and closed management of villages and communities." Such restrictions impacted food supply chains. For the production part many workers experienced difficulties getting to work that created a shortage of physical labor. That is why some crops were not picked, others were not even planted. As a result, the supply of agricultural goods decreased. On the other hand, at the beginning of the year, the demand for them also fell as restaurants and bars were closed. Thereby, many crops went to waste, while farmers did not make enough profit to purchase the seeds and fertilizers for the next season. It is a problem because businesses continue to open up, raising the demand and prices on crops. Immobility also impacted the distribution of seeds and fertilizers to the farms that disrupted the plantation season. Furthermore, the distribution of agricultural goods to grocery stores became difficult. Particular inconveniences associated with the restrictions on mobility all added up to the spike of prices on crops.

Another factor impacting the emerging food crisis in China is the failure to rebuild last year's loss of pigs due to the infection. Chinese porcine farms were hit by the African swine fever outbreak that infected and killed a large number of pigs (40% of total Chinese pigs' population), decreasing the supply but increasing the prices on pork in 2019. According to China's National Bureau of Statistics, pork prices were 52.6% higher in August this year than the year before, while corn prices – the main porcine fodder – increased by 20% compared to last year. Chinese farmers failed to improve the situation in 2020 due to severe flooding. The increased amount of precipitation caused considerable losses of corn and thus the inability to feed pigs. China began to import crops from abroad – particularly, corn from the US. As the United States Department of Agriculture (USDA) stated, China had been importing 195,000 more tonnes of American corn than the year before.

Some experts claim that Chinese diplomatic relations with such Western countries as Australia, the US and Canada shattered due to the fire of four ballistic missiles on the Indian border on August, 26. These states are China's major food exporters. If their diplomatic relations with Beijing worsen, then the trade has a high chance of being negatively affected as well. In other words, Chinese imports of crops have the risk of becoming more expensive, meaning that the prices of pork and other goods might rise even more.

Finally, worsened weather conditions – some parts of China experienced drought, others were hit by flooding – led to a decrease in crops and a significant increase in food prices. Southern, Central and Eastern China underwent a period of heavy rain and the worst flooding in the last hundred years. Excessively high water levels in major Chinese rivers, including the Yangtze River, resulted in the evacuation of 15 million people in July 2020. Moreover, the flooding destroyed 13 million acres of agricultural land, which is estimated to cost at least $29 billion of economic damage. In the meantime Northern (Xinjiang province) and Southwest (Yunnan province) China have gone through a period of severe drought. In April 2020 nearly 1.5 million people in Yunnan province were caught in an emergency situation: shortages of drinking water, damage of hundreds of hectares of crops and livestock. Consequently, the supply of many agricultural goods and pork decreased, which spiked the prices on these goods.

To conclude, immobility, African swine flu, worsened weather and security conditions led to the growing food shortages and increasing food prices in China. This being said, the Chinese government has been working on that problem. It has taken special measures to ensure sufficience of agricultural goods by investing in various disaster relief funds for different crops, particularly rice and wheat. For example, Chinese authorities allocated 1.4 billion yuan to save the agricultural harvest in Hubei province. Due to the substantial loss of agricultural products, China has also increased its imports. General Administration of Customs reported that China’s grain imports rose by 22.7% in July 2020 compared to the previous year. Meanwhile, the Chinese leader took a gentle approach to solve this problem. He did not announce the issues related to the insufficient number of crops; instead, he adopted a program for encouraging people to be more frugal with their eating habits. The Chinese Academy of Social Sciences followed the same path as it denied anticipation of a food crisis in the short-term perspective, yet warned about possible food shortfalls by 2025 if no agricultural reforms take place. As of now, China is not on the break of a food crisis; however, its shuttered prospects for long-term food sustainability are subject to dangerous repercussions.