Italy’s Socio-Economic and Political Picture: on the Importance of Maintaining a Strategic (Informal) Partnership with Russia

That many in the EU countries don’t support the sanctions’ escalation with Russia should not come as a surprise. Besides their evident lack of effectiveness in changing Russia’s behavior, economic backlashes are convincing people that they might not be the most appropriate instrument, especially under the light of the difficult economic conjuncture affecting Europe.

This is particularly true for Italy, where all the opposition parties –no matter from which side of the political spectrum, have given voice to the discontent coming from both food producers, who have been targeted by Russian’s countersanctions, as well as from the broader public opinion.

The Italian Prime Minister, Matteo Renzi has been harshly criticized for his stance in support to the EU sanctions. Nonetheless, he has also sought to maintain alive the privileged relations that Italy has with Russia. At the present time, his foreign policy approach appears to be the only available one for pursuing the Italian national interests without causing irritation to EU partners.

The aim of this article is both to cast some lights on the Italian socio-economic and political moment with regards to the overall climate of tensions with Russia as well as to take stock of how the government is actually managing the situation. Given the strategic economic partnership that Italy and Russia still informally maintain, such overview is needed to understand and eventually improve the current state of affairs. 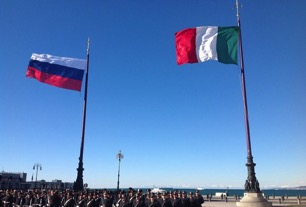 THE ECONOMIC EFFECTS OF SANCTIONS: WHAT DO PEOPLE THINK?

The Italian economy is slowly rebounding after seven years of recession and stagnation. In its last report the Bank of Italy has pointed to positive signals in terms of internal demand’s growth, increase in investments and stabilization of unemployment. Together with falling oil prices and the Euro’s depreciation –which should boost the exports to +3.9% this year, the GDP growth is expected to reach +0.7% in 2015 and +1.6% in 2016.

Yet, Italians do not feel out of the crisis at all. In July the consumers and enterprises’ trust index of economic conditions fell. Although this does not represent a big issue, it reflects the pessimistic attitude that has rooted in the Italians’ minds since the 2008 crisis. And sanctions certainly don’t help. 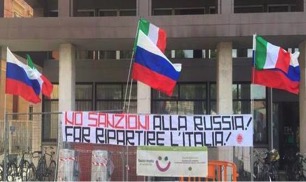 (no sanctions on Russia! Let's Italy starts over!)

According to the most recent report provided by Coldiretti (the most important farmers’ organization, both at national as at the EU level) Russian sanctions have cost Italy around 240 million euro only of missed exports of agricultural goods. The resulting excess of demand on the internal market has then caused prices of some sanctioned products to slump by around 20 percent.

The report also underlines the sharp increase (30 percent) in the production of Italian-like food (such as mozzarella and salami) registered in the Russian Federation. The effects of this development could have dramatic consequence for Italian producers in the long run.

The ruble’s fall has hit hard exports of unsanctioned products as well. The “Il Sole 24”, a main Italian newspaper, indicates an overall decline of exports to Russia equal to 11.6 percent in comparison with the previous year. “Potential losses can reach the astonishing sum of 3 billion euro”, affirms Mario Calenda, Deputy Minister of Economic Development. Besides the agricultural sector, among the ones hit hardest there is wine (-35 percent of value) and footwear (-22 percent).

The current tensions and the ruble’s fall have also determined a dramatic decline on the influx of Russian tourists to Italy. According to the Italian Agency of Tourism (ENIT), tourism slumped by 42% in the first four months of the year and it is expected to have declined further in the current summer months. Although the luxury market still drives Russian expenditures in the “Bel Paese”, great losses are registered for other economic sectors.

Given these data, a recently released poll by “Libero”, an Italian newspaper, has advanced the Italians’ preoccupation for the current state of affairs with Russia. According to the poll, 54 percent of surveyed think that Italy should lift the sanctions –even unilaterally. Although this is unlikely to happen, opposition parties from all sides of the political spectrum have been quite receptive in channeling such discontent.

OPPOSITION PARTIES: BETWEEN MEETINGS AND MOTIONS 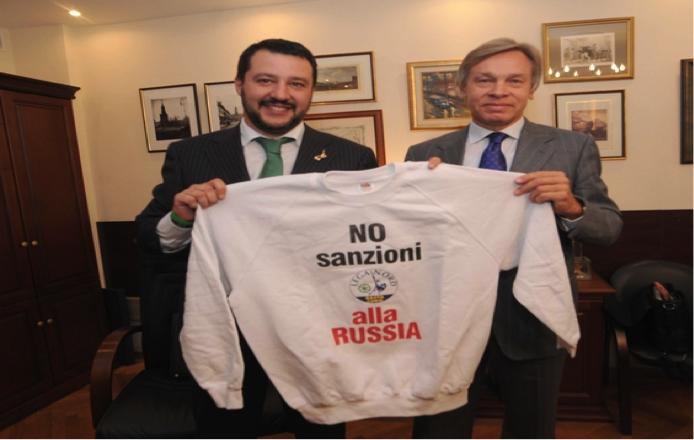 (Matteo Salvini at the Duma)

Eurosceptic parties, such as the Northern League of Matteo Salvini for example, have promoted long ago the slogan “stop sanctions” in an effort to acquire political consensus. Northern farmers –who represent the hard core of the Northern League’s voters, have indeed been hit the hardest. Confindustria Padova (the Italian non-profit employers’ federation of the city of Padova) foresees losses equal to 538 million euro only for the Veneto region by the end of 2015.

Salvini’s party has therefore been the most active in this sense: besides promoting an inter-parliamentary group called “Putin’s friend”, Salvini himself flew to Moscow to meet with President Putin last December. In another occasion he gave a speech against sanctions at the Duma, where he was welcomed with applause.

The Five Stars Movement led by the former comedian Beppe Grillo has also embraced the slogan “stop sanctions”. On his blog several articles ask for sanctions to be lifted, while Five Stars’ deputies have presented a motion to the Parliament asking for the removal of such measures.

Last but not least, Putin’s old friend, Berlusconi, went to visit him in Crimea after the EU Parliament voted for the extension of sanctions last June. The official aim of the journey was to try to cool down the climate of tensions between the EU and Russia. Although this goal appeared to be out of reach even for Berlusconi, his party took the chance to present a motion to lift the sanctions as well.

RENZI AND PUTIN: ARE WE STILL STRATEGIC PARTNERS? 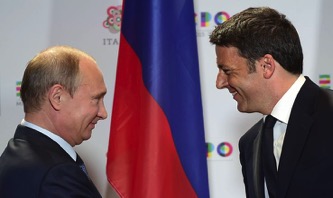 Nonetheless, the Italian Prime Minister Matteo Renzi, and its party, the Democratic Party (PD) gave overall support to the EU sanctions. Last June PD’s MEPs’ voted in favor of extending the measures. Renzi actively participated in imposing sanctions on Russia within the EU framework. Also, he has never disclosed any intention to lift them -as far as the situation in Ukraine remains unstable.

Yet, the Italian Prime Minister is conscious of the great importance that Russia has for Italy. Besides the furniture of gas, cooperation between private firms in sectors such as technology and transports remain strong. As a result –and by following a long tradition of Italian foreign policy, Renzi is trying to keep his foot in two camps. From one side he firmly supports the EU directives. On the other, he seeks to establish some sort of direct dialogue with Moscow.

Renzi had been the first Western leader to end Russia’s international isolation by visiting President Putin in Moscow last March. Although the Ukrainian situation was left on the background at that time, possible cooperation on other fronts –such as terrorism, was discussed. Both leaders also underlined the importance of the “strategic partnership” that the two countries maintain despite the current rigidities.

On the invitation of the Italian Prime Minister, President Putin went to EXPO, in Milan, last 10th of June. At that time the argument of sanction was central. Putin pointed out the damages that sanctions have caused to the Italian economy. Renzi, on the other hand, pressed for the implementation of the “Minsk 2” agreement as a basis for lifting sanctions. Beyond this, the fundamental importance of mutual cooperation between Italy and Russia was again put first.

WHEN POLITICS IS STUCK, BUSINESS MUST GO ON

Italy cannot afford to lose its ties with Russia. Yet, it cannot move away from its EU partners neither -especially in a moment in which the integrity of the EU itself is at risk. Therefore, the two-fold attitude adopted by Renzi seems the only available, weighted option that Italy has. On one hand, lifting sanctions would mean creating a hostile climate with all the other EU members. On the other, by closing all the communication channels with Putin would result in a disaster for important sectors of the Italian economy.

Although some have malignly noticed a certain resemblance with Berlusconi’s modus operandi –and foreign policy, Renzi doesn’t want to be Putin’s friend. He is only seeking to pursue the Italian national interests within the space left by the EU measures. These meetings with the Russian President are fundamental to let Russians know that “Italy is still a strategic partner and wants to continue being so in the future”.

Therefore, though friendly political relations are limited by tensions, business ones must enforce such view. The Memorandum of Cooperation recently signed by Confindustria Russia (the Italian non-profit employers’ federation operating in Russia) with Delovaya Rossiya, Opora Rossii and with Confindustria Padova (the non-profit employers’ federation of the city of Padova, whose export to Russia have suffered more than any others) to stimulate partnerships and joint ventures between Russian and Italian firms represent excellent examples of how relations can still be developed and strengthened –at sanctions’ time. 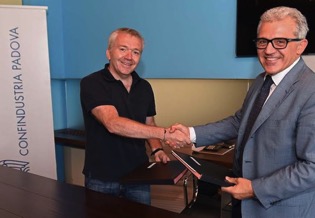