Germany, Europe and Russia: Walls Instead of Bridges

The 25th anniversary of the Fall of the Berlin Wall was hailed with cheerful celebrations in the German capital. Many world leaders sent the usual messages of satisfaction and hope, including Pope Francis's perhaps sloganistic intimation that “We need bridges, not walls!”. Nevertheless after a quarter-century the political balance of the situation unveils, unsurprisingly, that there might not be anymore physical walls marking the ideal division of the countries in the continent, but undoubtedly a palpable invisible barrier is still present. In this article I will delve into the role played by Germany, currently the most influential country of the EU, in the international crisis with the Russian Federation, trying to outline a picture of the current issue.

The celebration ceremony is the best starting point, and it was marked by the evident absence of President Vladimir Putin. This choice may strike at first as being unpopular, as many commentators quickly rushed to point out. Digging deeper under the surface though, it can be viewed as just the straight recognition that celebrations and public speeches become pointless, if they are not followed by facts and actions.

Of course, Russia has not really deserted the meeting. Mikhail Gorbachov, last President of the Soviet Union, received a hero's welcome at his arrival in Berlin. However, his attendance was not just a matter of courtesy, as he had made it very clear beforehand stating that he was going to defend President Putin's policies. Again, from an analyst's point of view, the message is that the door to deescalation is open, but real action is required rather propaganda.

It is unclear how Chancellor Angela Merkel reacted at the announcement of Putin's decision. On the same token it is arguable that an anniversary, where one of the parties does not show up, is hardly an event to be recorded as a success. The Chancellor, being one of the world's most experienced politicians, is of course aware of having effectively attempted everything in and beyond her powers to turn Russia into a pariah in the international community. After all even the in subtly ruthless art of diplomacy you reap what you sow in the end. Therefore, any possible disappointment from her or the German establishment would more likely originate from the realization, that not every nation in Europe is so easily condescending with fulfilling any of Berlin's desires.

Indeed, the Russian Federation is not the only country whose relations grew cold with Berlin. If we take a look no further than inside the European Union itself, it is no mystery that Germany has to be reckoned as one of the preeminent driving forces of the community. This is due especially to its economic leadership, which is complimented by its preponderous political influence on the decisions of the EU's organs. But all great accomplishments come to a price, and those make no exception, as it will be clear in a moment.

As a quick premise, it must be acknowledged that Germany is a fierce promoter of austerity policies for all the European zone, especially in the aftermath of the 2008 crisis, incidentally because those policies favored its own economy at that time. Thanks to that, the country managed to pull itself efficiently ahead of the negative conjuncture so far, re-establishing a growing economy, and earning the informal title of engine of the Euro area in the process. It also true though that those successes are mirrored in return by the ordeals suffered by some of its other European partners, notably Cyprus, Greece, Spain and Ireland. Not to mention some historical founding members of the EU, such as Italy and France, which need to be added to the list. Most of those countries are still struggling through hardships and have frequently criticized the inflexibility of the German stance about the fiscal restraint, except inexplicably falling back into rank each time.

Moreover, the recent scandal of the so-called Draghi-leaks did not exactly plead in favor of Merkel's cause either, as well as being another example of this de facto German supremacy inside the EU institutions. What can be retrieved from the leaked documents from the European Central Bank (ECB) is how Bundesbank President Jens Weidmann zealously hindered any project of intervention of the ECB in the Greek and Cypriot financial crises, and also in other similar cases, although luckily not as catastrophic as those two examples. But above all, the documents highlight once again that Berlin puts its own national interest before anything else.

Geopolitically, this is not surprising nor it is unethical behavior in itself. What is probably less acceptable, hence also the rising of euroskepticism across Europe, is the overwhelming of the common EU organs to implement policies that inevitably have to favor German interests, regardless of the price for other state members and the European partners, especially Russia lately. It should be a generally accepted principle of each participating country to the Union, that the single national interests consists also in the mutual and honest cooperation, but this point is too often neglected in practice.

All that goes up must come down 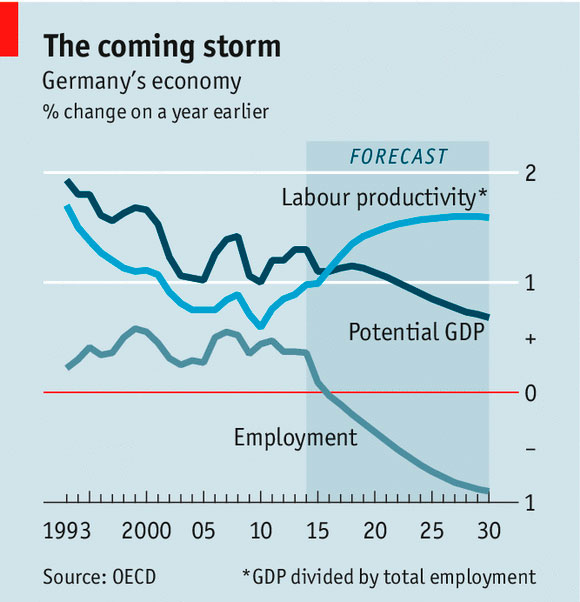 Recently though the scale tipped in another direction, as data suggest that the consequences of this policy may be striking back at its most imperious defender with a boomerang effect.

As a matter of fact in August 2014 Germany's industrial production dropped by a moderately worrisome 4.3% according to Eurostat, insinuating the specter of recession. The impression was inevitably reinforced by a series of other clues, notably the record low hit by German Bond yields, drops in export by 5.8%, and cuts of growth forecasts.

Albeit not being yet a perfect storm from an economic standpoint, those news carry important consequences, both of economic and political nature. Concerning the former, there is an evident risk of a domino effects on the other countries of the Union, many of which are not already doing so well in their own respects. Regarding the latter, since the German diplomatic hegemony within the EU has been deeply intertwined with its flourishing economy, then the risk is the same expressed by an old Latin brocard, which is simply: together they stand, together they fall.

It is just the case to point out that the hit suffered by the German industry is ironically emerging after the enactment of the economic sanctions against Moscow, of which Chancellor Merkel was a most strenuous advocate. This kind of measures produces effects after the elapsing of a latency period, and they have a very high likelihood of backfiring, an occurrence which was likely produced in this instance.

Even though many voices dissenting with the sanctions had warned about this risk, those appeals fell upon deaf ears in Berlin, and it is also legitimate to suppose that there might have been an underestimation of the risk for the German economy. In other words, as harsh as they may seem, the sanctions were fine as long as it looked that other countries would bear the greater burden.

After this turn of the events Berlin's position does not appear as monolithic anymore on the subject. Even though Berlin is still formally putting the blame on Russia for the Ukrainian crisis, the changed circumstances suggest that it is also trying to cautiously put the breaks to escalation of the sanctions, if not even working to make an about-turn on the whole issue.

In a quick succession of press releases the Chancellor first announced that sanctions would stay in place, adding later that they would even be raised, but only those against individuals. Finally, she settled on the position that new economic sanctions are unplanned. A rather tortuous path that essentially halts the introduction of heavier economic measures without losing credibility.

Definitely less tortuous was the meeting of about twenty businessmen from the Oriental Committee of the German Economy with Russian Deputy Prime Minister Igor Shuvalov and Foreign Minister Igor Lavrov. Any idea to try to improve the relations with Moscow is certainly commendable, but the context of the rapprochement reasonably casts the doubt that this is an attempt to protect the German industry behind the back of the other EU members. Of course, in absence of further evidence pointing in this direction, the whole incident can be forcibly dismissed as an inelegant management of the event by the Oriental Committee of the German Economy.

A Wall... Many Walls

Now the open question is whether Chancellor Merkel is planning to smash the invisible wall at East with Russia, as well as the other walls around that are rising higher between her country and many other EU members. That, or the next anniversaries of the Fall of the Berlin Wall are seriously running the risk of not having much left to celebrate.