A Circle of Economic Crisis and Political Instability in Egypt

Egypt is arguably the most volatile country in the Maghreb area, barring Libya, presently. Ever since the three decades of “reign” of former president Hosni Mubarak have come to an abrupt end in 2011, the country has been facing the challenges – and instability – that naturally follow such a radical change in the political landscape. In this article I will zoom in on the current Egyptian economic conjuncture heading into 2017, since issues of economic nature were clearly part of the explosive mix that fueled the so-called 25 January Revolution, whose remnants carried on in the ensuing crisis in later years.

Two elements stand out in this end of 2016. Earlier in December, Fitch confirmed the B rating with a stable outlook on the long-term credit in local and foreign currency of Egypt. Even though I am not one to put too much stock into what credit rating agencies put out in the open, since they are hardly impartial agents, their information is still relevant to many players and as such very likely to have an effect on the markets. In this case, the rating confirmation was issued shortly after the country signed an agreement with the African Development Bank (AFBD) securing a loan of 500 million dollars, as part of a larger operation. Those are two cautiously good signs for Egypt looking forward to 2017, the caution being warranted because any significant positive effect will definitely be experienced in the long run and be subordinated to effective policies, while short term benefits are essentially limited to the fact that credit ratings did not get worse and short term interest can be payed out. Still victory, essentially because the crowd that puts its trust into this kind of ratings is wide, as mentioned above, making agencies like Fitch a force with tangible driving power.

In more detail, in its analysis Fitch pointed out that the country has a high public deficit and an unstable foreign exchange market following the liberalization of the Egyptian pound exchange rate. Unsurprisingly, the report deems the economic and monetary reforms adopted by the Government as positive. I totally disagree with this last notion and it is my assessment that the economic policies put in place in 2016 by President Abd al-Fattah al-Sisi exacerbated the situation. Al-Sisi himself has stated that the reforms need to be hard and painful economic decisions.

Those interventions were among the harshest the Egyptians had to withstand and they were largely dictated by international institutions that “support” the recovery path of the country, notably the International Monetary Fund which demanded a reduction of the general government deficit, a situation reminding of what happened in Europe after the 2008 crisis. The Egyptian government complied with those requests despite their impact on the lives of citizens of the poorer classes, who make up about 30% of all population, according to the Egyptian Office of statistical data. This element is also interesting to be evaluated in view of the AFBD loan mentioned above, which is the second tranche of a soft loan worth a total of $ 1.5 billion distributed by the Bank over three years. The first part of the loan was disbursed in 2015. Since the AFBD is openly and fully behind the Egyptian government economic policy, the path set up until now with reforms is likely to remain unchanged, since there will naturally be conditions to fulfill to obtain the remainder of the loan next year. 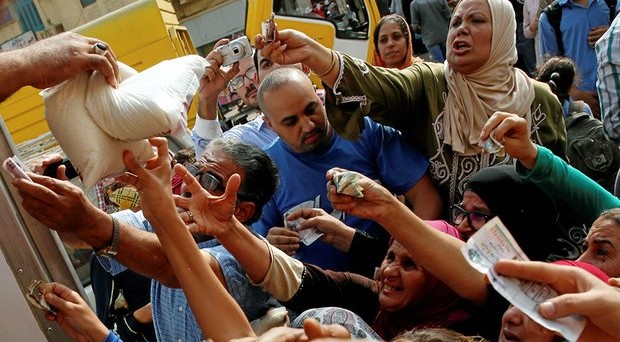 Egyptians waiting in line to get sugar during a recent shortage.

The currency exchange and the resulting price crisis are also major concerns. The Egyptian Central Bank intervened to make the exchange rate of the pound more flexible in November last year, causing a rapid depreciation of the currency that has since reached an average of 17.1 pounds for a dollar. This decision alone has caused the price of goods and services to raise, in many instances at rates that exceeded 100%. The increase of VAT from 13% to 14% further eroded the purchasing power of the Egyptians.

New rules concerning the import, namely the abolition of lists of priorities and the reduction of fundings, resulted in a 19% reduction in imports.

In line with its reform of the price support system, which absorbs 25% of the budget, the Egyptian government has decided to increase the prices in two critical sectors. First, the prices of oil and gas for factories were raised by about 50%, the former going from 1000 to 1500 pounds per ton, while the latter increased from 4 to $ 6 per each million units.

Beside energy, the other sector touched by this policy is that of drugs, where the prices of medicines were increased between 20% and 30%, with all the logical consequences for those in need.

The population is facing a crisis that affects them all around: unemployment, healthcare, energy and the hemorrhage of foreign capital. The crisis is a credible threat to the already shaking stability of the country, the latest example of that being the so-called revolution of the poor (Ghalaba) just a few weeks ago. That attempt failed, but its spirit has not relinished. The Muslim Brotherhood, which supported the protest, will certainly be working low key on a comeback initiative, which is even more concerning considering the orthodox nature of the movement.

The healing of the Egyptian economy – and concurrently of the country as a whole – may be in jeopardy of never materializing in the foreseeable future. Experience shows that in a delicate social and economic situation such as that currently existent in the country, the lack of intervention to address immediate problems often leads to a vicious circle of instability that makes it impossible to implement any sort of long term policies. In plain terms – and probably with a crude example, but one that is very understandable – if people is starving today, they don't care about the bread that will be promised to be put on their tables 5 years from now, nor will they wait that long before acting upon their dissatisfaction. That is especially true when they have already been showing they are very willing to act since 2011 and possibly the only thing holding them back currently – same reason as the Ghalaba revolution was unsuccessful – is that they are believing the vain promises that things will get better soon. However, that bluff can only work for so long.