During the process of preparing and researching for my dissertation «The Role of Eastern Energy Strategy in the Russian Foreign Policy: Opportunities and Threats» at the HSE, I was introduced to this insightful publication «Energy Outlook Until 2035». Today I wish to share its findings and conclusions with anyone who is interested in the oil and gas industry. Before commencing, I just want to give all the appropriate credits and the report link. Please Feel Free to Comment to Discuss!

In developed economies demand is expected to stagnate. In Europe, perceptions about gas demand have changed drastically over the last 4 to 5 years, in fact, if weather is isolated from the equation, then gas consumption has not increased in the last decade. In Asia, particularly Japan, oil demand has been falling for about 8 years. Worryingly, in many of the developed economies, population is not expected to grow which means that demand for gas and oil is likely to stagnate even further. Interestingly, although welfare has increased in developed economies which led to a rise in consumption per person for oil and gas, nevertheless, it was counter-measured by efficiency increases. As an example, modern cars are a lot more powerful today than ever, but due to new efficiency designs, they only require an equivalent to the notably less powerful cars of the 1960’s to 1980’s. Moreover, albeit global energy intensity has fallen globally (even China and Russia has improved) due to technological innovation within efficiency, nonetheless it is unlikely to fall further as the opportunity cost for the next stage of efficiency is too high. Lastly, in regards to developing economies the demand is expected to boom, with 85% of the global growth in oil and gas expected from them. Numerically, with Asia adding most of the growth (i.e. China), demand is expected to grow from 400bcm to around 1200bcm by 2035, in contrast to the almost non-existent growth in Europe or the developed world.

- Developing Countries are Under Pressure:

A harmony must exist between infrastructural, legal and political foundations, before a state can capitalise on its energy wealth, but today, most developing states do not have such a setup.

Infrastructure will play a critical role in developing countries as energy imports rise in them, and exports swell from them (as they constitute both major exporters of energy and importers) – but most are not ready or may not be infrastructurally ready by 2035 as demand rises. It is perhaps unsurprising that the sector of the energy industry that will experience the most growth is transportation or midstream, in contrast to power generation or upstream production, and refining or downstream. In the Russian case the problem is more significant as to replace and just upkeep the current levels of production until 2035 (gas and oil), will require a massive investment of $2.7 trillion – that is around $1 trillion more than Russia’s annual GDP.

Legally wise, it is argued that alterations within the overall legislation and more so on monopolistic laws can lead to a cost reduction of around 2/3 in many of the cases and in Russia. As a fact, only 47% of the world’s gas is sold under regulated pricing, with this figure being so ‘high’ because the US market is 99% free. If unfairness, wastages and lack of competition is removed with correct laws, positive results can be achieved.

In certain countries, the connection between the energy sphere and politics is almost undistinguishable as national energy firms are made to sustain their states, with their revenues. For instance, Venezuela uses its energy wealth to directly pay for its social security, with prices needing to be at around $140 per barrel to break-even. Likewise Russia, which mainly fulfils its budget with oil revenues not gas exports, needs to see market prices at $113 per barrel. Only, Saudi Arabia needs a modest $80 per barrel to satisfy its budget [albeit on a personal note – I have seen many other estimates closer to $120-140 per barrel]. In all, judging by the fact that record oil prices stood at $147 per barrel in 2008 and may never reach that again, some states that need close to that record figure may be in political trouble as recent prices hovered at the $100 mark.

Undoubtedly, Russia is an energy superpower, but unless it is able to reduce its own energy dependency – both in terms of its internal consumption and reliance on exports for its budgets – there could be serious problems. Firstly, it currently consumes a huge 53% of the energy it makes, and albeit it supplies 8% of the global energy needs, the figure could be higher. Further, this figure is currently increasing against the promised efforts to stop this development. It would not be that detrimental if Russia was in fact developing its local energy economy, in fact, it would even be beneficial to develop local consumption, but most of this increasing consumption is due to wastage and old infrastructure.

Russia will need to carefully consider the trade-off amid maintaining its current levels of production and the cost of developing new sites. Officially, Russia has said that oil exports will fall a little, and production is already at full capacity, but the main question for oil will be – would it be worth it to develop new sites? In regards to gas, capacity will remain steady, but a similar question should be posed. Fields like Yamal and Shtokman require high prices for their production to be financially feasible; with returns of 10% to 12% for the energy giants to participate. Finally, perhaps if Russia continuous to do well with its demographic campaign it may offset some of the costs by developing a local economy and demand, thus making exports less expensive.

LNG demand will increase, particularly in Asia, as developing economies will search for more energy. As a consequence other LNG users will see price rises, for instance Japan will see continuous increases in prices for the next 20 years; especially now as it is disabling its nuclear reactors after the Fukushima Disaster. It will have a serious impact on the already tentative Japanese economy, especially as it has no own energy reserves, making it a premium market for all exporters. 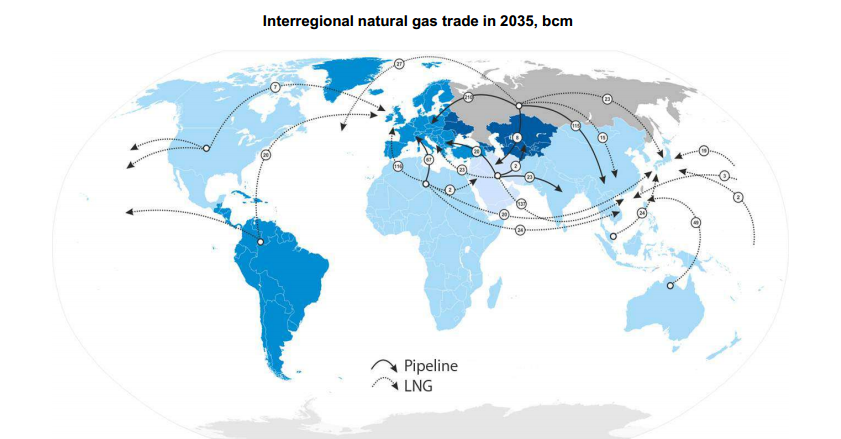 The US ‘shale gas revolution’ has made this previously substantial net-importer of gas into almost a self-sustainable entity, with a net-equal position between its imports and exports. USA even had to convert its now useless LNG terminals (which it first built at a massive cost to assure gas supplies in early 2000’s) into shale gas export stations; albeit their potential is limited due to original LNG terminals being inflexible. Reason behind the original revolution was the high prices for oil and gas in 2007-2008, which is incredible as in a way the conventional energy lobby, somewhat, shot themselves in the foot. Currently, oil shale in its 2 years of mining is not as impressive as shale gas, but the latter had 5 years to get there. In all, by 2035 shale oil will likely to make the US also self-sustainable in oil. In all, the effects of the shale gas revolution have been highly positive (at least in the short term if one neglects the enormous environmental damage shale production causes), as gas prices in the US have fallen by about 3 times. Consequentially, low prices have led to job creation and GDP has received a boost in its growth, helping against the negative effects of the financial crisis. Nevertheless, conventional oil and gas will still remain high in global demand, as it will take more than two decades for the world to adjust to any major changes within the energy field.

A shocking statistic, which I recommend needs further analysis, suggests that a 2% change in unconventional gas, will lead to a huge 10% change in gas spot prices of conventional gas - with an impact on pipeline prices also likely as negotiators use every event in their bargaining arsenal. Gas markets are not interconnected, and even though prices are based on regional specificities, apparently states will negotiate with shale developments in their mind. A real game changer could be unconventional gas developments in Poland and China; in the case of the latter especially as it holds the world’s biggest reserves of shale.

- There is Future in Alternative Energy and Renewables… in the Future:

Renewables will make steady progress, rising from the current 1% to around 4.5% of the global energy total. There has been a breakthrough in costs for renewables leading to an increase in production, but in most energy producing states the opportunity cost is still too low for their introduction; which will mean their role will be limited in the foreseeable future. Interestingly, 30% of the renewable growth will come from Asia.