Alongside my typical journalistic duties at ‘Oil & Gas Eurasia Magazine’, I tend to daily scan both Russian and Western media outlets, news stands, twitter profiles, oil companies press releases and alike - for major news, interesting articles and possible leads within the energy industry. Today, I want to share with you some of the findings in a liberal leaning The New Times (2013) article: “Shale Klondike” (March Edition, 2nd Week, №8, 277) – which I heard about from the radio and decided to buy. If  statistics outlined in the article stand up to the test of time, the US shale fever could substantially impact the energy league table. I also include some personal insight and pictures for clarity as I go along, please feel free to leave a comment – lets make these blogs interactive! The New Times – a Russian weekly – reports that the US Shale Revolution is picking up pace at unprecedented levels, mirroring Klondike Gold Rush. It certainly took its time, as original discoveries of shale were made centuries ago, whilst first large scale production begun around the 1970’s; but, still in 1990’s and early 2000’s no one quite knew how to produce shale on an industrial and financially viable level. However, as it appears, 1990’s technological breakthrough has finally come to fruition.

In 2000 shale gas accounted for less than 1% of the US energy mix, but in 2011 this figure has exploded to 34%, or 214 billion cubic meters. Currently, 16 US states have shale operations. As a result, US natural gas imports fell by 45% whereas LNG import decline by 19% since shale inception. Impressively, by 2015 the overall energy figure should increase to 43% and by 2035 to 60% – if correct, making US the leading gas producers in the whole world, although that is a very high target.

Characteristics of US Market:

First crucial reason for Shale Revolution occurring in the US, and arguably as many observers believe it will only be successful there, is USA’s relatively open and liberal market. Chesapeake Energy, which is now one of the leaders in shale gas production, was launched with just $50,000 by its founders Aubrey McClendon and Tom Ward; it now makes $11.6 billion profit and hires 7,600 staff. One guesses The New Times has made a big omission here, as it is not possible to start an oil or gas company on that sum due to an each individual well costing around $3 million to bore, depending on depth, geology and geography – with companies needing tens if not hundreds wells to make production viable. Nevertheless, the figure probably represents legal costs for setting up a new company, which is substantially easier in the US than in majority of other places, like ‘Ease of Business Report’ or alike indicate. Also it is institutionally easier to attract investment, creating a business climate in which US firms experience strong comparative advantage over their foreign counterparts.

Second crucial reason is USA’s entrepreneurial spirit and business mentality. Devon Energy, the biggest firm in the Barnett Shale area, was started by George Mitchell who could not sell the company throughout the 1990’s, but personal pervasion led to a successful sale of the company in 2002 for $3.2 billion. Devon Energy transformed Barnett Shale from a geological puzzle into the most desirable gas and oil location in the US. Devon Energy now has 5,000 wells, which increased profitability 6 folds and increased turnover from practically zero in 1971 to $15 billion today. This is a stellar example how one individual or one company did not give up. To copy or even outdo such success stories elsewhere is hard, as it require generational changes of mentality alongside serious formal and informal institutional alterations – which is a major task for many energy exporting states.

Overall, shale gas production in the US has been started by independent firms looking for profit in a similar fashion to gold diggers going into the unforeseen – with success being determined by key economic principle of ‘efficiency’. Cost had to be minimal and production had to be quick of the ground. As a result, the industry is much more efficient today especially in comparison to some of the other giants of energy world; this makes the whole industry more secure against external threats or weaknesses as it has developed from the roots, not the trunk. Obviously, no revolution is exclusive of turmoil, as recent scandals involving Chesapeake Energy become a prime example; it is viewed by some analysts like a financial puzzle, similar to that of Enron, but most think it will avoid bankruptcy and similar fate to the ex-US energy heavyweight.

Recent Peak in US Shale:

The peak of shale fever was in 2009 when ExxonMobil purchased XTO Energy for $31 billion, thus becoming the biggest producer of shale gas in the US. In 2010 Royal Dutch Shell purchased East Resources Inc., one of the biggest shale gas companies in the Appalachian Mountains for $4.7 billion. Finally, Chevron in 2011 bought Atlas Energy, major independent shale producer for $4.3 billion. In essence, we see how the US independent business, small and medium producers, have developed and became efficient – so they could in turn be purchased by big corporations as fully packaged projects. This way risk is taken by small producers with negative effects of failure not being gargantuan, but success meaning that venture capitalists that travel down to this new Klondike can create businesses that they could later substantially profit from. It is hard to think of another country where a similar situation of mutual gains occurs.

In just the last 5 years, 100,000 jobs have been created causing a buzz throughout Fort Worth, Dallas and Houston; traditional capitals of the US energy industry, particularly the last one. As Daniel Yergin (one of the leading individuals in US energy) argues currently 1.7 million people are employed by the US energy complex with this figure expected to rise to 3 million by 2020. At the same time, the federal budget should see an inflow of $113 billion. Therefore, shale fever is not only profitable for independent venture capitalists and large firms who avoid placing risks on themselves, but also it is good for the whole economy particularly at the time when recession fears loom. We have to remember that energy prices are crucial not only at the pumps, but in almost all of our activities as any product or service requires energy to produce, meaning that expensive energy reduces economic output as individuals have less disposable income which is very serious issue in net-importing nations. Hence, it is unsurprising that US pushes, politically as well as economically, for energy independence, albeit some questions remain about the possibility of exporting shale - as many in the US argue it should be aimed predominantly at the home market.

China is eager to jump on the Shale Revolution and aims to produce 100 billion cubic meters by 2015. Firms like Shell, Chevron, Chesapeake Energy and Devon already participate in Asia through joint partnerships – as China’s command economy forbids free market interaction. However, as Wood Mackenzie analysts in The New Times article point out, such target is unrealistic as China has a complex geological frame, it lacks water for fraking (hydraulic fracturing – the process is illustrated bellow) and its prevention of direct foreign participation does not help meet those high expectations. In addition, China’s exceeding reserves of shale gas are questionable, as the reclusive state is known for manipulating true facts and naturally does not permit easy access. Also, shale gas is naturally hard to evaluate as recent reports have emerged in the US that some wells may run dry quicker than anticipated. It will be interesting to see how the issue with water develops particularly, as China has recently begun to re-divert its major rivers and canals to restructure waterways for its mass population; particularly in the big cities that lack water. Surely, water heavy fracking and dense population – with possibility of contamination due to chemicals used in the method or gas released into the water make it unwise? 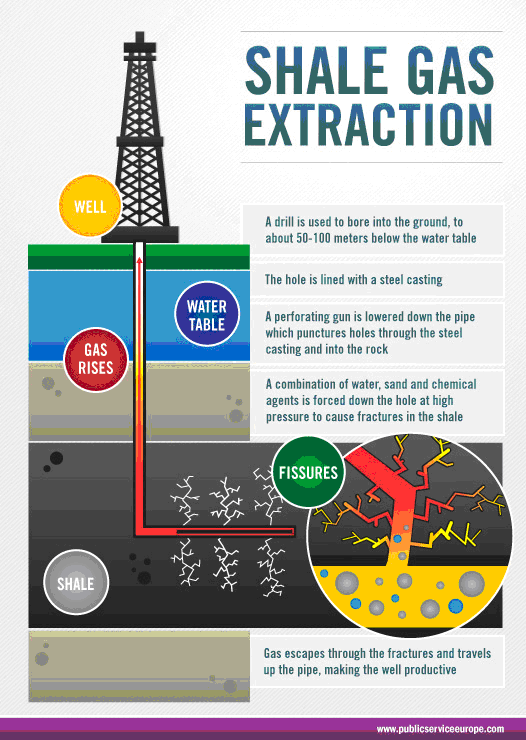 European countries like Great Britain, Germany and Poland, as Chatham House sees it in The New Times article, will not make a substantial contribution to the shale gas revolution in the immediate future. Although they have begun developing shale since the end of 2000’s, technical factors like difficult geology in Europe and high density population, as well as, institutional factors like environmental legislation and taxation do not allow for mass production. US market may well be most open and friendly for shale production in the West, but Europe is currently concerned about water pollution and other side-effects of fracking. On 1 April and 27 May 2011 two earthquakes with magnitudes 2.3 and 1.5 were felt in the Blackpool area, UK; these earthquakes were suspected to be linked to hydraulic fracture treatments at ‘Preese Hall Well’ operated by Cuadrilla Resources Ltd. Production was resumed only on 13 December 2012 after UK wide suspension was lifted. Nevertheless, shale gas will play a role in about 5-10 years as Chatham House analyst argue – as technology is constantly improving with almost all leading firms now onboard. One is sceptical about European and Chinese prospects, but without innovation in business there is only decline.

Aside from traditional energy suppliers, the world should benefit as in 2015 the first LNG terminal will be built in the US on the Pacific coast to export shale gas to Japan – where current gas prices stand at around $600 for 1000 cubic meters – that is much more than $400 paid by Europe ($500 paid by Ukraine). Further, in 2016 US should begin exporting shale gas to Europe. Traditional energy suppliers will need to keep a close eye on these developments and they may well be forced to soon drop prices for natural gas to make shale LNG imports less appealing – all will depend on the final price which may well be very low as US shale is incredibly cheap (at least aside from subsidies and other hidden numbers). It is too late to debate whether more actions was needed earlier, but certainly these developments cannot be ignored and the traditional suppliers must act quickly in increasing efficiency: so costs could be reduced to make their products competitive. As experts at VNIIGAZ argue, an institute for natural gas, large scale shale production in Russia does not make economic sense before around 2025-2030. Russia has plenty of natural gas, the most in the world, and realistically it does not need shale at least for now, but its traditional product must be competitive so it does not miss the gravy train which may well soon pick up speed.