What Is Holding Back the Northern Sea Route?

The Northern Sea Route (NSR) maintains a special status in political, economic and military discourse in Russia. The NSR is a critical component of Russia’s identity as an Arctic nation, as a potential source of economic development and as a means to establish the state as a great power. The NSR and Russia’s Arctic borders are also essential to its military doctrine, maintaining second-strike nuclear capabilities on the Kola Peninsula and deterring enlarged NATO presence in the region. The Russian government has reiterated in consecutive strategic policy documents that the NSR will play a key role in the country’s future economic plans. 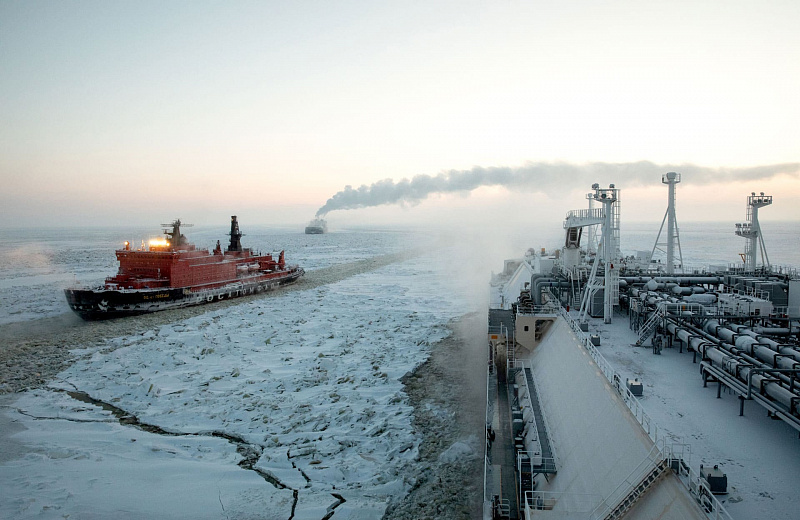 Development of the NSR has received high-level support for many years but the returns on this support thus far have been underwhelming. In the Strategy for Developing the Russian Arctic Zone and Ensuring National Security through 2035, the government outlines its ambitions for shipping along the NSR. The Russian state intends to invest heavily in infrastructure along the route—including ports, airfields, railways, and search and rescue facilities. These investments are aimed at facilitating an increase in cargo transport along the route from 10.7 million tons in 2017 to 80 million tons by the year 2024.

In the year 2020, only 26 ships managed to transit the entirety of the NSR carrying 26 million tons of cargo. This disappointing number can partially be attributed to the global economic slowdown inflicted by the COVID-19 pandemic, but it signals that Russia’s grand ambitions for the NSR are far from being fully realized. What are the factors that are keeping Russia from making its NSR dreams a reality? Are the barriers to development that are currently in place likely to change or is the NSR likely to remain a project with underwhelming returns for decades to come?

A significant contributing factor to the unrealized potential of the NSR is the Russian government’s strict and volatile regulatory environment. The Arctic region in general, including the NSR, maintains a fairly restrictive regulatory environment that favors state-owned or well-connected companies while excluding many foreign investors. This regulatory environment has not only hampered the ability of the NSR to become a major shipping corridor but has also impacted the Russian oil and gas industry in the High North. Russian shipping regulations currently require that oil and gas transited along the NSR must be completed by Russian-built or flagged vessel. This regulation is intended to invigorate the ailing Russian shipbuilding industry, but the efficacy of this regulation is questionable at best.

The domestic shipping industry at this time does not maintain the capacity nor the expertise to satiate demand for Arctic shipping. Major resource extraction operations in the Arctic region, most prominently the Yamal LNG megaproject and its operator Novatek, have expressed concern over this regulation in an open dispute with the Russian government. Due to the fact that the Russian shipping industry is, at present, incapable of meeting the demand for ongoing projects, Novatek negotiated an exemption for Arctic-class LNG vessels currently used for transport along the NSR. These existing vessels, and a number of vessels ordered prior to the regulation’s implementation, received an exemption in exchange for Novatek ordering an additional 15 Arctic-class LNG carriers from the new Zvezda super-yard in Russia’s Far East. It remains to be seen if Zvezda will be able to deliver these vessels on time and on budget, deepening concerns about the feasibility of NSR transit and resource extraction capacity with such stringent regulations.

There are also concerns that the flag-flying regulations may be weaponized by the Russian government in political disputes. The volatility of the Russian regulatory environment is a particular concern for foreign companies interested in investing along the NSR. The NSR is a politically charged shipping corridor with attachments to national identity and high-level government intervention in the project. There is concern among foreign investors that concessions granted to domestic companies will not be extended to non-Russian entities.

India and China have sought similar exemptions as Novatek in order to facilitate greater investment in the region and along the NSR but the Russian government has signaled its reluctance to do so at this time. Other regulations of concern to foreign investors include the requirements for icebreaker escort, the use of Russian pilots when transiting the NSR, and the cost of insurance for transit along the Route. The strict and volatile regulatory environment and costs associated with adhering to said regulations are prohibitively expensive for foreign investors (in combination with other factors), and the Russian domestic shipping industry currently lacks the capacity to fulfill government targets for transit along the strait.

There are currently many barriers to international involvement in projects along the NSR in addition to the strict regulatory environment. The threat of sanctions for states and private enterprises engaging with the Russian government and state-owned companies involved in the operation of the NSR has undeniably impacted the potential for greater international involvement.

Effective navigation along the NSR is also incredibly challenging and expensive at this time. Not only is there a lack of infrastructure to facilitate the level of transit desired by the Russian government, but other logistical factors such as coordinating icebreaker escorts, refueling along the route, communication infrastructure, and search and rescue operations are significant barriers to greater international involvement. The advantages of the NSR, such as shorter transit times, are made negligible due to the massive logistical and financial hurdles associated with the route at this time. Many multinational shipping companies would prefer to use traditional trade routes, such as the Suez Canal, where transit procedures are well-established and understood.

Climate Change and Its Impacts

Despite climate change being viewed as a potential boon to greater transit along the NSR, it also connotes significant challenges. There is undeniably greater access to the route as sea ice recedes for greater periods of time each year, but this is accompanied by more volatile weather conditions that make transit less predictable and more costly. The costs of permafrost thaw and the damage to existing infrastructure can also not be underestimated. Due to permafrost thaw, the likelihood of environmental disasters and accidents along the NSR is a grave concern to domestic and international investors.

Multinational corporations, in large part due to pressure from consumers, have become more aware of the potential for environmental harm and its impact on business. Pressure from consumers and governments has also fundamentally changed the future market for hydrocarbon resources, which constitute the majority of transit along the NSR. Not only has Russia’s main export market for fossil fuels (the European Union) become a more competitive environment for energy consumption, consumers and governments alike are investing heavily in shifting away from the use of such resources. The COVID-19 pandemic and the subsequent collapse in demand for oil and gas during global lockdown measures accelerated the process of an energy transition as many states seek to “build back greener”.

The impact of climate change along the NSR is also evident in the lack of domestic capacity to reach targets of social and economic development. Cities and towns in the Russian Arctic are infamous for their abhorrent environmental conditions. These conditions and other factors—such as undesirable climate and lack of light for long periods in the year—have led to population decline in the region. The levels of population decline and brain drain in the region will make increasing infrastructural capacity and expertise in the region very difficult moving forward.

While schemes such as “shift-camps” and wage increases have been implemented to mitigate this issue, it is unlikely that these solutions will prevent the continued population decline in the Russian Arctic. Without a large workforce to aid in the development of the NSR and facilitate increased transit along the route, it is incredibly unlikely that the goals outlined by the government in successive policy documents will be accomplished.

Is There Hope for Positive Change?

The Northern Sea Route and its development are heralded as an essential component of Russia’s future economic prosperity by many in the government, including President Putin himself. Despite the high-level support for the NSR, many projects remain chronically underfunded and this fact has only been exacerbated by the impact of COVID-19 on state coffers. Regulations intended to resuscitate the ailing Russian shipping industry and to protect the country’s national interests along the NSR are also unlikely to change significantly in coming years and the impact of climate change will only continue to adversely affect the Russian Arctic as a whole.

The NSR simply does not represent a stable environment for international investment at this time, and the factors contributing to this unstable investment climate do not seem likely to change in the near future. Russia also lacks the domestic capabilities to achieve development targets without significant international involvement. States such as China, seen as Russia’s leading partner in the region, maintain such stringent conditions for involvement in projects that investment conditions will continue to serve as a roadblock for greater cooperation between the two states.

OTHER RECORDS
The Turkey-Russia Relationship: Why “Compartmentalization” and Not Conflict?
Carter Boone
Extending the Russia-China Friendship Treaty: To What Extent Will Isolation and Great Power Rivalry Push China and Russia Closer Together
Carter Boone
Renewable Energy in the Russian Arctic and Beyond: Can a Region Dominated by Oil and Gas Contribute to Russia’s Paris Agreement Targets?
Carter Boone
Tags
COVID-19, NATO, NSR, Russia, Russian Arctic, The Northern Sea Route