Renewable Energy in the Russian Arctic and Beyond: Can a Region Dominated by Oil and Gas Contribute to Russia’s Paris Agreement Targets?

In fall 2020, U.K. energy giant BP announced plans to slash its oil and gas production targets by 40% in the coming decades as the company makes an aggressive shift towards renewable energy targets. This shift is representative of a larger trend among energy producers worldwide. Pressure from consumers and investors, as well as the dramatic decline in demand for oil and gas products due to the COVID-19 pandemic, has prompted major oil-producing nations and companies to rethink their approach to energy production. 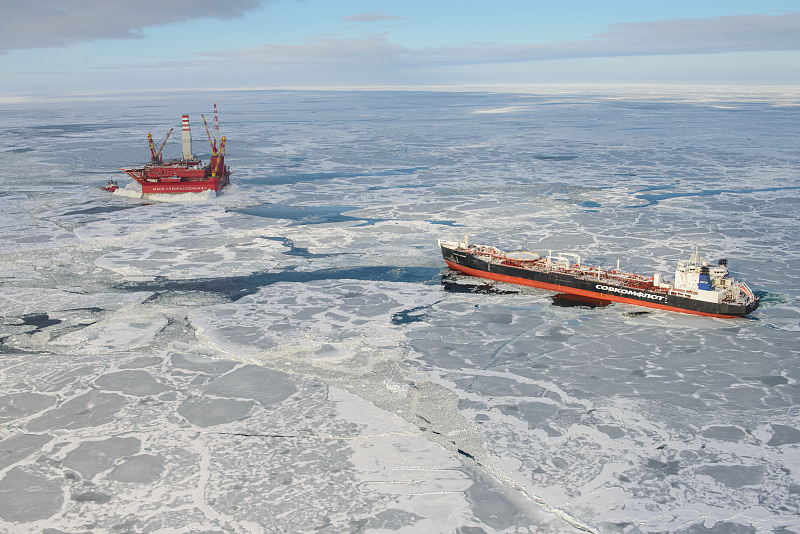 Russia, one of the world’s largest producers of fossil fuels and the 4th largest GHG emitter, is also being forced to reevaluate. Russia’s Paris Agreement climate targets include cutting emissions by 30% below 1990 levels by the year 2030.

The Russian Arctic figures to be a major factor in reaching these targets. The Russian government is eager to reap the benefits of climate change in the Arctic. Increased accessibility to natural resources and the Northern Sea Route will offer new economic opportunities for the state but these opportunities will only increase emissions in the near future. The increase in GHG as a result of resource extraction is also accompanied by the massive amounts of carbon dioxide trapped under a rapidly thawing permafrost. There is currently 1,700 gigatons of carbon dioxide stored in the Siberian tundra, twice the amount currently in the earth’s atmosphere. Thus far, the Russian government has signaled that it is likely to continue investing heavily in cleaner burning LNG, hoping to own a 25% market share in the coming decades.

Although LNG does represent a cleaner alternative to coal and diesel fuels, there is still room for renewables to become a vital component of the energy mix—particularly, in the Arctic. What renewable energy solutions exist in the Russian Arctic? How valuable can these solutions be and where can the Russian government best focus its efforts to achieve its emission targets as stated in the 2015 Paris Climate Agreement?

What is the current state of renewables in the Russian Arctic?

At present, the state of renewable energy in the Arctic region is fairly minimal. This situation is not unique to Russia. Many Arctic communities are sparsely populated, remote, and receive energy from individual generators rather than large-scale power grids. As Aleksey Chekunkov, Minister of Development for the Far East and the Arctic, has pointed out, Russia is a massive country with low population density in the Arctic and the Far East, where developing a large-scale power grid powered entirely by renewables is unrealistic. These remote communities value stability and consistency in energy supply above all else. For Arctic communities across the globe, this typically means reliance on diesel-powered generators.

The cost of transportation via Northern Delivery is incredibly expensive and logistically challenging irrespective of the environmental toll of burning diesel.

Several Arctic states have—with varying success—introduced initiatives intended to reduce dependence on diesel. The United States has implemented the Renewable Energy Fund (REF) in Alaska where $250 million USD was allocated to help fund 73 projects currently in operation.2 In Canada, the Energy Innovation Program allocated 49 million USD to support renewable projects and the Canadian Renewable and Conservation Expenses program.3 These projects are intended to alleviate the burden of high up-front investment costs in the transition from diesel to renewable energy in remote communities. The upfront costs of investment are high for the energy transition in Northern communities, but the potential for savings and the environmental benefits are undeniable. De Witt, Hlynur, and Valfells note that the annual savings for displaced diesel as a result of the REF alone amount to over 70 million USD annually.4

Despite the high costs of transitioning to renewable energy in the Arctic, the potential for positive returns on that investment is undeniable. The Russian Arctic, indeed, has witnessed some success in the field of renewable energy, albeit with some caveats. There is significant potential in the Russian Arctic for wind and solar energy production, and some government programs have started trying to harness the power of renewables. The Kolskaya Wind Farm currently under construction north of Murmansk will be the largest wind park in Russia, expected to produce 750 GWh per year.

One caveat in the renewable strategy of Russia and other Arctic states is that this project and others like it are constructed in an area with sufficient sources of clean energy available. Murmansk Oblast currently maintains an energy production capacity of 3633 MW, split almost evenly between nuclear and hydropower. This power generation capacity is already surplus to the needs of Murmansk Oblast, as 21% of the power generated through these facilities is transferred to Karelia while another 5% is exported to the Nordics.

Although surplus power generation is not inherently negative—this energy can essentially be exported to other markets for profit—it does have a negative impact. The construction of projects such as the Kolskaya Wind Farm allows the Russian government to demonstrate its commitment to alternative sources of energy in the Arctic region but it does not serve the Arctic communities most reliant on fossil fuels, such as the remote communities that rely on Northern Delivery and diesel generators.

In the Russian Arctic, most resources and projects are concentrated in the more densely populated Kola Peninsula where clean energy such as hydroelectricity is already widely available. Greater potential for reducing the dependence on fossil fuels in remote communities exists in improving the efficiency of the existing infrastructure or replacing the existing infrastructure with greener power sources. Small-scale projects, such as biomass power generators for individual dwellings or smaller remote communities, are one solution that has received some attention in recent years due to their reliability. Other smaller-scale projects include hybrid diesel-wind powered generators and solar farms but the issue remains that governments, Russia included, are more focused on larger-scale infrastructure developments such as the Kolskaya Wind Farm.

Is the situation likely to change in the Arctic?

The Russian Arctic remains an area ripe for change and opportunity in the fight against climate change. The region experiences the effects of climate change far more acutely when compared to other Russian regions. Despite this, Russia’s plan to meet its Paris Agreement targets does not center on Arctic solutions. The Russian Arctic at this time is a region dominated by resource extraction projects, which is unlikely to change as climate change allows for greater accessibility to the wealth of oil and gas reserves that lay beneath the ice. Russia instead intends to focus its efforts on carbon sinks, such as the vast forests of Siberia, to reach its Paris targets.

This solution is not unique to Russia; Canada also intends to utilize its large landmass and low population density to embrace the solution of carbon sinks. Canada, like Russia, also pays considerable lip service to embracing renewable energy solutions in the High North while also admittedly allowing resource extraction to dominate the region.

The Arctic suffers from a certain degree of path dependence. Long seen as uninhabitable but rich in resources, governments have prioritized profiting from the Arctic’s natural resources leaving those who live in remote communities and service these projects as an afterthought. This attitude remains prevalent today. Many of the renewable energy schemes and subsidies described in this paper are geared towards industry in the Arctic region, whereas small-scale, capital-intensive projects that may improve the livelihood of Arctic communities are still left underserviced.

Russian leadership is also not incredibly enthusiastic about the prospects of renewable energy in the region. Aleksey Chekunkov has stated that the government believes LNG to be the best solution moving forward for cleaner energy in the region. There is also a lack of incentives for Russian companies to heavily invest in the transition to renewable energy in the Arctic. These companies lack the technology available in other Arctic states and the incentive of measures such as a carbon tax. The lack of government incentive in the form of a carbon tax may negatively impact Russia in the near future as political entities such as the EU consider future tariffs on CO2 emissions.

The lack of urgency in transitioning to renewable energy and the absence of enthusiasm for small-scale, capital intensive solutions in the Arctic will not only adversely affect the livelihood of Arctic communities but the Arctic environment and industry alike.