‘Brexit’ and ‘Belgradentry’: Serbia’s Accession to the EU after Brexit

As European Commission President Jean-Claude Juncker admitted in his annual speech to Members of the European Parliament[i], the European Union is going through an internal existential crisis, caused by the accumulation of several problems, with Brexit being the straw that broke the camel’s back. This situation leaves the Western Balkan states who want to join the EU, particularly Serbia, who remains the most advanced in the negotiations for accession, uncertain and worried about the speed of the enlargement process. Now that the UK has decided to leave the Union and will launch the process in the upcoming months[ii], some Serbian experts predict that EU member states will turn to themselves, which might slow down the enlargement process and Serbia’s accession[iii]. The fears may have been strengthened by the fact that Juncker has not mentioned anything about enlargement in his ‘State of the Union’ speech[iv].

In response to these concerns, EU officials have tried to reassure that the integration process will continue despite Brexit, as stated during the recent Western Balkans Summit in Paris[v]. Further encouraging signs were the openings of negotiation chapters 23 and 24 (the rule of law, the judiciary and human rights) in Serbia’s accession process. Before his most recent visit to Belgrade, the Commissioner for the ENP and enlargement negotiations, Johannes Hahn, encouragingly said that “EU commitment to Serbia's EU path is firm as demonstrated by the opening of four chapters in Serbia's accession process”. However, as Hahn also rightly mentioned, “difficult challenges lie ahead” in Serbia’s path towards EU membership despite the official optimistic rhetoric[vi].

One of the major challenges on Serbia’s road towards EU accession remains the management of the relation with Russia. Serbian President Tomislav Nikolić recently admitted that the ties with Russia will remain “a big obstacle in finishing membership negotiations”[vii]. While openly advocating for alignment with the West, Vučić’s foreign policy also seeks to preserve a good relationship with Russia. The foreign ministers of both countries recently stated that their relationship has the “character of a strategic partnership”[viii]. Moreover, these ties with Russia are not appreciated by the EU. The EU Representative to Serbia, Michael Davenport, has stated that Serbia’s “special relationship with Russia should not undermine the process of European integration”[ix]. In the near future, the EU will probably expect Belgrade to align with European foreign policy and impose sanctions on Russia, which Belgrade refuses to do at the moment.

A scenario that is currently discussed among experts is that the EU’s crises, particularly Brexit, will reduce the European leverage on Serbia, and open the doors for Russian influence. Polls have demonstrated an increase in positive attitude towards Russia among the population, which pro-Russian groups could exploit. For instance, the Radical Nationalists, who, under the leadership of Vojislav Šešelj, became the third largest party in parliament after the April elections, may use Brexit as a reason to question the EU and to advocate closer relations with Russia[x]. 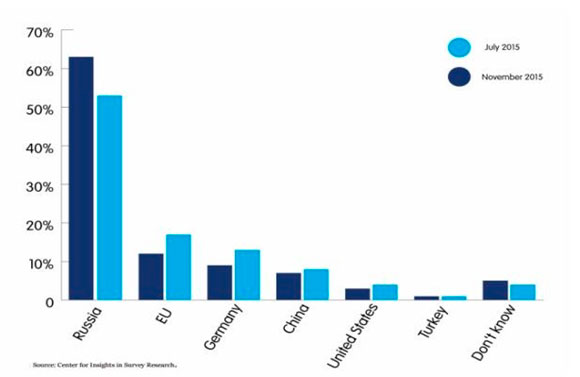 Yet, the success of this scenario is not guaranteed. Serbia’s relationship with Russia is mostly based on military or economic interests such as energy relations. Indeed, Serbia’s energy sector is majority-owned by Russia's Gazprom, making Serbia dependent on Russia for gas imports[xii].  Russia and Serbia share Slavic Orthodox cultural ties, however the idea of learning Russian or studying and working in Russia does not appeal to most of the Serbian youth. While Russia’s soft power and the arguments of pro-Russian organizations may have been successful among the Serbs who are frustrated about the reforms linked to the EU accession process, overall the European perspective remains more attractive, particularly in terms of education and work. Moreover, economically speaking, the Eurasian Economic Union cannot be a viable alternative to the opportunities brought by the trade ties with the EU[xiii].

Despite Brexit, the EU continues to remain committed to Serbia’s accession negotiations. However, progress is slow, and will be even slower as other issues become the priority in EU affairs. While the slow tempo might frustrate Serbian officials and society, this will not automatically lead to the growth of Russian influence, at least not in Serbian political institutions. Thus, Brexit will have some effects on the Serbian population’s perception of the EU, but it is unlikely to radically reverse the pro-European trend.

Both the EU and Russia will continue to play important roles in Serbia, as maintaining influence there is important for the material and ideational interests of both players. In terms of practical interests, Serbia’s cooperation in solving the refugee crisis is important for the EU, while Russia needs Serbia’s cooperation in the energy field. In terms of ideas, the continuation of Serbia’s accession is important for maintaining the idea of EU’s normative attraction, whereas for Russia, good relations with Serbia maintain the narrative of the pan-Slavic exceptionality and Orthodox identity[xiv]. It remains to be seen whether Vučić’s new government will be able to continue balancing these two directions.

For now, the accession procedure goes on despite Brexit. However, while pursuing the European path, Belgrade still maintains its “special relationship” with Moscow. As this is a serious obstacle to its accession negotiations with the EU, Serbia will need to manage these relations in one way or another.

[iii] “It is essential for Serbia to continue with reforms after Brexit,” European Western Balkans (24 June 2016), https://europeanwesternbalkans.com/2016/06/24/it-is-essential-for-serbia-to-continue-with-reforms-after-brexit/

[xii]Aleksandar Vasovic, “With Russia as An Ally, Serbia Edges Toward NATO,” Reuters (3 July 2016), accessed from http://www.reuters.com/article/us-serbia-nato-idUSKCN0ZJ06S

[xiv] Jarosław Wiśniewski, “Russia has a years-long plot to influence Balkan politics. The U.S. can learn a lot from it,” The Washington Post (19 September 2016), accessed from https://www.washingtonpost.com/news/monkey-cage/wp/2016/09/19/heres-how-russias-trying-to-sway-opinion-in-serbia-and-the-balkans/

OTHER RECORDS
“The World in Disarray”: Is An Update of the International System Possible?
Anna Nadibaidze
Tags
Brexit, European Union, Serbia, Russia