European Union and the Vexed Question of Russian Gas

Winter is approaching and the European Union, following the lead of the U.S.A., is firmly persisting in its policy of sanctions against the Russian Federation. Yet the prospect of closing down of Gazprom's pipelines, which cover about 30% of the gas requirements of the European area, seems now to be worrying the political establishment of Brussels. Whether or not those fears are rational is a subject of this article, which will explore the possible scenarios and developments, as well as the geopolitical and economic consequences, if the dispute were to involve the delicate gas sector.

Gas crisis and Ukraine, not exactly a new issue

For starters it should be recognized that the European countries had already been pondering the possibility of a gas crisis with Russia well before the sanctions were formally adopted, or being put under consideration. Those were logical concerns, stemming from a collection of issues, which are far from being a new subject at all.

Firstly, it is well-known that half of the European gas import from the Federation has to cross Ukraine's territories. Therefore, given the political instability of the area, there is an inherent risk of disruption of the supply to the Old Continent, for unforeseen developments of the local situation.

Secondly, there is the long lasting disagreement over unpaid bills between Kiev's government and Gazprom, a situation which notably led to the 2006's and 2009's gas crises. Meanwhile this debt keeps growing, reaching the significant figure of 4.5bn dollars[1], as late as of June 2014.

Understandably each of the Member States has ever since been looking forward to implementing solutions to avoid a repetition of those past experiences. One worthy example is the development of the South Stream pipelines, which aims to free the interested parties of the transport risks, by deviating the gas line path outside the Ukrainian area.

Certainly the Union's leaders had those precedents clear in mind, which arguably were also the primary reasons for their concerns about the gas provision and for their looking for alternatives. In contrast, the fear of Russia's retaliations appeared only later in the timeline, concomitantly with the talks concerning the beginning of the sanction campaign.

This element correctly suggests that the deterioration of EU-Russia relations is but an emerging factor, one definitely more functional to be exploited in the press releases than to really add a higher degree of exposure in the gas dependency area.

EU's sanctions, accusations and battening to the hatches

Nevertheless EU countries opted for a precautionary approach, trying to avoid bitter surprises during the most vulnerable period of the year, by filling up most of their gas storage facilities[2], under the exact pretext that Russia might unexpectedly cut the supply.

Austria reportedly attained full capacity early in September, according to a spokesperson from gas group OMV[3]. Likewise, other countries of Central and Eastern Europe followed this example and they are either at or near complete replenishment of their reserves. The names include: the Czech Republic, Poland, Slovakia, Serbia, Hungary and Italy[4]. Thus, this measure increases, at least partially, their resilience for the upcoming cold season. Of course the EU area is likely not completely impenetrable in case of shortages, but it is nonetheless in pretty good condition.

Notably this whole process took place without encountering any interference from Russian part, despite an isolated incident, which deserves further attention. Early in September some of the aforementioned countries stated that their gas supply from Russia had been reduced to different extents.

Gazprom's reply cited technical difficulties, stemming from an unexpected increase in the demand[5], which was inflated by the effort to top up the storage plants and in some cases pushed even further by the re-export of the combustible toward Ukraine. The incident did not repeat itself and normal delivered volumes were restored.

Therefore Russian acquiescence on this front tends to exclude any will to abuse Europe's reliance on imported gas a leverage for geopolitical pressure during the winter, as that would have required a preemptive attempt to hinder or slow down the building up of the reserves.

Russia is not looking forward to freezing European households

This interpretation is reinforced by other observations which, considered overall, suggest that Russia has no motive or intentions to starve Europe for gas, but rather all the interest in keeping the supply lines in operation.

For example, it is not a secondary consideration that in 2013 Gazprom's exports to the European area alone reached the highest peak since 2008 at 161.5 billion cubic meters[6]. This is also an important 15% increase over the previous year[7], with net sales amounting to about 1.56 trillion rubles[8], making Europe the most important buyer. Despite this achievement, the company's profits fell by 41% in 2014's first quarter[9].

Any actions that would threaten the gas provisions to Europe would only worsen this performance, with a high likelihood to result in either a failure or a Pyrrhic victory in the geopolitical struggle. 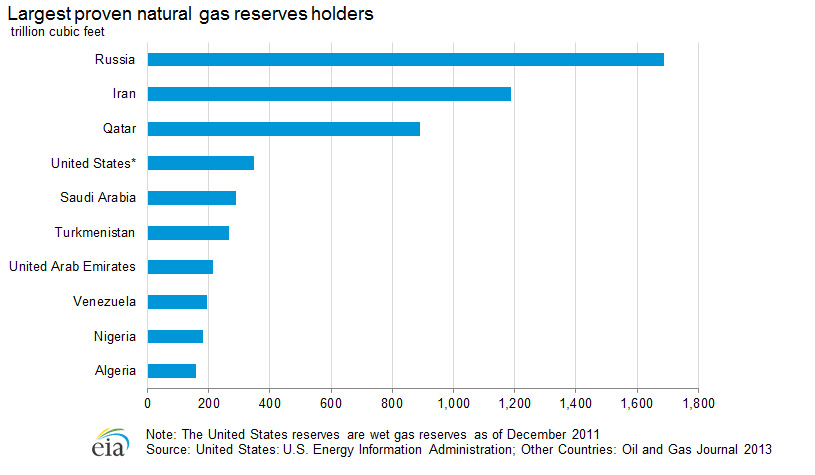 It should also be remarked that Russia so far has preferred a fairly gradual approach to its current issues with the EU over Ukraine, limiting itself to symmetric responses to the sanctions. This is coherent with historical antecedents, that highlight how Russian diplomatic style has always been markedly subtler than tit-for-tat strategies, as the German Economy Minister and Vice-Chancellor has clearly reminded in March, stating that: "even in the darkest hours of the Cold War Russia respected its contracts"[10]. This is to be contrasted with the fairly proactive stance of the establishment of Brussels, which pushed their allegedly diplomatic efforts to the point of raising the sanctions to level three in just a handful of months.

Energy cooperation: a road for reconciliation on other issues too?

Overall it is to be inferred that, since fears of Russian retaliations in this area are not well supported by evidence and both contenders would have more to lose than to gain in that scenario, gas might actually reveal itself as being the common ground to build agreements to solve other current issues, hopefully leading to an easing of tensions.

Indeed, this appears to be one of the fronts where Russia is currently at work, especially with its pushing for the advancement of the South Stream project, an effort that could relieve Europe from the worries of a gas crisis. A signal in this direction was given on September 16th, when the head of Gazprom’s international projects department, Alexander Siromyatin, announced that works for the construction of the Serbian section of South Stream were to start in October[11], accordingly with a contract signed in July.

The statement could be interpreted as a gesture of goodwill and to probe Brussels’s intentions, but sadly it was received with coldness by the recipients, enticing the prompt reaction of the European Commission. On the following day Energy Commissioner Guenther Oettinger's, through his spokesperson Marlene Holzner, delivered a rather ominous message, supporting the idea that while Serbia is nominally not bound by European rules, not being a member of the Union, nevertheless it should abide to the European legislation.

That would be so, the message continues, because South Stream ultimately seeks passage though European territories. This was an implicit reference to the Bulgarian part of the pipelines, whose construction was already halted twice in June and late August, due to alleged infringements of the European law[12]. Nonetheless it is worth clarifying that the Serbian segment will be built independently from the Bulgarian one, the two will be connected together only when both are completed, therefore raising the questions about the real purpose of the Commissioner’s remarks.

Moreover the statement did not fail to mention, perhaps untimely, that Serbia is a candidate to become a member of the Union and therefore it is expected to conform to European regulations regardless. Definitely not the most forthcoming response for reconciliation with Moscow, but one that is possibly motivated by the attempt to force the outcome of the trilateral round of talks between Russia, Ukraine and the EU, which are currently being held in Berlin[13]. 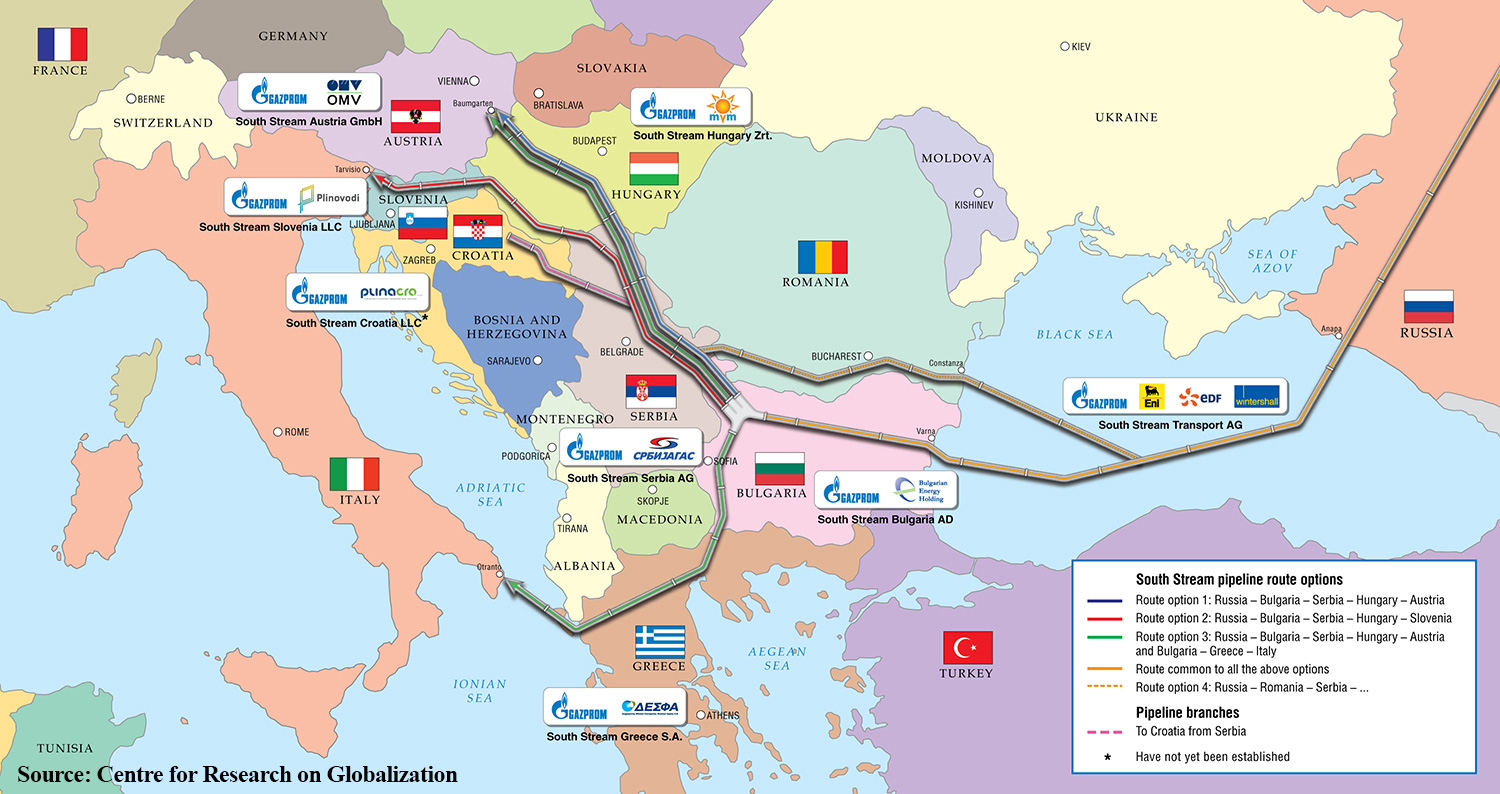 Among other topics, the meeting is centered on the discussion of issues concerning the gas price for Ukraine and its impending debt. The European Union might be trying to put obstacles to the South Stream project in order to grant concessions for Ukraine, most likely in view of its association with the EU.

This is quite evidently a dangerous bargaining position.

On one side South Stream aims to assure a steady provision of gas to the EU itself, which should have clear interests in this accomplishment, in the absence of alternatives to Russian supplies. On the other side, the issue of the unpaid bills is an internal matter for Russia and Ukraine. Therefore Europe's involvement as a mediator should be limited to the degree where its own energy interests are concerned, a situation which would cease if the South Stream were completed.

So far it seems that during the first session of the talks, Kiev agreed in principle to pay $3.1 billion of its debt and to accept the offered gas price. In exchange Gazprom will resume supplying gas to Ukraine[14].

Whatever the outcome of the conference, the participants are watching carefully the possible repercussions on the sanction program, which is due to be reviewed by the Committee of Permanent Representatives in Brussels on September 30[15].

In conclusion, the geopolitical balance does not support the stance that Russia might willingly retaliate against European sanctions by exploiting its position as a crucial gas provider. On the same token EU leaders should feel relieved of their worries, genuine or exaggerated. It would be convenient though, they quickly realized that critical partnerships, such was that with Russia, need but a moment to be put in jeopardy and decades to be rebuilt.