PUSH and PULL, the double-faced strategy dividing the EU from Russia

The Ukrainian crisis is currently the leading factor weighing on Western international relations, with the EU being caught in an unstable position, torn between the U.S.A.'s pressure on one side, and the economic interdependency with the Russian Federation on the other. This article examines the current state of the issue from a diplomatic standpoint, and the implications concerning European strategic interests.

The discussion revolves around some main points: the drifting of the EU away from the cooperation with Russia and towards the U.S.A., and the connections with the developments concerning both European trade and energy policy. 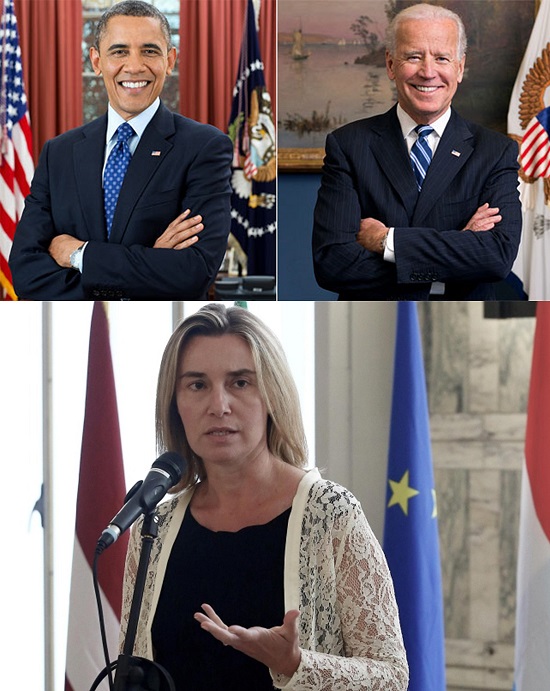 Let us begin with an analysis of the balance of political forces in action, as it is emerging in this later period.

Despite the intransigent tones of Brussels against Moscow, the process that eventually lead the EU to jump on the anti-Russian bandwagon was neither so straightforward nor free of concerns.

A vivid picture of the events behind the headlines was depicted by U.S. Vice-President Joe Biden, during a speech held at Harvard Kennedy School in Boston on October 3, who commented:

“[omissis] that has allowed us to rally the world’s major developed countries to impose real cost on Russia.

It is true they did not want to do that. But again, it was America’s leadership and the President of the United States insisting, oft times almost having to embarrass Europe to stand up and take economic hits to impose costs. And the results have been massive capital flight from Russia, a virtual freeze on foreign direct investment, a ruble at an all-time low against the dollar, and the Russian economy teetering on the brink of recession.”1

News of the statement, which probably revealed more information than intended, quickly reached across the ocean, inducing an embarrassed reaction from EU authorities. A few days later during her confirmation hearing before the European Parliament, the designated High Representative of the Union for Foreign Affairs and Security Policy and current Italian Minister of Foreign Affairs Federica Mogherini briefly dismissed the subject, remarking that:

“There has been a global effort which has been coordinated internationally. The decisions taken in the European Council have never been easy but they have always been independent...and based on...European discussions.”2

On a side note this is quite a change of pace for the Italian politician, who in March, months before being appointed to take on her European role, was showing a more moderate approach:

“If we proceeded on the road of ending relations, we would head towards a world which would be impossible to govern”, she said during an interview for her political party.”3

So, despite Mr. Biden's very forthcoming words, the response of the soon-to-be Head of EU's Foreign Affairs was definitely milder in tone, and it certainly missed a rather delicate detail. Indeed, while Ms. Mogherini addressed the political implications of the incident, even if only en passant, she entirely avoided commenting on the Vice-President's estimation that Europe had to take the “economic hits” from the sanctions.

The back-firing effects of the sanctions are not certainly a new discovery, but nonetheless one that is too often minimized by the European coalition. It could not be any different, considering that it is a very basic principle of modern economies that wealth is produced through the exchange of goods and services for money. This implies at least a bilateral relationship, and when a potentially profitable deal does not take place, which is effectively the purpose of sanctions, then not just one party but ALL the involved parties suffer a loss.

On the very same day of Ms. Mogherini's quick dismissal of the matter, U.S. Treasury Secretary Jacob Lew offered another view of the true extent of the values at stake, which is consistent with Biden's remarks. During an interview at the Peterson Institute for International Economics in Washington, he stated:

“The economic sanctions that were put in place are probably the most sophisticated sanctions regime that has ever been designed.”4

EU leaders are certainly aware of the consequences of these choices on the economies of the area, yet none of them has ever offered a justification of how this policy would protect European interests. On the contrary they skipped this crucial step and proceeded to seal the deal, again according to Ms. Mogherini:

"In the next five years we'll have to review our relations with Russia," and "at the moment Russia is not a partner (of the EU), but a strategic country and a neighbor, above all of Ukraine."5

This is, however, only a small part of the story and there are other angles to explore. Let us turn our attention to the trade partners of the EU now, and observe that while many European goods are not being exported to Russia anymore, markets on the other shore of the Atlantic are eager to replace the old partner and do even more.

On this subject the Transatlantic Trade and Investment Partnership or TTIP is a trade agreement proposal currently under negotiation, which aims to create an area of free trade between the European Union and the United States. In June 2013, the EU gave directives to its delegations to handle the talks6, but the progress was slow and during the first quarter of 2014 there was still much more to be done7. Coincidentally, this is the same period when Brussels finally agreed to adopt the anti-Russian sanctions8.

There is a wide array of issues that caused the empasse. To name a few there is food regulation, which is stricter in Europe, and the case of the chlorine chicken is emblematic9. Closely connected to that, there are also health and environmental concerns10, the so-called Investor State Dispute Settlements11, a general lack of transparency in the negotiations12, and many other issues.

Yet after the EU adopted the sanctions and Russian reacted, shutting the door to many European products, the talks underwent a sudden acceleration, which was not reflected by any improvements in its transparency13 and left many unanswered questions about the previous concerns14. 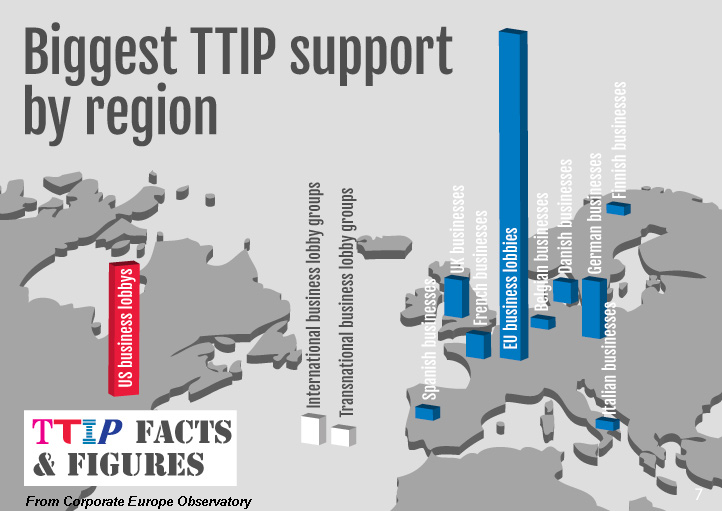 Influential opinions have also put under scrutiny the fairness of the agreement and underlying that the economic benefits would be in reality disproportionately allocated to the United States. Nobel Prize for Economics Joshep Stiglitz went so far as to openly urge Europe not to sign the treaty, during an interview with Italian newspaper Il Manifesto15.

Conversely, the EU, is not leaving itself any other choices really and it is now negotiating the TTIP from a position of inferiority, as a consequence of effectively shutting many sectors of Europe's economies out of Russian markets, and sustaining the wished-for economic hits cited by Joe Biden. Not to mention that the conditions of the economy in European area were already worrying to begin with, even without the “independent decisions” of the EU authorities, just to re-quote Ms. Mogherini's intervention.

Gas at All Costs

Another crucial aspect, which the EU is failing to address, concerns its energy policy, considering that no alternatives have been found to the partnership with Russia, especially on the delicate point of natural gas. To be fair, other options have been proposed, but none appears to be sustainable or readily available.

For instance, in late September sources from inside the European Commission pointed out quite optimistically how Iran could become the substitute supplier of gas16, since the country holds the second largest proven reserves of natural gas after Russia. Independent of the facts that the EU imposed sanctions on Iran, and that the existing infrastructures do not have the necessary capacity to meet an increased demand17, this proposal was not received well by the concerned party.

"Now the conditions are not like those when everybody thinks that if Russia stops gas supplies [to the EU], Iran would provide [Europe] with the same [amount of] gas" Iran's President Hassan Rouhani declared18 to Russian Television early in October.

So ruling out this option implies another one is quietly creeping its way back on the scene. Following what has been named the Shale Gas Revolution in the U.S.A., it was believed at first that the same experience could be replicated in Europe. Since then the enthusiasm had cooled down, but it was revived later as a consequence of the Ukrainian crisis. There are two ways for this to happen, neither of which seems to protect European interests. 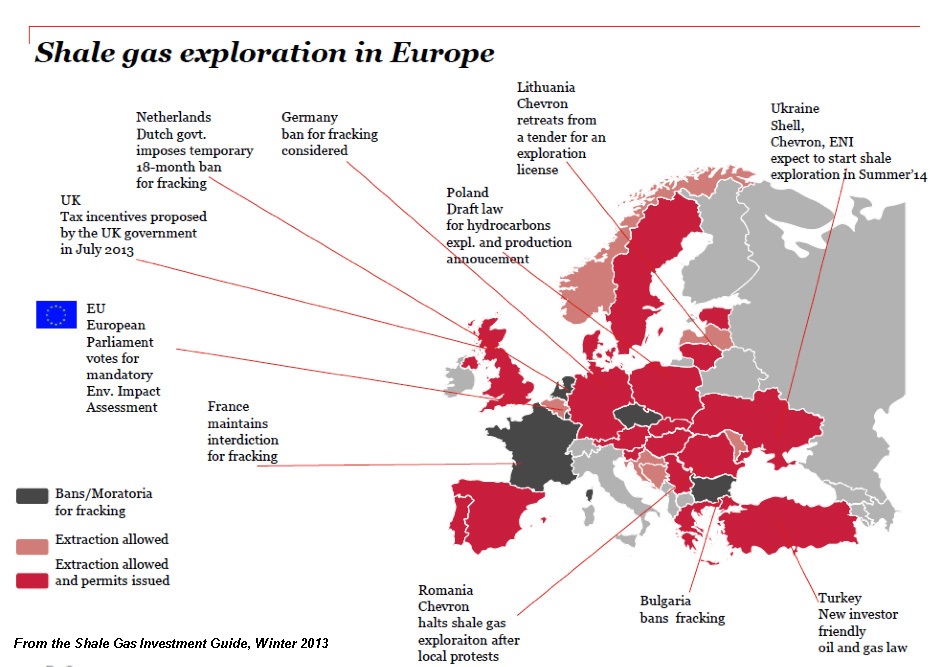 One possibility is to extract shale gas directly in Europe, but there are huge obstacles to this solution. The American experience highlighted the significant environmental and health problems related to the unconventional technology employed to drill shale gas wells, the infamous hydraulic fracturing or fracking. Many of those issues are noteworthy, for example: the very short life span of the wells implies that fracking companies are continuously required to drill new ones, the contamination of groundwater19, the seismic displacement20, the trade secret on the composition of fracturing fluids which were discovered to be often extremely toxic chemicals after a few undisclosed cases21, and the high dispersion of methane in the atmosphere22, which is an even more powerful greenhouse pollutant than carbon dioxide.

When factoring in all these elements it comes as no surprise that the concerns were raised by many voices and the opposition to shale gas steadily increased. For example Los Angeles has already passed a moratorium on fracking23 and a similar measure has been adopted in the state of New York24. When considering that Europe is much more densely inhabited than the United States, it is clearly not possible to follow the American example and every attempt to forcibly do so would result in extremely serious consequences.

The other possibility would be to import the shale gas from America, but this option also presents important challenges. For instance, estimates of the actual quantity of shale gas in the United States' subsoil have been heavily reduced, from the early optimistic forecasts that announced reserves large enough to cover the next 100 years25 of consumption plunging down to only 20 years26.

It is worth noting that this figure refers to internal consumption alone, correctly disregarding exports. This is due to the fact that under U.S. legislation there are strict limitations to the export of strategic assets, such as energy sources. President Obama's administration appears to be currently at work to propose a bill aimed at removing this legal barrier, but helping Europe overcome its energy deficit is certainly not the only reason.

Indeed, shale gas is more expensive to extract than traditional gas. Also the increased production has impacted the internal gas price in the U.S., so that drilling companies are unable to cover the cost of this activity. By giving the green light to export, the revenues would improve, but the likely destinations would be the profitable markets of Asia27, where prices are higher than in Europe, that or Europe itself would have to be willing to pay for the worse deal.

To conclude, Europe is putting a great deal of effort in trying to sever ties with Russia, and by its own admission the Obama administration has spent an equal amount of effort to make sure that its European allies would act this way. On the other hand, it has yet to be proven who will benefit from this divorce, either Europe or the United States, but for now it is clear that European citizens and companies are incurring the greater proportion of the costs.