The Russian Case 50 Years After the Cuban Crisis

It was 1962 and the world had been dragged to the verge of disaster, where it remained, precariously-balanced, for thirteen – seemingly never-ending – days. Fast forwarding to half a century later, it is 2015 and it is impossible not to notice how the hard-learned lesson of the Cuban Missile Crisis appears to have been forgotten. Although the current “Cold War II” hasn't reached the same dangerous peaks of its former incarnation, I maintain that it shows all the signs of a conflict escalating so rapidly, that a revival of the Cuban Crisis in a European setting is not at all far-fetched. Not only that, but this scenario may become reality in the near future, especially given the latest developments in the relations between the West and Russia.

While the spark that lit the fire in Cuba had been shot by the USSR’s attempt to install nuclear missiles right in front of the coast of the USA, this time around the roles are reversed. Indeed, although in international relations there are hardly ever any instances where both parties involved don't share at least a small portion of the responsibility for a crisis – and arguably that also applies to the case at hand – the United States and their allies are the ones who firmly tip the scale in the escalation of the present situation.

The news that the USA are going to place their troops at 200 km from the Russian border – a measure which is totally unprecedented – is a strong indication that diplomatic solutions are not being effectively sought, at least not without throwing into the mix a good deal of forcing of the opponent's hand.

The details of this decision reveal the degree of determination of the USA and the NATO. During a joint conference in Tallin with the defense ministers of the Baltic States a few days ago, U.S. Defense Secretary Ash Carter declared “We'll temporarily deploy vehicles of an armored brigade and its equipment in the countries of Central and Eastern Europe.”

According to documents released in the same occasions the contingent that will be deployed includes 250 tanks, Bradley infantry fighting vehicles and self-propelled howitzers.

Carter stated that this is part of a strategy of “European pre-positioning .” Baltic states and other former Eastern Bloc countries have agreed to the military presence, that allegedly “will be moved for training and exercises.”

As observed by American historian Stephen Cohen of Princeton University, this is the first time in history that the United States have deployed their heavy weapons and troops so close to the line of defense of Russia.

The similarities with the Cuban Missile Crisis are striking, with one faction putting their military machine in the backyard of other one. The justification for this move is the alleged role of the Russian Federation in the Ukrainian crisis.

But the dissimilarities are interesting as well, if not more. It is worth noting that what eventually defused the Cuban Crisis was the fact that the American political leaders kept working for a peaceful solution, despite the fact that the military oligarchies of the period were supporting a more heavy-handed approach. As the situation stands now, Western leaders seem to accept the idea of escalating the conflict.

Indeed, not long before the deployment of troops in the Baltic countries was announced, Obama had affirmed at the G7 meeting in Kruen,Germany, that “We need to keep pushing Russia.” He also added “Russian forces continue to operate in eastern Ukraine, violating Ukraine’s sovereignty and territorial integrity.” And to conclude “The G7 is making it clear that if necessary we stand ready to impose additional significant sanctions against Russia.”

Obama's sentiments were quickly mirrored by the other members of the G7 which jointly declared that they would implement “further restrictive measures in order to increase cost on Russia.” It goes without saying that also all comments originating from the EU institution are in line with this view. 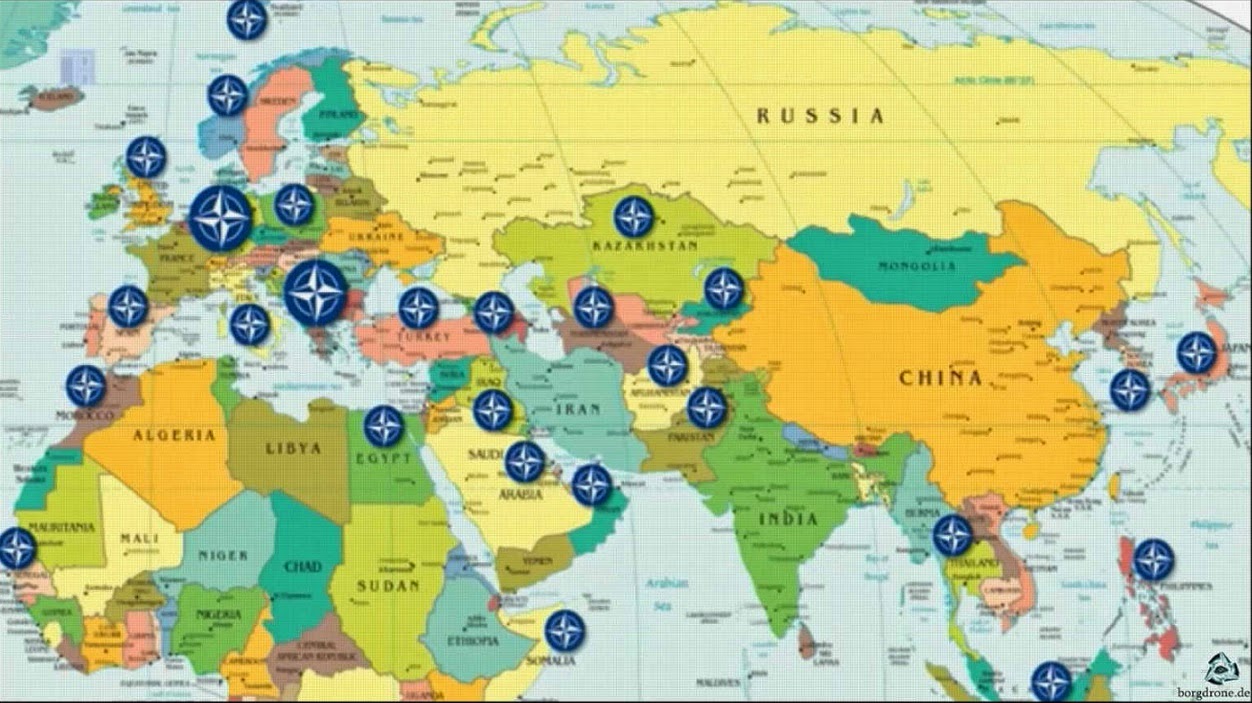 The United States, and by association the NATO bloc, had a good case at the time to run to the fence, as it was intolerable to have a loaded gun pointed directly at their head in an area of vital interest. But, this also highlights the crucial problem with their current strategy concerning the whole Ukrainian affair, which makes their case a lot weaker than it was concerning the Cuban affair, considering that the main accusation against Russia isn't backed up by robust evidence.

This is not to support the view that Russia isn't involved in any activity correlated with Ukrainian affairs, quite the contrary. After all, it would be inconceivable that they would disregard the events in an important area of interests, just as the USA have never been shy to do. But this is where the problem lies. While the extent of NATO's actions – or at least the tip of the iceberg – is under the world's eyes, since the troops they are going to dislocate at the doorstep of Russia are very real, their accusations against Moscow do not stand up to scrutiny.

We are reminded constantly by political leaders on the media that Russian tanks and troops have invaded the Donbass, but as of now we have only their word to back it up. The same word they gave to prove that Saddam Hussein was secretly accumulating mass destruction weapons, save dismissing the whole story a few years later with the bottom line that “well, we were wrong, but we were still right to attack.” The same argument could be brought up regarding the “evidence” of Assad's chemical attacks against civilians, and the list goes on. But back to Ukraine, in an age when spy satellites are capable of reading a car plate there is no justification for NATO not having shown a single photo of even just one Russian military vehicle on Ukrainian territory. Instead the only alleged proof of the invasion appears from less official sources, like resourceful investigative journalist Eliot Higgins – who also cooperates with the Atlantic Council – who tries to substantiate the Russian military presence in Ukraine through the photos posted on social media by Russian troops allegedly deployed in the area. I have nothing but praise to express for the work of Mr. Higgins, but I wouldn't risk a nuclear escalation on a selfie.

Therefore, if it is true that in diplomacy truth is certainly an elastic concept, when it comes to justify military action the West has a proven track record of stretching that truth beyond its breaking point, and the defense of human rights has historically been a favorite among all pretexts. Certainly others too have had the same fault in the past, but that can't be an excuse. Let's not forget that, after all, the URSS deployed warheads in Cuba as a retaliation for the embarrassing failure of the Bay of Pigs Invasion. So, in hindsight, even if the Soviet reaction was certainly short-sighted, on the same token it wasn't completely devoid of some kind of underlying logic, even though they take all the blame in western official history. This also goes to show that demonizing the adversary remains the oldest trick in the book to publicly justify any action aimed at acquiring geopolitical supremacy.

With that in mind, there is one question that needs to be asked. Is supremacy worth annihilation? Because that was the path the world was on during those days in Cuba, and that's the path it is considering walking down now. Back in 1962, neither of the parties gained supremacy over the other by playing this dangerous game, but they managed to avoid annihilation. If the lesson was learned hopefully they will be able to the same in 2015.